In the most highly-anticipated show of the season, Nicolas Ghesquière blended his love of techno fabrics and angular cuts with the time-worn tradition of Louis Vuitton for a vision that was wholly modern, writes Jessica Michault for Nowfashion.com. 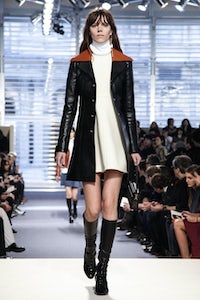 In the most highly-anticipated show of the season, Nicolas Ghesquière blended his love of techno fabrics and angular cuts with the time-worn tradition of Louis Vuitton for a vision that was wholly modern, writes Jessica Michault for Nowfashion.com.

PARIS, France — So it all came down to this. The most important show of the season, the highly anticipated return of Nicolas Ghesquière to fashion as the creative director of Louis Vuitton.

Just stepping foot into the show space defined the beginning of a new era in the history of the storied brand. Gone were all the bells and whistles that had become part of the package of past collections. In its place was a minimalistic design that used natural light and sparse seating. Ladies and gentlemen, this house is now focusing its creative energies 100 percent on what comes down the catwalk.

Earlier in the week at a cocktail for the nascent LVMH Young Fashion Designer Prize, Louis Vuitton’s CEO Michael Burke talked about the easy manner of Ghesquière, how clear his vision was for the brand, and with an almost astonished tone in his voice, how well organised the designer was. Rumour has it that most of the collection was done and dusted by the start of Paris fashion week.

There was certainly a polished feel to this show, right down to the personal note left on each seat from the designer, thanking his guests for sharing his big day with him. “Words cannot express exactly how I am feeling at this moment,” said Ghesquière in the note. “Above all, immense joy at being here, in the knowledge that my stylistic expression is at one with the Louis Vuitton philosophy,” he added.

The collection was an echo of those words. It was a blending of two worlds: that of the designer, whose love of high tech fabrics and innovative treatments is well documented, and Louis Vuitton, a fashion house that prides itself on its commitment to noble fabrics and tradition. On the catwalk on Wednesday was the proof that they could coexist and thrive in the neo-Mod universe Ghesquière created for the house.

The clothing on the catwalk was wholly that of the designer. No referencing  the past, just a crystal clear vision of the brand’s future. One where women like their dresses to be short and a-line or featuring a faux hourglass waist with sexy slits at the hipbones. They want their trousers second skin and covered in a floral print or cut in slick vinyl. Skirts need to be of the circle variety or more daringly crafted in a spiral design with tabs of glossy leather mimicking feathers. And coats must be cut in stiff and sculptural luxe skins like a patchwork of leather or crocodile.

There were quite a few key takeaway pieces in the show. Model Maggie Rizer wore a sporty chic top with an ethnic pattern motif zipping across the middle that should fly out of stores. As will those textural spiral skirts. Even something as simple as one of Ghesquière white shirts will endear itself with Louis Vuitton clients once they see that it features a monogram lace collar. And the final two leather slip dresses, that featured a slash of tweed slicing across the skirt at an angle, were rather sexy options from the designer. Especially considering the side zipper that can easily be opened all the way up to the waist.

As for those all-important accessories, there too Ghesquière had a few fun ideas up his sleeve. The boxy clutch bags called “Petite-Malle” that mimicked the look of the famed Louis Vuitton travel trunks was both cheeky and clever. Ditto the bags that peeked out of snap on protective covers. As for the shoes, they were probably some of the most practical Ghesquière has ever offered up: ankle boots wrapped with leather straps or cut in the Louis Vuitton ribbed Epi leather.

You didn’t need rose colored glasses, even though one model was wearing a covetable pair, to see that this collection had done a fine job at laying the foundation to take Louis Vuitton to the next level in the future.