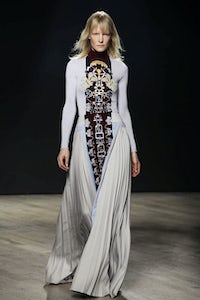 LONDON, United Kingdom — Mary Katrantzou is back at the helm as one of the brightest stars during London Fashion Week. After a lukewarm showing which saw similar styles of manipulating print in the last few seasons, Autumn/Winter 2014 felt like a breakthrough moment. Katrantzou swapped a monolithic collection based entirely on her psychedelic digital prints for a more nuanced, fuller wardrobe.

"In my career, where I am now, I wanted to do something different in terms of the silhouette, the lengths, the simplicity and in terms of creating a more complete collection," she said.

Truth be told, Katrantzou showed a variety of options from cocktail dresses, cropped peacoats, embellished full-length gowns to an oriental jacquard pajama suit.  According to the press release, the textures were of the "lexicon of luxury" as Katrantzou featured appliqués, brocades and plenty of handwork — an unprecedented breath and depth of design for Katrantzou.

Safe to say she has transcended the domain of textile design, a faculty in which she did most of her training, to a way of designing that is more three dimensional. The embroidery and embellishment details on some of the pieces were breathtakingly intricate and never once did they get in the way of fluidity of the garments.

Katrantzou, who seemed pleased with the outcome of the show, declared backstage, "The lace has 750,000 stitches, I think it really pushes you as a designer." She added, "Every season you try something new. This time it is about the craftsmanship but to do it properly. In previous seasons we never had the time because of limited resources. This time there were many pieces that didn't even get to the catwalk."

In line with a more refined direction, Katrantzou looked to exercising some restraint to inform a more sophisticated aesthetic, cleaner lines and a more polished finish. She quipped, "I started with uniforms because I wanted to do something that is more pared down. I wanted people to not think that I am just about excess."

The inspiration for this collection too had a stronger narrative, which evolved from investigating uniforms to be about symbolism. A plethora of scout badges, military insignias, hieroglyphics, and '60s road signs were all stitched together to make a neo-lace fabric that was then cut into flouncy cocktail numbers and elegant evening gowns. Some of them fitted like a body glove, rich with handiwork. They culminated in a look that was half-Aztec, half-Byzantine mosaics.

Appropriating symbolisms is in itself quite metaphorical of a young designer exploring to find her own codes and values. It is a timely step for Mary Katrantzou to expand her brand from just producing novel prints to a dynamic, well-rounded label that tailors to the diverse needs of its customers. The future looks bright for Katrantzou as her focus is on positioning the brand more competitively. It is after all especially integral for smaller designers to get on the right footing commercially in their formative years, and Katrantzou summed it up perfectly by saying, "What I see happening for the next two three seasons is communicating who the customer is."