The label’s #DGTheGreatShow catwalk presentation was scheduled to take place in Shanghai today.

SHANGHAI, China — Dolce & Gabbana has cancelled a high-profile catwalk show in Shanghai following an outcry over what many in China perceived to be a racist marketing campaign.

A video posted on Weibo Monday of a Chinese model attempting to eat Italian food with chopsticks was taken down after less than 24 hours, but widely shared on both Chinese social media platforms and Instagram.

The social media storm was made worse by comments attributed to Stefano Gabbana and Dolce & Gabbana’s official Instagram accounts on Wednesday, the day the brand's #DGTheGreatShow catwalk presentation was scheduled to take place in Shanghai.

In what Dolce & Gabbana claims was the result of a hack, the brand's social media accounts featured derogatory comments about China and Chinese internet users. Though quickly removed, screenshots of the comments were widely shared on Chinese social media, along with the trending hashtag #BoycottDolce. The Weibo hashtag #DGTheGreatShowCancelled has been read 540 million times, and mentioned in 74,000 discussions.

The news was first reported on Diet Prada's Instagram. "We’re in constant contact with our Dieters and they’re on pretty high alert for Stefano Gabbana’s antics," said Diet Prada founders Tony Liu and Lindsey Schuyler in a statement to BoF, referring to their community of followers. "A lot of the topics we post can be pretty niche, which is great, but this is overt racism on a massive global scale that’s hard to ignore." 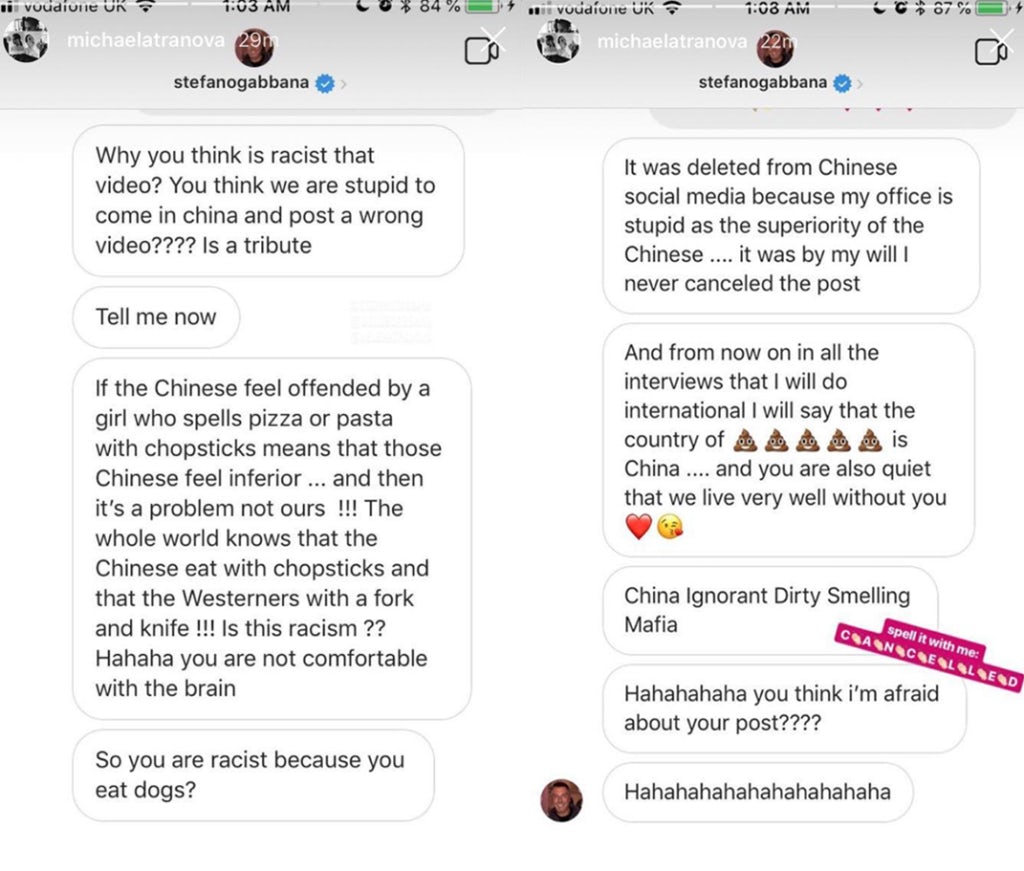 Show invitees have been informed that the 500-look runway event will no longer go ahead. The brand was reportedly forced to cancel the presentation by local government authorities, but this has yet to be independently confirmed. Over 15 Chinese celebrity guests, including Zhang Ziyi,  Li Bingbing, Chen Kun, Wang Xiaoming, Donnie Yen have expressed that they will not be attending the event, in addition to international and local models such as Lucky Blue Smith and Estelle Chen, who were slated to walk the runway.

This marks the second high-profile outcry over racist messaging from Dolce & Gabbana in only 18 months. A previous #DGLovesChina campaign depicted Beijing in a way that Chinese internet users felt looked backwards and underdeveloped.

Both Gabbana and co-founder Domenico Dolce have been accused of making politically insensitive statements, from referring to babies conceived by in vitro fertilisation as “synthetic”, to refusing to support the right of gay parents to adopt. The duo has also described gladiator sandals as “slave sandals” and were quick to endorse First Lady Melania Trump. Gabbana in particular has a history of posting insensitive comments on social media, and came under fire for calling Selena Gomez “ugly” on Instagram in June, and the Kardashian family “the most cheap people in the world” in July.

Though the designer duo have been known for using social media to voice their controversial opinions, upsetting Chinese consumers could have far-reaching commercial consequences. According to Bain & Company’s latest report on the luxury market, Chinese consumers account for an estimated 33 percent of global luxury goods spend, a share that is likely to hit 46 percent by 2025. Seeing as Chinese support can make or break a brand's performance, how the label manages the controversy will be critical for its future success in the market.

Dolce & Gabbana could not yet be reached in China or Milan for comment. According to a post published on Dolce & Gabbana's Weibo account on November 21, the event has been rescheduled, and the brand has apologised for the inconvenience caused.

Dolce & Gabbana reposted Gabbana's 'Not Me' screenshot on its Weibo account, accompanied by the following statement, which mirrors the brand's post on Instagram: "Our Instagram account has been hacked. So has the account of Stefano Gabbana. Our legal office is urgently investigating. We are very sorry for any distress caused by these unauthorised posts, comments and direct messages. We have nothing but respect for China and the people of China."