LONDON, United Kingdom — Richard Quinn was told only two days before his Autumn/Winter 2018 presentation: her Majesty Queen Elizabeth II, Britain’s monarch, who had never before attended a fashion show, was planning to sit front row before presenting the emerging 29-year-old designer with the inaugural Queen Elizabeth II Award for British Design.

His collection featured head-to-toe prints and floral headwear. At the last minute, Quinn also introduced more silk headscarves than he had planned in a nod to those worn by the Queen, who sat at his show between Anna Wintour, editor-in-chief of American Vogue and the artistic director of Condé Nast, and Caroline Rush, chief executive of the British Fashion Council, who, along with Sarah Mower, the BFC's ambassador for emerging talent, was instrumental in getting Quinn on the radar of Buckingham Palace.

It was more than a fashion moment. The Queen's appearance at Quinn's show was covered widely by everyone from Vanity Fair to The Daily Mail. It was also one of the most Instagrammed, tweeted and talked-about moments of London Fashion Week. And it gave the fledgling label a major boost. “The scale of my label just blew up,” Quinn told BoF.

Within 24 hours, the size of Quinn's following on Instagram leapt from 18,000 to 50,000. His posts, which usually attracted 1,000 to 2,000 likes, now netted upwards of 7,000. Amal Clooney, Thandie Newton, Adwoa Aboah and Giovanna Battaglia Engelbert wore his designs on the red carpet. And retailers have since taken notice. 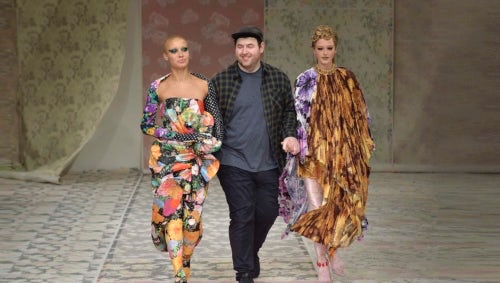 Quinn’s first collection, for Spring/Summer 2018, certainly attracted a degree of attention and was picked up by 15 stockists, mostly based in the UK, including Liberty London and Machine-A. “Richard Quinn’s graduate show was bold, powerful and moving. And his sell-through has been extremely strong — reaching 100 percent,” said Stavros Karelis, founder and buying director of Machine-A. "Our customers like Björk have shown great preference for Quinn’s garments."

But after the visit from the Queen, interest surged, more than tripling the number of stores that carry Quinn's clothes and netting him accounts around the world. Today, Richard Quinn is stocked by over 50 retailers, including Bergdorf Goodman in the United States, Lane Crawford in China, 10 Corso Como in Italy and Dover Street Market in Japan.

MatchesFashion’s buying and fashion director Natalie Kingham said it was his “use of nostalgic prints,” “distinctive colour” and “elevated couture shapes” that resonated with her. Elizabeth von der Goltz, global buying director at Net-a-Porter, was impressed that “there was so much talent for someone who just graduated school,” she said. “He has a very couture hand, which is evident in his use of shapes and volumes.

Mower was critical to arranging the Queen's prize and her Majesty's attendance at Quinn's show. When Mower first met Quinn at London's Central Saint Martins, the world's most famous fashion school, she found the designer's ambitions of opening his own print studio commendable but "possibly an unattainable long-term dream." Quinn surprised Mower: "Within a year he had done it. He showed a practical entrepreneurialism I have never seen before from someone so young," she said.

Indeed, Quinn managed to open the print studio with the €50,000 he received as winner of the H&M Design Award in 2017, and has since attracted clients include Charles Jeffrey and Mimi Wade as well as larger fashion houses like Burberry, JW Anderson and Ports 1961, helping him to bolster his business. He has also collaborated with British department store Debenhams as well as MatchesFashion, which currently has an entire room dedicated to the designer on the top floor of their new retail concept, 5 Carlos Place. “We are launching a home collection with Quinn in November,” said Kingham.

"I see a long-term prospect for him in homeware as well as fashion," Mower continued. "A long way along the line, I see a possible future for him to become a new-generation equivalent of Cath Kidston — one of the most successful commercial print brands this country has produced.

According to Quinn, who currently has a team of four, including his sister who manages the sales side of the business, the label is set to announce more collaborations this year.

But for now, the designer is focused on his upcoming show at London Fashion Week on Tuesday, which Quinn said was inspired by “different eras of fashion” that he hadn’t explored before, including “old kinds of couture shows, where you see definite groups of girls throughout” divided into clear themes. “There are silhouettes that I've become accustomed to but there lots that are not, like slinky dresses and light fabrics and using clashing prints in different ways.”