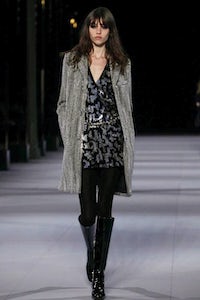 PARIS, France — You can say this about Hedi Slimane, the guy certainly knows how to come up with some seriously sleek and modern mise-en-scène for his ready-to-wear shows. This season the designer’s tendency towards clever light displays were replaced with long mirrored bars that lined the entire length of the catwalk. How were the models going to walk over these? Did the collection’s theme have something to do with stylish hurdle jumping?

No, nothing as quirky as that. Rather, when the show got underway, each bar slowly raised up to stand like a silent sentinel along the edges of the runway. The use of a reflective material to create each bar was a very astute choice, as it became the perfect foil for all of the shimmering sequined pieces that dominated this rock ‘n roll circa the 1960s collection.

Slimane is just coming off of two big back-to-back sartorial wins. He dressed Angelina Jolie in one of his tuxedos for the BAFTA British Academy Film Awards in London last month. Then on Sunday at the Academy Awards, host Ellen Degeneres wore three different couture suits throughout the entire three and a half hour Oscar ceremony in front of millions of viewers.

But on the catwalk, Slimane was steadfast in his belief that the cool kids/rebellious musician look, done with a couture level of craftsmanship, is still the way forward for the Saint Laurent brand.

So there were some great knee high boots worn with leggings, school girl plaid skirts and peacoats in the show.  Rounded and roomy capes were also a favourite for Slimane this season, as were the designer’s perfecto leather jackets, which looked more polished than in the past.

And then there were the sequins.

What was most surprising about all the shimmering designs was how the designer would dampen down the colourful embellishments by covering them with a suit jacket, layered under a classic leather vest or inserted into fabric on a long and lean coat.

When a group of short, all sequined dresses came down the runway together, each of them embellished with imagery from the American artist John Baldessari, it conjured up memories of when Mr. Saint Laurent recreated Monet’s classic irises or Picasso’s sunflowers on tailored embroidered suit jackets.

Marketing genius that he is, Slimane limited these sparkling, artist-inspired dresses to just ten of each kind. Nothing builds desire more than knowing supplies are limited.

The introduction of more patterns and the use of so much embellishment made for a nice change of pace at Saint Laurent. This time, the youthquake Slimane continues to want to create with his collections ended up being more of a tremor rather then any earth-shattering shift in sartorial dress.