SÃO PAULO, Brazil — “The concept of being closer to the consumer might not last forever, but it will last a while. The influence it has on our brands is huge,” says Paulo Borges, founder of São Paulo Fashion Week [SPFW] and chief executive of Luminosidade.

From October 23-28, São Paulo hosted the 42nd São Paulo Fashion Week as a seasonless showcase. Since Brazil’s seasons are opposite to those in the Northern Hemisphere, this would normally be the Autumn/Winter season but Borges took the decision earlier this year to encourage designers to move their collections to the current Resort 2017 season and present in a “see now, buy now” format.

“This was SPFW ‘trans,’” says Borges, referring to the shift the fashion industry is experiencing. “It’s a moment to push designers forward. The ‘trans’ concept means that things are under development. Nothing is set in stone anymore.”
Borges calls this season transitional as his decision has not yet reached the whole market — a few key SPFW designers have not made the shift and say they are not currently considering the move to fashion immediacy.

Last year was SPFW’s 20th anniversary, yet participation waned this season; only 21 brands showed, approximately 35 percent fewer than average. This is partly a result of the country’s ongoing economic and political crisis and partly due to the designers’ own beliefs and budgets.

To blame this reduced participation on the move towards “see now, buy now” misses the bigger picture, though. After two years of economic meltdown that impacted the local fashion industry in a significant way, designers are looking for new strategies and ideas. “My goal is to help Brazil transcend the crisis. It’s not only an economic crisis; everything is being rethought,” Borges says.

Borges says he was quick to embrace fashion immediacy because Brazilian designers need to communicate more directly with local consumers. “It’s still a dialogue. Everybody is rethinking things [but] people here believe in what they’re [doing again]. I don’t know what it means for the rest of the world, but for Brazilian designers it means a lot,” he says.

In Brazil, social networks really exert a big influence on consumer desire here, so we must leverage this moment.

“Some large brands, such as Ellus and Colcci skipped this season in order to prepare for the launch of the Autumn/Winter 2017 collections in March, but most of the brands presented a Resort 2017 collection, as Spring/Summer 2017 was shown six months ago,” Borges explains.

“In Brazil, with the size that we have, the runway is a great branding opportunity. Social networks really exert a big influence on consumer desire here, so we must leverage this moment and make the best of it,” Borges adds.

Animale, one of the largest womenswear brands in Brazil with over 1,000 points of sale throughout the country, was one of the most talked-about moves to fashion immediacy.

“I visited Animale’s shop right after the show to check if they actually had the runway collection. Mostly, it was the same [as the runway collection], but the retail pieces had some adjustments to make them more commercial,” says fashion consultant and Vogue Brazil columnist Costanza Pascolato.

Animale skipped last season’s fashion week in order to prepare for the transition. The brand’s show opened SPFW, and the morning after, the brand’s stores across Brazil opened with the collection that had been on runway.

According to Jatahy, it no longer makes sense to show a collection that consumers will not be able to buy for six months. “It’s a necessity of retail rather than a trial of a something new,” she says. “The challenge was in the effort to change the supply chain from the creative process to production, logistics and retail. But the chain will adjust over time. At first, it’s tough, but in time, the industry will adapt to this new model.”

Other brands took a different approach to the ‘see now, buy now’ concept. Lolitta staged its runway show in the Iguatemi mall, where the event doubled as a shopping experience, allowing guests to buy the runway pieces at the brand flagship on the same floor. And while Lilly Sarti showed her collection at SPFW, 80 percent of those runway pieces went live on her e-commerce site. 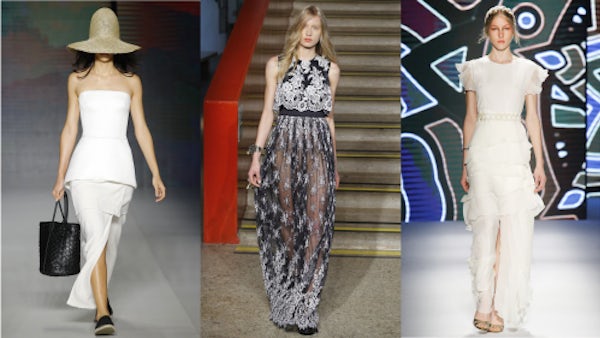 Another interesting case is Alexandre Herchcovitch, who left his namesake brand in 2015, after it was sold to Inbrands Group. Last season saw the launch of his À La Garçonne brand, which is stocked at Opening Ceremony in New York. “As we’re a new brand, we’ve already started in this spirit,” Herchcovitch says. “It’s not about the season, it is really about doing what I feel like as a designer and responding to all the information we have online everyday.”

For his take on fashion immediacy, Herchcovitch completely transformed the À La Garçonne store in São Paulo to feature the runway collection. The store was opened to the public immediately after the show, with 90 percent of the runway items in stock. “Some pieces are one of a kind and they will take to 24 to 48 hours to enter the store, but most of the collection was available for sale right after the show,” he said.

The response to SPFW’s transition to immediacy among retailers so far is mixed. For multi-brand retailers, the new scenario is quite unnerving.

“I think [the move to fashion immediacy] is an overgeneralisation of things,” says Juliana Santos, chief executive of Dona Santa, a luxury multi-brand boutique in Recife, in Brazil’s Northeast region. “Immediacy might only work for a specific audience, who is connected to Instagram 24 hours a day. But there is also another type of consumer who honestly doesn’t care. It can’t be all or nothing.”

“Consumers who will buy something from Céline or Hermès won’t discard their purchases right away. In Brazil, we have high-end clients, who love Reinaldo Lourenço’s dresses and don’t follow social media. They just make purchases based on the quality, design and their own needs,” she adds.

Costanza Pascolato partially agrees. “Mostly, Brazil’s fashion is made for the local malls. Our offer is not very sophisticated so there is not much to look forward to. [That’s why] this adjustment makes sense for Brazil,” she says.

“Very few people look at magazine advertisements to shop anymore; they look at social media to interact with the brands so, for the Brazilian market, this new model should work just fine. [But of course] when we talk about European-style couture or extremely elaborate collections, this kind of rush is almost impossible,” she adds.

But for Herchcovitch, Brazil’s resident design provocateur, the changing of the fashion cycle signals something more profound. “I designed collections for decades that were ground-breaking. My signature was the shock and it provoked change [but] it used to take months for people to relate to the design and understand it,” he says.

“Now we can connect with them right away.”

The Trouble With Brazil’s Luxury Market
A Shrinking Market: Is This Brazil’s ‘New Normal?’
Daniela Falcão, from Political Reporter to Boss of Brazilian Vogue