Sharon Wauchob Sets Up in London

The former creative director of Edun has relocated her under-the-radar label from Paris to London as she takes her business to the next stage.

Sharon Wauchob Sets Up in London

The former creative director of Edun has relocated her under-the-radar label from Paris to London as she takes her business to the next stage.

LONDON, United Kingdom — On Monday at 1pm, Sharon Wauchob will host her first London Fashion Week show at St. Cyprian's, a church in Marylebone once described by architecture critic Ian Nairn as "a sunburst of white and gold."

It’s a description that also befits much of Wauchob's collection, which features delicate camisoles with filigree gold straps, pleated metallic French lace dresses, embroidered bralettes and silky fawn macs. Prices begin at £250 (about $325) for shirts and stretch to coats costing up to £1,800 ($2,341).

While her label is new to London, Irish-born Wauchob is a veteran. Her two decades of luxury experience include stints as Louis Vuitton’s bag designer and Edun’s creative director, and since 1999 she has also run her eponymous label, showing at Paris Fashion Week.

This year, Wauchob relocated her company from Paris to London. “We came to a point where it was like, are you going to go to the next stage or not?” recalls Wauchob in an interview at her new atelier in North London. While Paris enabled her to work closely with French suppliers and keep a relatively low profile in the fashion press, she says, “I know that I was communicating in a very restrictive manner. I pushed myself to be somewhere where I know I’ll probably be more forthcoming.” 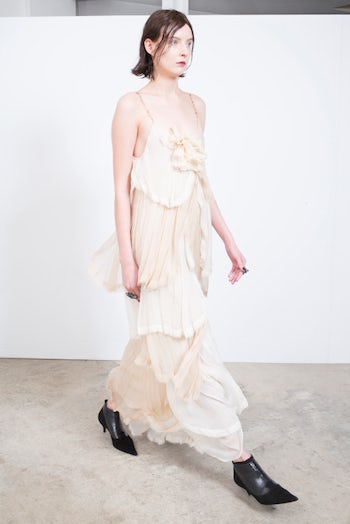 Wauchob graduated from Central Saint Martins with first class honours in 1993, where classmates included Hussein Chalayan and Katie Grand. Her first job was with Koji Tatsuno, after which she joined Louis Vuitton — “without any accessory experience,” — as bag designer from 1997 to 2001.

Wauchob worked under Yves Carcelle, the chairman and chief executive officer who transformed Louis Vuitton into a luxury fashion powerhouse, hiring Marc Jacobs as creative director and spearheading the business’s global expansion. “The bigger houses were having a voice, so in that regard, me starting my collection at the time was a little bit at odds, and probably I was giving myself more of a challenge,” she says, of launching her label in 1999.

In 2009, Wauchob was appointed creative director of Edun, the LVMH-backed label founded by Ali Hewson and Bono to promote production in Africa. “It’s got challenges but it still is a great idea to develop manufacturing and create jobs in countries that have difficulties,” she says.

From 2009 to 2013, Wauchob produced two womenswear collections per year plus menswear for New York-based Edun, plus two collections for her own label back in Paris. During this time, she also had two daughters. It was, she says, “a lot.”

But while some designers choose to press pause on their own brands to take a role at a major fashion house, “We had really good stockists, it would have been a kind of crazy time for me to put it on hold. And I’m glad I didn’t,” Wauchob says.

“I think it’s the same for any designer doing a meaty external project. They have to put 100 percent in both, so the big question is: is that possible?” she asks. “It’s demanding, of course. I think afterwards you come back a more developed creative director, because you collect skills, from organisation to merchandising. It probably makes you a lot stronger afterwards — taking on projects now doesn’t seem a big thing in comparison.” 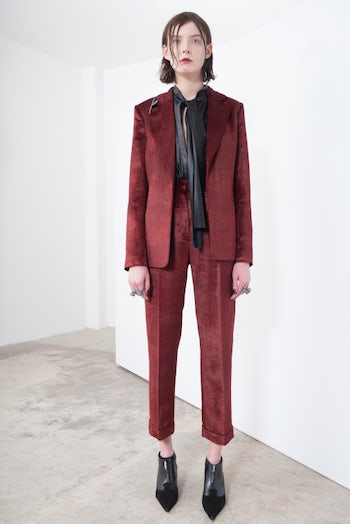 Wauchob left Edun in 2013, when “a few other projects came up that were going to absorb a lot of time and energy from me,” she says. Since, her own label has launched pre-collections and a bag line.

For Spring/Summer 2017, Sharon Wauchob is going into Selfridges — the brand’s most high-profile stockist yet. (Currently, the label is stocked in about 70 stores. Thirty to 40 percent of sales are in Asia, with the rest in Europe and the US — where sales are concentrated on the West Coast.) Wauchob is also expanding her team of less-than 10 people with new commercial hires, and has forecast 22 percent growth for the business this year.

Since moving to London, she’s also receiving more custom requests from individual clients. “That’s kind of unexpected, but an interesting approach because you’re really talking to the girls about what they want to wear,” she says.

E-commerce is also on the horizon — “It’d be silly not to,” says Wauchob — and a physical store, likely in London, is something she plans to look into. “I think the two together is probably necessary,” she says.

Taking the brand to the next level “will involve more product, yes, but it has to be very well-considered,” says Wauchob, whose main product categories are currently dresses and lace, lingerie-inspired pieces. Today’s runway show will unveil a first foray into jewellery — a collaboration with Fabergé — and after making shoes for her shows, but not producing them for sale, the brand will launch a shoe collection next year.

Wauchob didn’t show last season, while she relocated to London, and for the last 18 months, she has reassessed what the brand has to offer. “I went back into examining what are we doing, who’s our customer, are we getting to them?” she says. “You’re not always given permission to change, but I think by the move here — physically moving — liberates you to change.”