With scrutiny on fashion’s environmental impact mounting, the excess of major fashion weeks is increasingly at odds with the public commitments of major brands to operate more sustainably.

With scrutiny on fashion’s environmental impact mounting, the excess of major fashion weeks is increasingly at odds with the public commitments of major brands to operate more sustainably.

LONDON, United Kingdom — 54 London catwalk shows; 32,000 car miles; 20,000 cups of espresso; 5,000 glasses of prosecco. These are among the statistics for last September’s London Fashion Week published by the British Fashion Council to underscore the event’s vitality. But the numbers also tell another story: that of the waste and excess of staging fashion weeks at a time of mounting scrutiny from regulators and consumers.

“Fashion month is a party,” said Orsola de Castro, co-founder and creative director of non-profit Fashion Revolution, which advocates for a more ethical and sustainable fashion industry. “It’s huge fun, but it’s the kind of fun that is no longer funny.”

International flights and hired cars are obvious signs of the toll that fashion week events take on the climate. But there are also show sets, which are often erected for a matter of hours and then sent straight to landfills; goody bags full of disposable free samples; and don’t forget the clothes themselves, which are transported to shows wrapped in plastic.

“Events are temporary, but the waste you leave behind is not,” said Nick Marks, founder and managing director of sustainable production company Ecobooth.

It’s hard to know exactly how severe the environmental impact of fashion weeks is. The groups that organise the events in London, New York, Milan and Paris — the BFC, The Council of Fashion Designers of America, Camera Nazionale della Moda Italiana and La Fédération de la haute couture et de la Mode respectively — don’t collect data on the amount of waste generated by the shows, and haven’t yet conducted an analysis of the events’ climate impact.

Events are temporary, but the waste you leave behind is not.

All four say sustainability is high on their agenda and they are taking steps to drive change. The BFC said it has reviewed all of its suppliers to make sure it is using the most sustainable products available, and has always sought to hire and reuse materials wherever possible. As of September 2019, it will promote designers focused on positive fashion at its London Fashion Week Designer Exhibition, and it has built sustainability into its designer support programmes.

Pascal Morand, executive president of France’s Fédération de la Haute Couture et de la Mode, said the organisation’s sustainability commission is working with members to establish a set of shared tools to help brands producing shows. In Italy, the CNMI published a sustainability manifesto in 2012, focusing on the industry's big social and environmental issues. During fashion week, it uses recycled materials and avoids the use of plastic at events it hosts and in all its locations.  The CFDA has put together an extensive sustainability guide and toolkit that includes a section on events. They also point out that it is the brands, not the organisers, who put on and produce the shows.

For years, the fashion world has operated with little mind for the environmental impact of fashion week. But a backlash against extravagant shows that seem detached from the publicly-stated sustainability ambitions of major brands and their parent companies is growing. In June, Saint Laurent’s menswear show on a hidden beach on the coast of Malibu drew the ire of local residents and officials — and unwanted media attention — for disrupting the local environment. Megabrands like Louis Vuitton, Dior and Chanel are equally known for their opulent shows.

LVMH Moët Hennessy Louis Vuitton, which owns Louis Vuitton and Dior, has had guidelines in place for several years to help its stable of luxury brands produce events in a more sustainable manner. Chanel said it is committed to recovering, recycling, reusing and/or repurposing the materials used in its shows wherever possible, adding that the iceberg it famously trucked from Sweden in to the Grand Palais for a 2010 show would not fly today. “Given how times have changed, it is unlikely we would choose it today,” said a spokesperson for the brand.

Meanwhile, in London, where Burberry Group Plc is one of the few brands to stage a large-scale show, environmental activist group Extinction Rebellion has called on the British Fashion Council to “cancel London Fashion Week” and is planning a series of disruptions throughout the September event.

“The reason to target fashion weeks is that they’re seen as cultural hubs, and culture has a responsibility,” said Sara Arnold, founder of fashion rental site Higher Studio and Extinction Rebellion activist. “We need to understand that if we show all this excess, it shows that we’re not taking this problem seriously.”

Burberry said it has been reviewing the environmental footprint of its upcoming show, and among other steps that are still being finalised, it plans to offset the carbon impact of models and guests travelling to London exclusively for its show.

If we show all this excess, it shows that we’re not taking this problem seriously.

To be sure, the environmental footprint of even the major fashion weeks represents a tiny fraction of the industry’s overall impact. By far, the biggest culprit is the sector’s manufacturing supply chain, which spews out a toxic mix of carbon and polluting chemicals with little oversight.

However, fashion weeks — and particularly the main ready-to-wear shows in New York, London, Milan and Paris — are significant because they are some of the most prominent moments on the fashion calendar. And with the rise of social media, they increasingly function as a way for brands to communicate directly with consumers. But to date, the sustainability and climate concerns brands are increasingly eager to talk about when discussing long-term targets and goals, rarely feature during fashion week.

And yet, from a sustainability standpoint, fashion week shows and events themselves represent relatively low-hanging fruit. And while the impact is smaller than manufacturing, even for a small show the amount of waste generated can be staggering.

Up-and-coming fashion hub Copenhagen is already grappling with the challenge. Among other things, the organisation has banned single-use plastic bottles at fashion week events and started to offset the emissions generated by the international guests it hosts, as well as the catering, logistics, branding and manufacturing associated with the parts of the event it organises directly. Later this year, it will lay out a three-year plan introducing minimum sustainability standards for brands that want to show in Denmark. It’s a delicate balance.

With awareness of the issues only growing, brands big and small are increasingly taking independent steps to manage their shows more responsibly. One small, but significant, sign of change is that few now send out paper invitations, an expensive and wasteful hangover from a time before the internet.

LVMH’s show guidelines include directions to avoid air transport for goods and equipment, and a requirement to use energy-efficient LED lighting. They prioritise recycled materials for decoration and stipulate their end life should be considered in the design phase to ensure they can be reused or recycled again. The appendix includes a list of seasonal fruit and vegetables for catering purposes.

The guidelines aren’t compulsory, but there are prominent examples of them being put into practise. For instance, Louis Vuitton’s latest menswear collection was shown in Place Dauphine, with the set a pastiche of café life. The company said the whole thing was “almost zero waste.” All of the set elements, including a bright orange LV-branded bouncy castle that was sold on to a client, were re-purposed for use elsewhere. Many were items found on-location anyway. 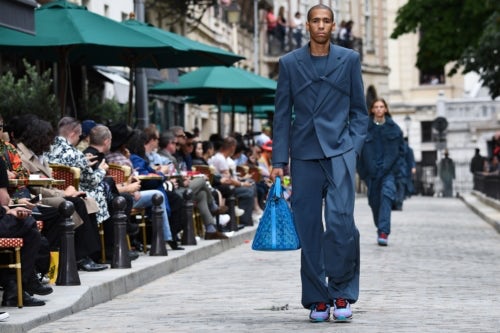 A model walks during a Louis Vuitton show in Paris in June | Source: Getty Images

There are also easy, but surprising, wins. When Copenhagen Fashion Week measured its own impact, it discovered that the second most carbon-intensive aspect of its operations after international flights was the 100 T-shirts it makes up every season for staff to wear. Going forward, it plans to make T-shirts without branding that could date them so they can be taken back and re-used each season. “It’s eye-opening,” said Thorsmark. “It proved how heavy the impact of the fashion industry is.”

Norwegian brand Holzweiler, which shows in Copenhagen, repurposed the marquee it used as a venue last summer into tote bags. This August, it used energy-efficient lighting to create a sense of space and atmosphere, rather than building a set. It also provided all backstage crew and models with steel water bottles and bamboo coffee cups when they first arrived. The waste generated by the entire show was just 1 metre of gaffer tape, said creative director Susanne Holzweiler.

But change is slow and spotty. Brands and production companies still often prefer to build things from new because it’s seen as cheaper and easier. The challenge for fashion weeks in an era of heightened environmental awareness is whether this attitude of business as usual is sustainable.

“I would stop looking at fashion weeks as an instrument for excess,” said Fashion Revolution’s de Castro. “Everything needs to be questioned right now because this system that we’re in has proved to be toxic.”

Here's What it Takes to Get Buzz at Fashion Week