The Case for Global Fashion Cooperation

In today’s complex and connected world, the major challenges facing fashion can only be addressed through greater global cooperation.

The Case for Global Fashion Cooperation

In today’s complex and connected world, the major challenges facing fashion can only be addressed through greater global cooperation.

Last weekend at VOICES, BoF’s annual gathering for big thinkers, the heads of the world’s four main fashion councils — the CFDA’s Steven Kolb, the BFC’s Caroline Rush, the Camera della Moda’s Carlo Capasa and the Fédération Française de la Couture’s Pascal Morand — took the stage together for the first time for an unprecedented conversation on rewiring the fashion system for today’s connected world.

For years, the relationships between these leaders seemed strained, leading to public spats, which played out in the media, and overlapping fashion week schedules. But with a newly found basis for collaboration and communication amongst the fashion councils, could we be entering a new age of global fashion coordination?

While the discussion at VOICES focused on the pros and cons of “fashion immediacy,” making clothes available at retail immediately after they have been presented at runway shows, the heads of the world’s four main fashion councils touched upon a wide range of topics, from sustainability and the lack of racial diversity to intellectual property protection and the consolidation of men’s and women’s shows, each with its own complexities.

Indeed, it became clear over the course of VOICES that solving any of the big and complex problems facing today’s fashion industry will require greater global cooperation — and that the four main fashion councils, who can help to marshal and educate their members, put in place global standards and co-ordinate and connect with other industries and government bodies, could play a major role if they were able to better coordinate their initiatives.

This is true whether the issue is sustainability, a key focus for Capasa; the often abusive and under-regulated modelling industry, a critical concern for the CFDA; or what to do about the fashion calendar, something that each of the councils is grappling with.

Burberry rejects Coach takeover. British luxury goods maker Burberry was reported to have turned down a number of takeover approaches from American “approachable luxury” brand Coach. Talks between the two companies, which could have created a firm with a market value of over $20 billion, are believed to have occurred over the summer. But Burberry is said to have firmly rejected the approaches from Coach. The report comes at a time when Burberry has been hit by wider industry challenges including a slowdown in luxury demand from Asia.

L Catterton acquires Pinarello. L Catterton — a private equity partnership between LVMH, Groupe Arnault, and Catterton — has confirmed it has acquired a majority stake in Italian bicycle maker Pinarello for an undisclosed sum, adding to speculation that the luxury giant is eyeing the health and wellness sector. L Catterton is also reported to be in talks to acquire upmarket cycling apparel brand Rapha. Pinarello said it plans to use the investment to expand its global presence and will open new concept stores in key locations around the world. Fausto Pinarello, current CEO of the company, will remain in his role.

Richemont offers to scale back job cuts.  Swiss watchmaker Richemont has signalled its willingness to reduce its number of planned redundancies by 20 percent (from 170 from 210 jobs) according to a Swiss workers union. Yet the Unia labour union is still pushing for reduced working hours instead of outright job losses. Demand for luxury watches has fallen dramatically in recent years and, in October, Swiss watch exports saw their biggest monthly drop in 7 years, with falling demand in almost every major market. Richemont recently overhauled its senior management team naming a new executive to oversee its watchmaking and operations divisions and eliminating the position of CEO.

Mulberry reports losses despite revenue rise. British accessories brand Mulberry has reported a loss of £500,000 in the first half of its financial year, though sales rose on the back of strong demand for its new collection designed by new creative director Johnny Coca, the company said. Mulberry, which has struggled in recent years as it attempted to move its offering upmarket, saw a near 10 percent rise in first half revenues of £74.5 million, though the knock-on costs from increased product investment and currency headwinds on overseas subsidiaries weighed on profits. 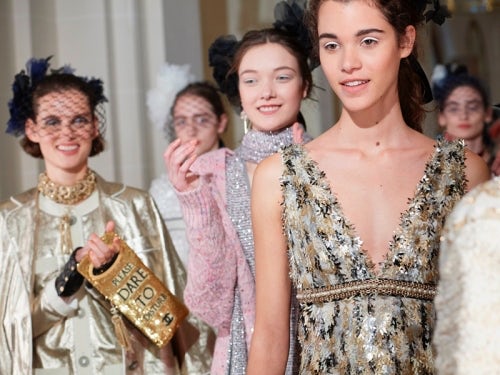 Chanel stages annual Métiers d’Art show. French luxury house held its annual Métiers d’Art show at the newly renovated Paris Ritz, showcasing the artistry of the traditional maisons that create the house’s embroidery, feather-work, buttons, beading and more. The Paris location was both a reflection of house’s historical connection to the city and a reaction to a broader sales dip caused by decreased tourism to the French capital after a string of terrorist attacks.

Shares jump on Lululemon quarterly sales rise. Shares in Lululemon rose 10 percent after the Canadian leisure apparel retailer reported a 7 percent rise in third quarter sales, —beating analyst expectations of 5.4 percent rise — helped by improvements to its supply chain and lower product costs. The company is in the midst of a five-year plan to double its revenue and its earnings, though it has struggled in recent years with product recalls and leadership changes.

Asos accused of unfair pay for new warehouse staff. The British online retailer is accused of breaching employment law designed to prevent exploitation of lower-paid temporary workers, according to a report, which showed that its new temporary warehouse workers have received lower wages than their colleagues. The news also comes as concerns mount over the welfare of Asos’s workers, an allegation it denies.

Arcadia CEO Philip Green delays company results. Philip Green, the head of British clothing giant chain Arcadia which runs brands like Topshop, has delayed the release of the company’s financial results, stating he was “not in the mood” to discuss the company or its earnings. The billionaire businessman has come under pressure from lawmakers to strip him of his knighthood after he sold the now-defunct BHS chain of stores to an unsuitable buyer, leaving a significant pension deficit behind. Arcadia will have to file its account by May 31.

Carolina Herrera receives Lincoln Center honour. Fashion designer Carolina Herrera has been honoured this year, with an award from New York’s Lincoln Center. The 77-year old, who was born in Venezuela, is celebrating the 35th anniversary of her eponymous fashion label which has become a global billion-dollar brand that is projected to generated $1.2 billion in retail sales this year.

Kate Hudson wants parent company to IPO. Actress turned entrepreneur Kate Hudson has said that she wants to see TechStyle Fashion Group, the umbrella company that oversees her women’s sportswear brand Fabletics, to complete an initial public offering. The company is expected to reach $650 million in sales this year according to its CEO Adam Goldenberg, with a longer-term aim of reaching an IPO, provided its investors approve.

Prosecutors aim to close Prada CEO tax case. Prosecutors in Milan are reported to have asked an Italian judge to drop a tax investigation involving Prada CEO Miuccia Prada and her husband and co-CEO Patrizio Bertelli. The investigation which began in 2014, does not involve the Italian fashion house and is part of a wider series of investigations involving high-profile Italian entrepreneurs, following the adoption of a more interventionist fiscal policy by Italian authorities.

Hearst combines editorial teams at multiple titles. Magazine publisher Hearst has announced that it will combine the beauty, fashion and entertainment departments at its print titles Cosmopolitan, Seventeen, Redbook, Woman's Day and Good Housekeeping. The changes will begin to take effect in January. The news comes as part of wider shifts in an industry which has seen legacy publishers implement a slew of cost cutting measures as they attempt to transform their organisations for the digital age.

Flipkart's Myntra bets on artificial intelligence. Online fashion retailer Myntra has said it plans to use artificial intelligence to improve its customer experience, as part of its plans to push further growth in its markets and turn profitable in its next fiscal year. The company which was acquired by India’s leading e-commerce group Flipkart two years ago, aims to double its annualised gross merchandise value to $2 billion by March 2018, from $1 billion.

Complex Media closes print magazine. Youth-oriented media brand Complex Media has announced it will close down its print magazine after 14 years. The title’s December/January issue will be its last. The company will lose a number of staff in its marketing and sales division, and some members of its editorial team. Complex, which was acquired by Hearst last year, plans to focus on its video offering.