Fashion week is splintering, unbundling and spreading out. A year ago, who would have expected Raf Simons to show in New York? Yet on Wednesday night the designer did just that, presenting his namesake collection for Autumn 2017 at art dealer Larry Gagosian’s outpost on New York’s West 21st street.

Just a few days earlier, Rodarte and Proenza Schouler both announced plans to move their main runway shows from New York to Paris, joining Vetements in its decision to show during the city’s Haute Couture week, starting next season. But these were just the latest in a string of similar moves. Today, a growing number of fashion brands, from Tom Ford and Tommy Hilfiger, to Rachel Comey and Rebecca Minkoff, are rethinking when and where they show their collections. So, why all the shifts?

For Simons, the decision to show in New York was likely more personal than strategic. As chief creative officer of Calvin Klein, the designer now calls the city home. But for Rodarte and Proenza Schouler, there are clear operational benefits to showing during Paris Couture Week. For one, showing in January and July allows them to align their main lines with the lucrative sales period for pre-collections, when buyers spend about 80 percent of their budgets. It also allows them to produce and deliver garments earlier, ensuring they stay on the sales floor for longer before discounting begins.

Yet for many other brands, the reasons for shifting the time and place of their shows are altogether different. Take the case of Tommy Hilfiger. Along with Rachel Comey and Rebecca Minkoff, the brand is staging its show in Los Angeles this season, before New York Fashion Week starts in earnest.

For Hilfiger, fashion week is primarily a consumer media and marketing platform, and as the traditional women’s “fashion month” becomes increasingly cluttered with competing messages, showing in LA allows the brand to stand out from the noise.

Of course, staging off-piste runway shows is nothing new. Tom Ford has been doing this for several seasons. And, for a time, major luxury brands seemed locked in a fashion arms race over which could stage the splashiest, most Instagram-friendly Cruise shows in locations far-flung from the world's main fashion capitals.

But now the approach is starting to chip away at the four traditional fashion weeks. In the age of social media and direct retail, brands like Hilfiger stage shows less for the cohort of traditional editors and wholesale buyers who were once the most important attendees at fashion week and more for the legion of celebrities, digital influencers and end consumers who spread their runway imagery online.

Indeed, like newspapers that found economic purpose by bundling together everything from politics to sports to fashion for an age of physical distribution, or department stores that acted as one-stop-shops for a time before e-commerce, the problem that fashion week was originally designed to solve — physically assembling industry professionals to show and see clothes — is no longer a problem.

This frees brands to court consumers — their ultimate audience — however, wherever and whenever is most advantageous. And while traditional fashion weeks are unlikely to disappear, their reason for being seems very much in flux. 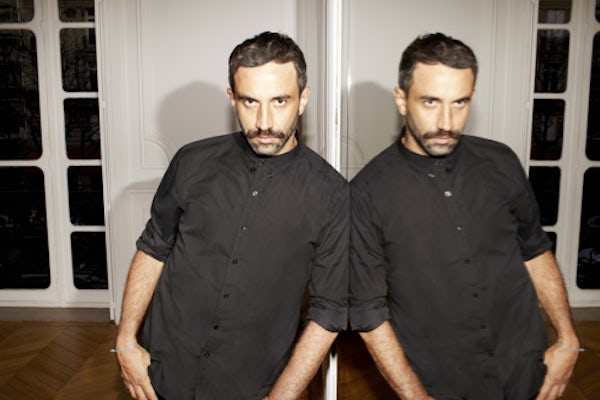 Riccardo Tisci leaves Givenchy. The designer is exiting the LVMH-owned fashion house after 12 years as creative director, as rumours intensify that he will join Versace. Tisci, who is credited with resurrecting Givenchy with his sensual and subversive collections, reportedly left the company on January 31 when his contract ended. Givenchy will not hold a runway show during Paris Fashion Week.

Ralph Lauren CEO exits as shares fall. President and chief executive Stefan Larsson is leaving following disagreements over the company's turnaround strategy. Ralph Lauren shares fell by more than 10 percent following the announcement and the brand's disappointing third quarter results. Larsson’s departure surprised some, coming just over a year after he joined the company, which is trying to inject more excitement into its product mix and move away from its reliance on wholesale and heavy discounting.

Clare Waight Keller to leave Chloé. The French fashion house confirmed that Clare Waight Keller will show her final collection for Chloé at Paris Fashion Week, before departing the brand on March 31. The move was a mutual decision between Chloé and the British designer, who recently moved her family from Paris to the UK. The Richemont-owned brand decline to comment on rumours that Waight Keller will be succeeded by Natacha Ramsay-Levi, a senior director at Louis Vuitton.

Four Richemont CEOs said to depart. The Swiss luxury group will name new chief executives for Dunhill, as well as three of its luxury watch brands — Vacheron Constantin, Jaeger-LeCoultre and Piaget — according to reports. Last November, following Richemont’s decision to eliminate the overall position of CEO, chairman Johann Rupert told investors the company would appoint younger executives who are more in tune with what today's luxury customers want.

Daniella Vitale named CEO of Barneys New York. As part of a long-expected succession plan, Vitale, formerly chief operating officer of the American department store, has been named chief executive, taking over from her mentor, Mark Lee, who is becoming executive chairman, reporting to Richard Perry, whose hedge fund Perry Capital owns a majority stake in the company.

LVMH announces joint venture with Marcolin. The French luxury group will set up a manufacturing and design partnership with Italian spectacles maker Marcolin, and take a 10-percent stake in the company. The deal, which follows rival Kering’s decision to bring eyewear in house in 2014, will tighten LVMH’s hold over its eyewear businesses, but will place pressure on Safilo, the world’s second-biggest eyewear maker, which currently holds LVMH licenses worth $366 million.

Retailers fight Trump tax proposal. LVMH, Walmart and Nike are among a group of more than 100 retailers and trade associations forming a coalition to campaign against the republicans’ proposed Border Adjusted Tax plan, which they argue could lead to a 20-percent price increase for everyday items include food and clothing. The plan would have widespread ramifications, as the majority of products sold in America are manufactured abroad.

H&M shares rise on store review. Shares of the Swedish apparel giant rose after it reported a growth in quarterly revenue and announced it would be reviewing its global store footprint. In recent years, H&M has introduced seven new brands to diversify away from the increasingly competitive budget sector, but low cost chain H&M still accounts for nine out of 10 stores. In contrast, Zara, rival Inditex’s biggest chain, makes up less than half of the Spanish company’s store count.

Disappointing Under Armour sales prompt scepticism. Under Armour reported fourth quarter revenue rose 12 percent to $1.31 billion, missing analysts’ estimates and prompting doubts that the sportswear brand can maintain its impressive growth rate. The company is working to establish itself as a lifestyle brand, launching a footwear partnership with basketball star Stephen Curry and debuting UAS, a new label designed by Tim Coppens, at New York Fashion Week in September.

New York Fashion Week: Men’s gets underway with Raf Simons’ show. The week began with Raf Simons’ first show in New York, an endorsement of the city that will help legitimise its entire menswear industry. Elsewhere, new chief brand officer Ingo Wilts made his debut at Boss, and against the backdrop of President Trump’s #Muslimban, Billy Reid offered audiences comfort with a show accompanied by artistic performances.

Snapchat files for $3 billion IPO. After months of speculation, the camera and messaging app has filed for an IPO and is seeking to raise up to $3 billion in what is expected to be the largest IPO since Alibaba Group went public in 2014. Snapchat, which has 158 million daily users, had revenue of $404.5 million in 2016, up from $58.7 million the year before. It has lost nearly $1 billion in the past two years.

Pinterest introduces search targeting to rival Google. Pinterest has launched a new search targeting tool that allows advertisers to use specific search terms to direct campaigns, in the same way as Google search ads. The announcement is part of the social media platform’s ongoing attempt to be seen by marketers as a search-based platform similar to Google or Facebook.