NEW YORK, United States — Laverne Cox does not want to get political. The actress had just twirled down — and up again — the runway at 11 Honoré’s first New York Fashion Week show in a billowy Zac Posen gown, size 10, to a raving audience. She shared the stage with nearly 40 models, donning labels such as Reem Acra and Marchesa, all in extended sizes, who together walked in the finale amid a shower of confetti. The audience cheered even louder.

Still, backstage, Cox expresses a frustration. “It blew my mind that no one has been designing for these women, taking them into consideration as beautiful as they are,” she says. “These brands are leaving money on the table by not acknowledging this market.”

To be sure, 11 Honoré’s show is hardly the first to feature curve models. During last September’s New York Fashion Week, there were over 70 appearances of plus-size models in shows by the likes of Mara Hoffman and Chromat. Meanwhile at Curvy Con, more than a thousand attendees gathered for shopping opportunities, panels and workshops on plus-size fashion.

But despite their presence on the runway and an undeniable market opportunity among consumers — nearly 70 percent of American women are size 14 or above — high fashion has remained stubbornly inaccessible to this demographic of consumers. With the exception of a handful of labels that offer extended sizing on their websites, it’s virtually impossible to find anything beyond a size 12 on the sales floors of Saks, Barneys or Neiman Marcus.

“It’s so foreign to me, this concept of, ‘oh, I don’t think you look good in my clothes,’” said designer Adam Lippes, whose dress was featured in the show. “That’s such a slippery slope. What if [designers] don’t like a certain race or religion in their clothes?”

But Lippes and Cox are hopeful that 11 Honoré is challenging the industry to put its money where its mouth is. The show Wednesday marked the first event of its kind during New York Fashion Week: one that exclusively features plus-size models in all-luxury designer apparel. It was also the first time a NYFW show has allowed attendees to shop a collection in real time by scanning the QR codes in the catalogue on their seats, which would then direct them to specific product pages for individual looks.

Putting on the show at the start of Fashion Week was a strategic move, according to Patrick Herning, founder of 11 Honoré.

We’re all about parity: creating the exact same experience for our customers that straight-sized women have.

“Honestly, one other really important point on why I was so maniacal on the [Wednesday evening] time slot this was meant to start a dialogue for brands to be representative for all women on the runway, and hopefully we’re starting a conversation that’ll last throughout this week,” he said.

“When we’re thinking about elevating the brand, we’re all about parity: creating the exact same experience for our customers that straight-sized women have… And what better way to have representation than fashion week?”

Herning and co-founder Kathryn Retzer (who has since left the company) launched the multi-brand online retailer in the fall of 2017 with partnerships with a dozen designers, including Prabal Gurung, Monique Lhuillier, Brandon Maxwell, Christian Siriano and Michael Kors. The idea was to offer the same clothes that these labels show every season at the same prices, but in sizes 10 to 20.

In its first round of funding led by venture capital firm Forerunner Ventures, 11 Honoré raised $8 million. But by June this year, according to Herning, the company will begin raising for a Series B round, which it will use to expand its presence in the Middle East as well as continue to host pop-ups around the US, in cities like Los Angeles, Dallas, Houston, Chicago and Atlanta. 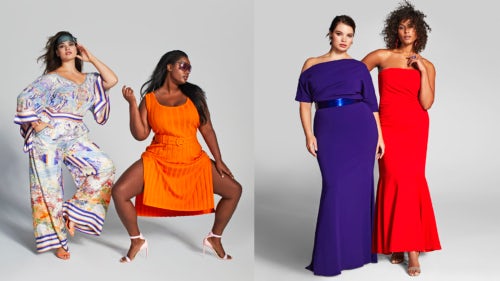 Today, 11 Honoré offers nearly 90 labels, the majority of which are exclusive arrangements, meaning that the retailer is the only one that offers its partner lines in plus sizes. The production of plus-sized clothes can be expensive for designers because it entails a separate pattern from straight-size garments. To incentivise its partners, 11 Honoré shoulders the cost of patternmaking and grading.

To catalise real change in the industry, it may come down to the retailers, Lippes said. “[They] have to be the ones to lead this charge, because designers may not be able to afford the patterns without a retailer to buy the sizing.”

On Wednesday, attendees included influencers in the plus-size space such as Nicolette Mason, Tess Holliday and Gabbi Gregg, as well as 11 Honoré’s customers, some of whom the company flew in. The showcased apparel also included designers such as Cushni, Christopher Kane, Altuzarra and Zero Maria Cornejo.

In 2016, US sales of women’s plus-size apparel grew twice as fast as overall US apparel sales, hitting $21.4 billion, according to market research firm NPD.

While designers have been more and more open to featuring plus-size models on the runway in recent years, few have offered consumers actual clothing in sizes larger than 12, thus creating a gap in the market for high-end plus-size apparel. In contrast, mass retailers like Target and Old Navy have embraced the plus-size market opportunity. Case in point is Walmart’s $100 million acquisition of Eloquii in October.

“Luxury and high-end designers have historically not been part of [this] conversation,” Mason said. “Part of that is the presumption that plus size women don’t want luxury fashion… But at the end of the day my personal belief is that everyone should have access to fashion at their personal price set — having the luxury of choice is the biggest luxury, whether that’s shopping at H&M or on high street.”

Through the scancode powered by Shopify, 11 Honoré hopes to capitalise on this market gap in real time Wednesday — though few attendees were observed actually using the function.

Still, the retailer and its champions proved their point. “In 2019, it’s very, very late to not be inclusive of everyone,” Cox said. “People are done with not being included.”