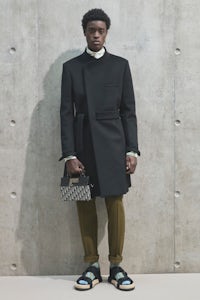 LONDON, United Kingdom — Kim Jones’s career has evolved at two of the biggest brands in the world, pillars of the global fashion machine, so it’s a real achievement that he’s been able to keep his work — first at Vuitton, now at Dior — as personal as it was when he launched his own label out of Saint Martins 17 years ago. His Spring 2021 collection for Dior Men was no exception. Consider it the latest chapter in his autobiography, this one delivered in a beautifully concise 31 looks.

Africa has always been Kim’s lodestone. His father was a hydro-geologist who travelled the globe for his work, and Jones lived the diversity of the continent as a child: Ethiopia, Kenya, Botswana and Ghana, his father’s favourite country. It has echoed through his adulthood. He’d been looking for an African artist to collaborate with when he re-encountered the work of Ghanaian portraitist Amoako Boafo at Art Basel in Miami last year. Jones made the pilgrimage to Boafo’s studio in Accra, and one of the first things he saw was a painting of a young man in a shirt with an ivy print. He instantly remembered an image from his research board in Paris, a woman in a Dior dress with a similar print. Call it Kismet. According to Jones, Boafo was already a massive Dior fan. He became the latest in the designer’s long and illustrious line of artistic collaborateurs.

The ivy shirt was a signal piece in the new Dior Men collection, the vines and leaves picked out in the kind of couture embroidery that Jones relishes. He challenged the Dior ateliers to reproduce Boafo’s signature finger-painting effect, an artisanal union made in art/fashion heaven. There were two pieces of embellished knitwear that reproduced Boafo’s portraits, worked leathers that abstracted his shapes, and other more subtle reflections of his textures and colour palette. And there was the attitude of the collection, the lean, elegant silhouette, the cummerbunded waistlines, the layering of toile de jouy and lace shirts, and then one explosive taffeta bubble. Male couture, in keeping with Jones’ grand design. “I had a very clear vision,” he explained. “I designed it almost per look rather than as separates. They’re distinct characters from Boafo’s work but each of them is infused with symbols of Dior.” And the shorts, the standout element? “They came from the idea that a lot of Amoako’s paintings crop off there.”

It would have been a dream to see this collaboration physically celebrated, but a pandemic nightmare intervened. Jones found a silver lining to the no-show cloud. He realized another dream, working with two of his heroes, filmmaker Chris Cunningham and photographer Jackie Nickerson, on short films to launch his new collection during the digital Paris Fashion Week. Cunningham earned his place in pop cultural history with videos for Björk, Madonna and the Aphex Twin (including “Windowlicker,” once seen, never forgotten. Kim got to try the disturbing masks chez Cunningham in LA). Nickerson’s opus major was “Farm,” her visual record of two and a half years spent photographing farm workers across Southern Africa.

With everyone in lockdown, the collaborations were completed remotely. Boafo filmed his family and friends wearing Dior in Accra, Cunningham edited the footage in LA and added a soundscape. “I wanted a film about Amoako so people would understand my love of his work,” said Jones, but Cunningham’s participation adds another visual and sonic layer, which reminded me a little of Mati Diop’s eerie, magical Cannes winner “Atlantics.” Nickerson’s film is a poetic interpretation of the collection, set to Max Richter music, but it allows a deep dive into the sumptuous textures, the decorative elements and techniques. Set together, the films complement each other, one real world, one dreamtime.

Given that it was created in such challenging times, Dior Men’s Spring collection feels controlled, serene. But it was emotional for Jones, coinciding with his father’s illness and eventual death. As soon as he can, he’ll take his dad “home” to Ghana. It will always be somewhere he escapes to. At his request, Dior will also ensure this particular collection leaves a lasting legacy by supporting Boafo’s newly created foundation for young artists in Accra.

The images in this review, courtesy of Dior, are not the full Dior Men's Spring/Summer 2021 collection.