TOKYO, Japan — In a world where retail-tech behemoths like to shout about their achievements, Rakuten has kept a low profile.

Since it was founded by Hiroshi Mikitani 22 years ago, the Japanese e-commerce and internet company has become a jack of all trades — offering the country’s largest online bank, most popular credit card, a wireless network and a streaming service — raking in a record 1.1 trillion yen (around $10.1 billion) in revenues last year. And though it serves over 1.3 billion global members, Rakuten is lesser known globally than other Asian juggernauts like Alibaba.

This could soon change. It was announced today that Rakuten is stepping up as Tokyo Fashion Week’s new title sponsor, following two three-year-long stints by Mercedes-Benz and Amazon respectively.

The deal, which could see the firm get more involved in the apparel and footwear industry, is expected to bolster Rakuten’s fashion credibility at home and abroad. Linking arms with Tokyo Fashion Week also suggests that the company may have greater international e-commerce ambitions. 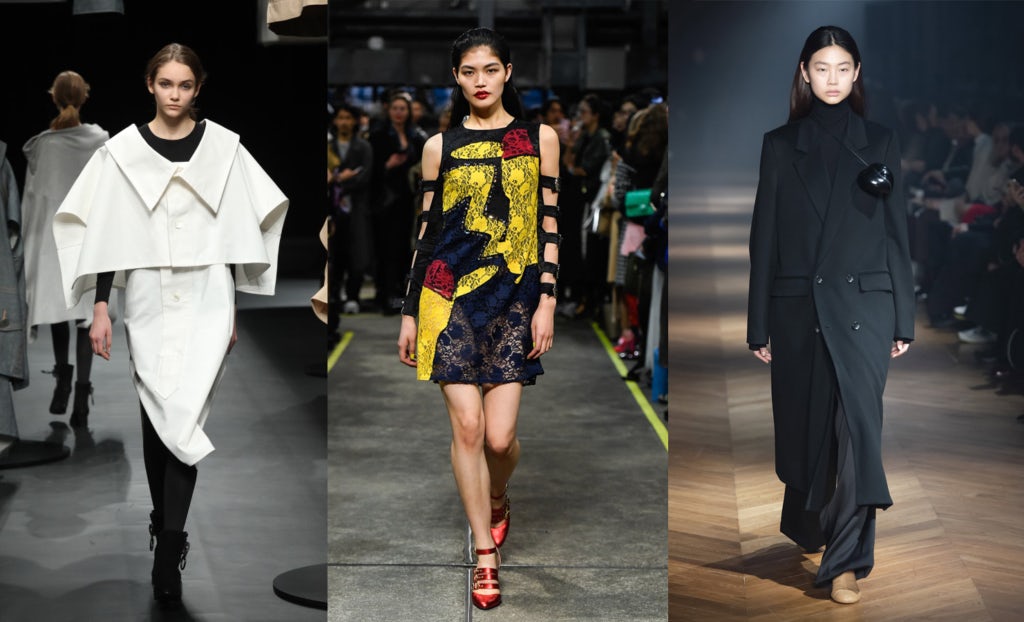 But beyond the cool factor of the catwalk and the valuable marketing association with a world-class event hosting designers like Koché, LVMH Prize finalist Anrealage and Beautiful People, questions remain about Rakuten’s end-game motivations. Is the tech giant making a serious play for a bigger slice of the Japanese fashion market?

According the group’s Chief Marketing Officer Naho Kono, the answer couldn’t be clearer. “To further expand our business and make Rakuten the No.1 fashion platform, we want to work more closely with not only the business of fashion, but the culture that nurtures fashion’s present and future,” she says.

To become the "number one fashion platform" in a market like Japan — which McKinsey & Co estimated is responsible for 3.6 trillion yen ($33.1 billion) annually on luxury goods alone — is nothing, if not ambitious.

Tokyo Fashion Week has risen to become the world’s fifth-most influential fashion week since its latest incarnation over a decade ago. While Amazon sponsored the event, it helped attract big names to the city through events such as At Tokyo — which invited the likes of Sacai, Undercover and Ambush to show and sell exclusive items online.

But as Amazon’s contract came to an end, there were calls for a more local focus, says Japan Fashion Week’s Organisation (JFWO) Director Kaoru Imajo, who helped broker the Rakuten deal with Tokyo Fashion Week mere months after being appointed to the role. JFWO declined to comment on the financial details of the partnership.

“We have been talking with Rakuten team for a while and everything [pointed to] the right timing,” says Imajo, who took over in April after the departure of outgoing JFWO director of international relations Akiko Shinoda. “Many insiders told us they wanted a Japanese company to be our title [sponsor,] so I’m glad that it’s happening.”

The freshly inked deal aims to tap into Rakuten’s diverse resources to raise awareness for the event among Japan’s general population and draw strong local and global talents to its runways.

Rakuten has a good reputation, but people associate it with travel, electronics, internet banking and mobile services, not immediately with fashion.

The partnership also feeds into Rakuten’s plans to cement itself as Japan’s go-to destination for e-commerce. At present, its mainstays include B2B2C marketplace Ichiba and Rakuten Brand Avenue, a separate portal stocking over 1,100 brands from Under Armour to local stalwart United Arrows.

As it steps further into the fashion space, Rakuten is set to face competition from the likes of  Zozotown and smaller, niche domestic fashion etailers. “Zozotown is a platform especially made for fashion, so it’s a no-brainer when people are searching for brands,” adds Indra Jainandunsing, a Tokyo-based fashion luxury and retail recruiter at Optia Partners.

According to Gartner data, luxury beauty players are more proactive on Rakuten, which distributes 27 percent of index beauty brands. However, only 14 percent of index fashion brands can say the same, despite the firm’s efforts in launching Rakuten Brand Avenue. In comparison, 55 percent of index luxury brands officially distributed via Zozotown as of September 2018.

“Rakuten has a good reputation, but people associate it with travel, electronics, internet banking and mobile services, not immediately with fashion,” says Jainandunsing. Though Rakuten remains tight-lipped on how exactly the event will tie in with its e-commerce offerings, Tokyo Fashion Week — with its array of buzzy brands — could help drive the firm in that direction.

Though Rakuten’s global merchandise sales in Japan reached a whopping 3.4 trillion yen ($31.2 billion) during its last fiscal year, it has yet to stock emerging designers or fully tap into Japan’s lucrative luxury goods market.

This is because grey-market issues are hindering Rakuten from forging stronger ties with luxury brands, claims Yo Douglas, Gartner’s senior specialist for research and advisory in the APAC region. Japanese consumers also haven’t embraced luxury e-commerce — in 2017, McKinsey & Co. pegged the country’s digital penetration for luxury goods at a mere 7 percent. 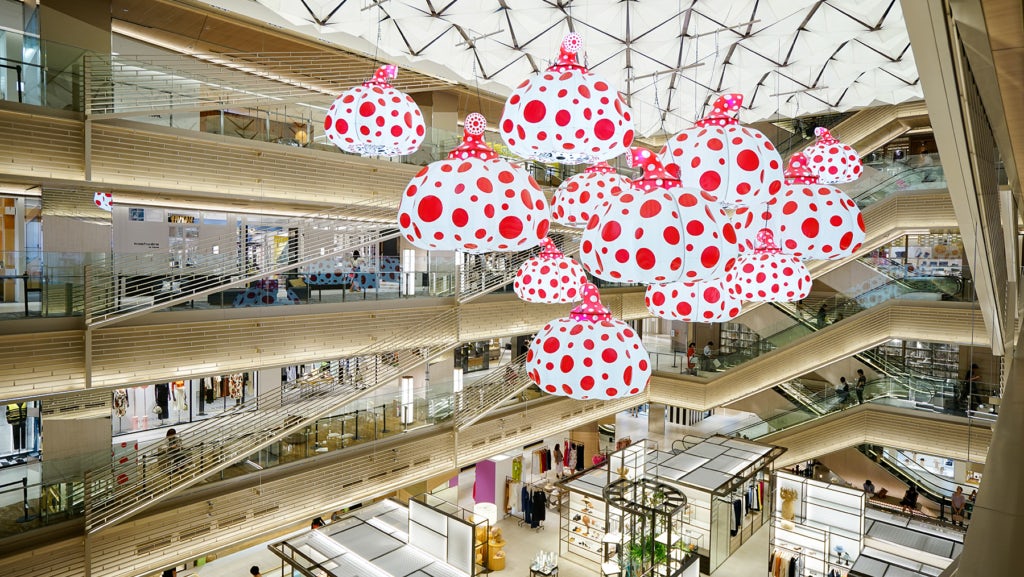 Inside the Ginza Six department store in Tokyo | Source: Shutterstock

“Japanese consumers with disposable income are older in comparison with other major markets like the US or China,” says Douglas. “This characteristic makes the local e-commerce landscape less sophisticated because they prefer face-to-face customer service, especially when they shop luxury goods.”

“A Japanese woman would rather say she bought a Saint Laurent bag in Ginza [neighbourhood] than on Rakuten,” echoes Jainandunsing. Even so, Japan’s lucrative luxury market is an opportunity that luxury retailers can’t ignore.

Looking to competitors is a good place to start. Rakuten could go down the same route as Alibaba-owned Tmall in China, and partner up with the likes of Yoox Net-a-Porter Group and luxury brands themselves to help establish their digital storefronts in Japan by launching a separate platform. “[Though] it might need to acquire a completely new brand of e-commerce portal like Amazon-owned Shopbop,” says Douglas.

The Giant in the Room

Rakuten’s ongoing battle with Amazon is heating up as the latter aggressively expands in its third-largest market after the US and Germany — to the extent that has warranted investigations by local fair trade regulators for suspected anti-trust violations.

Japan’s delivery network presents a major challenge for e-tailers. While Amazon’s upper hand in logistics allows it to undercut rivals, Rakuten is playing catch-up with its optional “One Delivery” initiative.

However, what Rakuten lacks in a global logistics network it makes up for in brand loyalty, cultivated through a points-based programme that links its 70 services from banking to e-commerce. “Rakuten’s ecosystem is what sets us apart,” says Naho. “By linking these many diverse services through a common membership and loyalty programme, we have created a unique Rakuten ecosystem.”

By linking these many diverse services through a common membership and loyalty programme, we have created a unique Rakuten ecosystem.

The firm has another ace up its sleeve: a mobile network that will launch later this year. The move will pit the company against established networks NTT Docomo, AU and SoftBank, but could bolster e-commerce and edge out Amazon, which lacks its local touch and ubiquity.

“This new network by Rakuten... can expand our ecosystem and provide useful services through an indispensable infrastructure for our members worldwide,” Naho tells BoF.

Indeed, one of the biggest questions facing Rakuten has nothing to do with Japan, but rather its global ambitions. After kicking off expansion in 2005 through a series of joint ventures and acquisitions — as well as investments in Lyft, Carousell and Pinterest — the firm shut down a host of its global marketplaces in 2016, and it has yet to fully gain a foothold in the US.

With all eyes on how Rakuten moves ahead with its global ambitions, the firm’s Tokyo Fashion Week sponsorship is a turning point. “Tokyo Fashion Week enables us to empower the designers and brands born in Japan to flourish in the global market,” says Naho.

Whether Rakuten will go on to do the same remains to be seen.

Zozo Embarks on Hiring Spree to Shore up Online Mall