The runways are awash with gender-neutral statements. What does this mean for retail?

LONDON, United Kingdom — Alessandro Michele’s womenswear debut for Gucci was, by far, the most anticipated show of Milan Fashion Week. How would Michele attempt to re-reinvigorate Kering’s ailing cash cow, after chief executive François-Henri Pinault said in December that the brand needed a fresh point of view and more daring shows?

The answer: bookish, pussy-bow wearing boys and girls, sharing both the runway and the same tailoring, shoulder-length locks and cut-glass cheekbones. Indeed, the show eradicated the last vestiges of Gucci’s hyper-sexualized Tom Ford era, which had, at times, chimed within Frida Giannini’s vision for the brand. Instead, Michele’s outing was a celebration of an aesthetic that transcended gender differences.

Michele is not alone in his exploration of what it means to clothe both sexes in a time when gender stereotypes read as traditional, even archaic. Prada, Givenchy and Saint Laurent have all featured both men and women in their shows, the models and the clothing so similar that ‘guess the gender’ is fast becoming a favourite fashion week pursuit.

But will genderless work at retail? Are end consumers really ready to retire the gender codes that have dominated the way we dress for centuries and shop alongside each other?

Perhaps not. But there is evidence that change is afoot.

“We get men buying into women’s brands such as Céline and we have women buying into the Givenchy men’s collection as it has a bigger sweatshirt/tee offer which appeals,” noted Lianna Mann, vice president of womenswear, home and jewellery at Lane Crawford.

“For decades, we've carried interesting clothes. Today, we look to Shayne Oliver's Hood By Air and JW Anderson. Ultimately, it is more about beautiful clothes that are rare and special; it is more of a sidebar note that these clothes are stylistically less rigid than what we perceive to conform to a definition of masculine versus feminine,” added Tom Kalenderian, executive vice president and general merchandise manager for menswear at Barneys New York. “Certainly, it’s not everyone, but someone we all know.”

According to a recent report by Trendwatching.com, “People of all ages in all markets are constructing their own identities more freely than ever. As a result, consumption patterns are no longer defined by ‘traditional’ demographic segments such as age, gender, location, income, family status and more.”

“Probably around 30 percent of the total menswear buy is genderless. JW Anderson, Rick Owens, Saint Laurent... It has already changed the way we style products,” said Monica Pascarella, chief menswear buyer at Luisa Via Roma. “It definitely changes the concept of ‘department’ stores. For us, as a concept store, it has less impact, but I think it will be more noticeable as we move forward.”

In March, British department store Selfridges is launching Agender, an experiential, gender-neutral pop-up that will span three floors of its Oxford Street flagship and have a presence in its stores in Birmingham and Manchester. “It is something that we have definitely seen coming for a while. It is no secret. It is out there and it is quite zeitgeist-y,” said Linda Hewson, creative director of Selfridges.

While the gender-bending runway styles that have grabbed the most headlines generally focus on menswear collections importing feminine styles — be it tennis dresses at Raf Simons or suede skirts at JW Anderson — data collected by Selfridges showed that, when it comes to shopping collections designed for the opposite sex, women are leading the way. “What we have noticed from a retail perspective is a lot of women are shopping on the men’s floors,” said Hewson.

Agender will include product from a wide cross-section of the store’s buy. “The traditional department store model is very much about categories, men’s floors and women’s floors. We wanted to carve out space throughout them. It is from streetwear right through to avant-garde like Haider [Ackermann] and Yohji [Yamamoto] as well as unisex haute couture from Rad Hourani and Nicopanda by Nicola Formichetti, so what is interesting is the crossing over throughout very different price points and categories,” she continued.

Doing away with gender altogether is not without significant challenges, however. “Obviously, sizing doesn’t cross over always, and it is one of the things that we have had to talk about a lot. How do we make it really simple for our customers? How do we communicate that a men’s medium might be a size 12 or 14?” 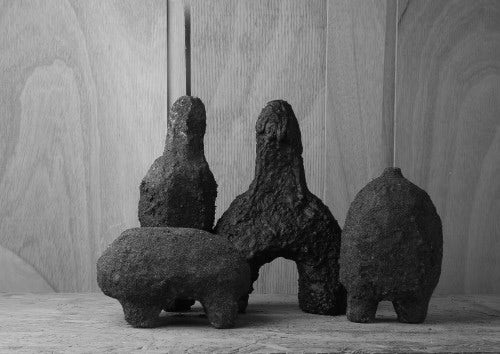 One of the biggest challenges Selfridges faced was reimagining the store environment. Freeing a department store of the visual cues that guide customers to where they should shop was a big undertaking, for which the retailer called on Faye Toogood, an interior designer who has worked with Hermès, Comme Des Garçons, Kenzo and Alexander McQueen. “I want people to walk into a very neutral space. I am making a series of sculptures that are my take on a mannequin, but they are genderless in form. I managed to convince Selfridges that by bagging all of their product in white canvas, I am removing all visual merchandising, branding and any sense of demographic in terms of gender,” said Toogood.

“This is really a practical experiment for us, for a new retail environment and experience,” added Hewson. “It could be a retail space in itself in the future. Or is it about making the existing space more open to that? For the first time, the buyers have mixed price points and genders in their buy, so it will be very interesting to see how they take that approach forward when they buy their collections [for the rest of the store]. We have always had these limitations. Maybe that should become much more fluid. Maybe we will start to create departments that are much more about identity and personality.”

“It’s the future. The lines will continue to blur and there will continue to be less difference between collections,” said Luisa Via Roma’s Pascarella. “Even men and women’s physical appearances are becoming more similar: super thin physiques, thicker, equally groomed eyebrows, barely there makeup for both — the list goes on.”

“Retailers will need to change with the consumer, as they have already done outside of fashion,” observed Marshal Cohen, chief industry analyst at market research firm NPD, pointing to the way young people shop for tech accessories and activewear. “Kids and young adults today shop together no matter the gender. This clearly plays into fashion."

But the days of major retailers going genderless, beyond a short-lived pop-up, are still a long way off. “It’s not really significant for Lane Crawford,” said Mann. “It is not really on our radar,” added a spokesperson for US giant Neiman Marcus.