The Los Angeles-based denim brand wants apparel to account for 30 percent of its total revenue by 2021.

LOS ANGELES, United States — Premium denim made 7 For All Mankind famous, but the American brand is banking on ready-to-wear as an avenue for growth.

The jeans maker, which sparked a boom with denim priced over $200 and were worn by celebrities from Sarah Jessica Parker and Heidi Klum, is collaborating with London-based fashion label Marques’ Almeida. The 19-piece capsule collection will launch mid-November and include T-shirts, flared trousers and denim jackets. With prices ranging from £80 to £1,450 (about $104 to $1,886), it will be sold at selected retailers, including Selfridges in London and Net-a-Porter.

The partnership follows a trend where denim brands, such as Acne Studios, Rag & Bone and Frame, are increasingly expanding into ready-to-wear as a plethora of newer and edgier labels flood the market, and demand for premium denim has slowed. While the global premium denim market is projected to hit $21.4 billion by the end of 2018, according to research firm Euromonitor, brands are increasingly weary of remaining in a single category as the market becomes more saturated. 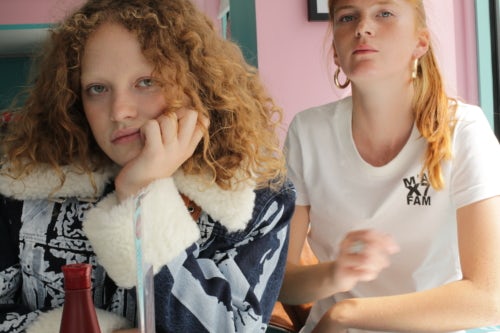 “We know how important ready-to-wear is, so in the next three years our goal is to have ready-to-wear become 30 percent of our business,” said 7 For All Mankind’s chief marketing officer Jenna Habayeb, adding that “ it is an aggressive goal to achieve.”

Founded in California in 2000, 7 For All Mankind was one of the first labels to establish itself in the luxury denim market. It was acquired by VF Corporation, which owns more than 30 brands, including Vans, The North Face and Timberland, for $775 million in 2007 during the heart of the premium denim boom. But the brand has faced waning sales in recent years, amid the rise of the ‘athleisure’ trend where consumers are swapping jeans for yoga pants. (In 2016, VF Corp spun off 7 For All Mankind to Delta Galil, an Israeli apparel manufacturer.)

But things may be looking up for the brand as denim has started to enjoy a rebound. Following three years of declines, the global jeans market is expected to grow this year: Euromonitor forecasts that the men's and women's categories will rise by 4.2 percent and 3.7 percent this year, respectively. According to 7 For All Mankind, the company has already seen six quarters of profitable growth.

The collaboration comes ahead of Marques’ Almeida’s move to Paris Fashion Week in September. Launched in 2011 by London-based designers Marta Marques and Paulo Almeida, and propelled by the success of its signature frayed denim pieces, the label won the LVMH Young Fashion Designer Prize in 2015.