It's been a tough few weeks for retailers, yet Amazon's shares are up over two percent.

SEATTLE, United States — It's been a tough few weeks for retailers, and today is no different. But there is one exception: Amazon.com Inc. Whereas XRT, the SPDR S&P Retail ETF is down over 4 percent, as of 2:30 PM e.t., Amazon shares are up over 4 percent.

One driver of the retail selloff is Macy's Inc., whose earnings report sent shares tumbling this morning after the retailer cut profit forecasts and missed analyst estimates on revenue. That's the opposite of what happened to Amazon last week when the web giant blew past analyst estimates. Given this recent action in the retail space, analysts at Cowen and Company are reiterating their call for Amazon to displace Macy's as the number one US apparel retailer by next year.

The team previously made this call in July of 2015, saying they were confident that Macy's would lose its top spot within two years.

Looking at revenue from electronics and general merchandise at Amazon, the trend is obvious. Amazon has seen continued growth in its retail business with the expansion of its Prime offerings. 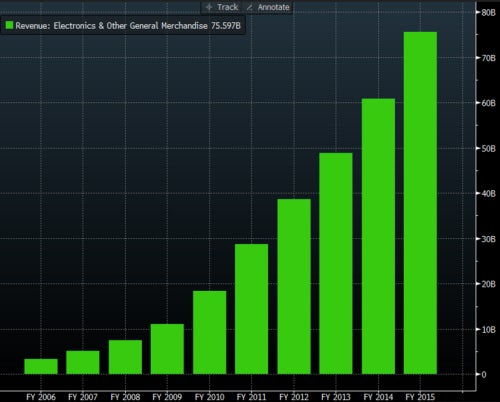 Macy's, on the other hand, has been a bit more sporadic. There was a big drop off following the recession before sales bounced back, but a more recent drop causes some concern. 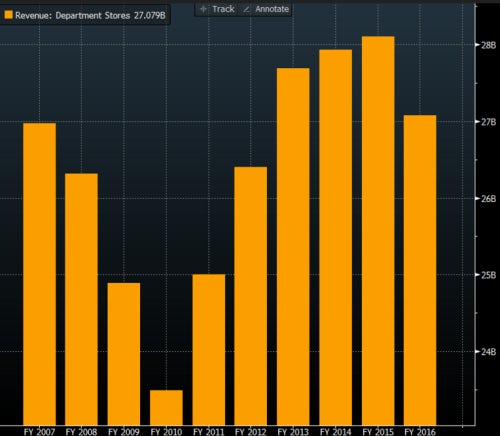 Their stock prices have certainly reflected these trends. Amazon is up 65 percent over the past year, whiles Macy's is down more than 50 percent.

Of course,  Macy's recognises that more sales are moving online and that the department store model may need some changes."[W]e are absolutely not pulling back our commitment to digital and omnichannel retailing," Karen Hoguet, Macy's chief financial officer said on today's earnings call. "Mobile remains a very high priority and we to invest. You may have seen that a leading trade publication last month ranked Macy's Inc., as the sixth-largest online retailer in America, and as I said earlier, we are continuing to see double-digit year-over-year sales increases in online sales."