MILAN, Italy — The elusive Giambattista Valli is not easy to catch. He is too busy single-handedly running his independent maison, and coming up with a different collection every month of the year: two for couture, four for Giambattista Valli ready to wear, four for his year-old line Giamba and two for Moncler Gamme Rouge where he serves as creative director. Valli is an authentic, restless workaholic with the agenda of a designer who wants to stay at the top of the game while playing it to his own rules — i.e. financing his own work with other work, no investor needed. Valli makes every possible effort in order to be his own boss, "I could not do otherwise, at least for the moment," he concedes.

Throughout our encounters, he is dressed in mandatory, black Comme des Garçons pseudo-basics, his trademark string of pearls strung around his neck, serving as a lucky charm. Extremely protective of his private life, Valli does not disclose details about family, upbringing and other personal ephemera, keeping the storytelling strictly professional, which, in this Instagram age of uttermost exposition, sounds soothing as well as slightly frustrating. 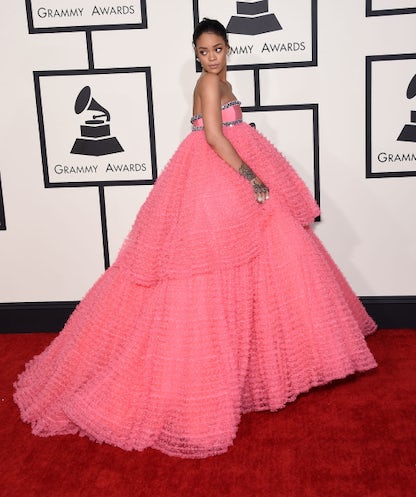 Valli hails from Rome, the once glorious couture capital of Italy, which is currently witnessing a sort of renaissance. You can still tell, faintly, from his accent. Geography notwithstanding, Italy forged the designer's aesthetic, though today he is an adoptive Parisian "I proudly claim my Italian, or even better Roman origins — he states — It is in Italy that I produce my collections, and it is in this beautiful country that I keep my roots. Professionally, however, I chose Paris: here fashion is supported by an authentic cultural system, and making clothes is considered as an art."

Of his initiation to fashion, he recounts, "I attended grammar school but always had a passion for drawing. After graduation I enrolled at Rome's Istituto Europeo di Design, while attending a fashion foundation course at London's Central Saint Martins. Once I got my degree, in 1987, Roberto Capucci took me on as his assistant."

Working at the side of such an undisputed, revered master like Capucci, more a sculptor working with fabric than a mere dressmaker, and a wonderfully painterly colorist to boot, left an indelible imprinting on Giambattista Valli, whose main interest lies in the unremitting perfection of the line — rather than in the distracting layering of decoration. It is an architectural trait he openly shares with his maestro. "Pivotal experiences return and recur in your work. For me fashion is about a sign, a line, a texture, just like Roberto Capucci taught me. I believe in a certain creative strictness, and aim at creating a distinctive silhouette. Silhouettes, in fact, are memorably piercing. Decoration, instead, is just a souvenir that fades away quickly.” Alongside Capucci, Valli became a master of construction, learning first and foremost how to respect women without sacrificing invention. However, even at his most experimental, Valli keeps things wearable and relatively easy. "I design for a living body, not for a lifeless mannequin," he explains. 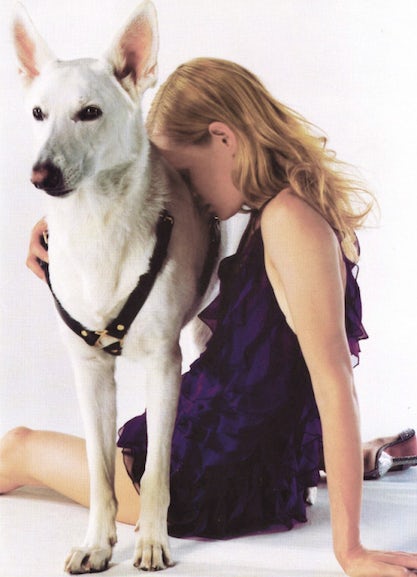 Rome’s famous Fendi sisters came to know about Valli's talent while he was still at Capucci. The sisters steadily lured Valli in-house for Fendi, to work on the then newly-launched Fendissime line, a high-impact collection targeted to a younger audience which made waves in Italy in the late Eighties/early Nineties. Valli headed up the line for five years, before moving to Milano to join Krizia in 1995, and finally landing in Paris in 1997 — securing a sought-after place at Emanuel Ungaro. Valli began his tenure at Ungaro under the wing of the revered couturier himself, but from 2001 onwards had complete autonomy at the company as its creative director.

Valli has fond memories of his time at Ungaro, recalling the rush of controversy some of his moves created, to the point of almost being kicked out of the job. "Monsieur Ungaro gave me complete trust and absolute creative freedom, which led me very far. A Mario Sorrenti campaign starring Kirsten Owen and a German shepherd was deemed outré, while a series of couture images shot by Corinne Day came across as too punk and decadent. But it was fun". As risky as it got, Valli's contribution made the Ungaro house dramatically relevant in a particularly bubbly and effervescent fashion moment — the eclectic early Noughties — further putting him under the spotlight as a hot one to watch.

Sensing that being in the spotlight was the right time to test new ground, in 2005 Valli went solo, opening the Giambattista Valli maison in Paris — using his own money with no external investor. The independent Valli counted instead on the infrastructure of producers he had built up over the years. He is one of the very few in his generation to have struck out on his own, and certainly the only one amongst his old Italian colleagues at Fendi: Frida Giannini, Maria Grazia Chiuri and Pierpaolo Piccioli, to name a few, all kept working as creative directors. A somehow safer position, if also a fickler one.

"I believe that the sense of daring lasts just for a short while: if you cross the gap at the right time, you keep it open for life, otherwise it closes behind you and you become fearful. I launched my brand at the perfect moment: there was a waltz of farewells and new departures going on, igniting a generational turnover. The looming of a major crisis would open glimmers of novelty, too. Being my own boss is a risk and a commitment, but it has a great advantage: I’m the only one who decides." 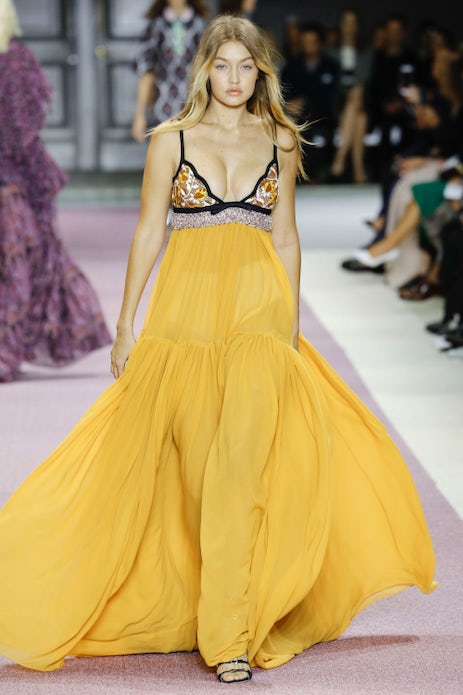 The Giambattista Valli line, all womanly shapes and occasion dressing, was well received by both buyers and clients who were willing to pay between €500 and €3000 for a piece. "Women responded right away to my work. I think it is because I sensed a gap in the market and I filled it. This feedback has kept me going throughout the years. I am here thanks to women because I'm just a fournisseur, a provider, of some special moments. Clothes, I think, are fifty percent of the work, the rest being the interpretation of the wearer,” he explains. Valli counted right away on a very selected, highly snobbish coterie of ambassadors: his friends Bianca Brandolini D'Adda, Eugenie Niarchos and so on were soon to be known as Valli girls, while Lee Radziwill offered another stamp of approval, immediately cementing Valli's social status as a sidekick to the lucky few, creating an aspirational aura around the brand.

“I do not want to categorise my woman: I think she is more a mental disposition than a body shape. She is free and plays with fashion while keeping her distinctive personality. She is body-conscious and lives in harmony with herself. She is demanding and potentially always has a man at her side. As for my style, I would define it with three subtractions: it is timeless, because it is suspended between past and present; it is ageless, because it is a philosophy that knows no boundaries; it is effortless, because it is fluid, spontaneous, free and totally unconscious,” continues Valli.

That may be his consistent frame, but the Valli lexicon has continually expanded finding different channels, and targeting different audiences. In 2011, the couture collection was launched, marking at once the fulfilment of a dream and the securing of an even more well-to-do clientele. It also prompted a further leap forward in his ready-to-wear, which got sharper and more modern. "With couture, I finally have a playground for my grand ideas, which means I toned down the prêt-à-porter," Valli says. Detractors who deemed Giambattista Valli too ladylike were silenced. Further expanding his reach, in 2014 Valli introduced Giamba — a younger, more irreverent but still very precious collection — named after his own familiar nickname and aimed at a riskier, easy going audience. "Giamba is not a second line, nor I ever intended it as such. It is the expression of another side of my personality, because I have many. The collection is thought for the same woman I usually speak to. I just imagine her in after-hour mode. This is something I always wanted to do, and now I have found time to."

With its mix of romanticism and S&M, couture finesse and street savvy, Giamba, which is presented in Milano, hit a nerve, proving another commercial success. Yet, despite the palpable growth, Valli keeps a hands-on approach: his design team is painfully small, and he rarely delegates, even though he likes to have different voices around. During our encounters, he was constantly giving directions to his staff, looking at once bossy and friendly. 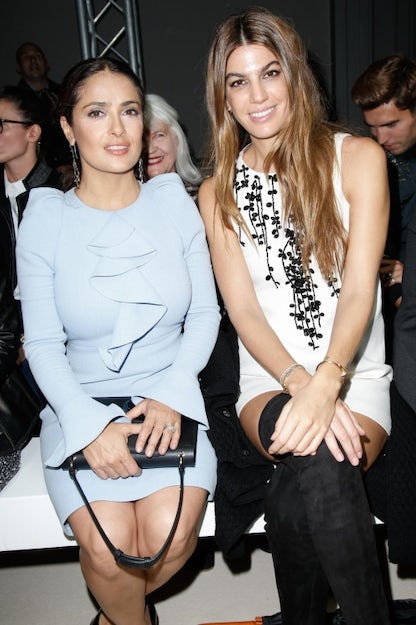 A key to the Valli success is the ability to merge an unremitting point of view with a free-wheeling zing of eclecticism. He claims inspirations as diverse as Mina, India, Antonio Lopez, Bianca Jagger, Jane Birkin, Louise Bourgeois, Francis Bacon, Nan Goldin, Federico Fellini, Andy Warhol and MTV. He has looked at Arte Povera, Eva Ionesco, lipstick lesbians and fairy tales as sources for recent collections, and likes to keep an element of tension to whatever he does, which is exactly what makes his work contemporary instead of referential. Geography, or rather genius loci, comes again as an explanation. "My house, in Rome, is in Via del Governo Vecchio, where you can find a very Roman melting pot — a crazy mix of individuals from all walks of life. Here everyone needs everyone, and maybe the best friend of the Marquis is a carpenter. With this sense of eclecticism, Rome has integrally shaped my views and personality."

Stubborn and focused: this is how Giambattista Valli comes across. Keeping his business independent means that, apart from his own line, he needs to do a lot of consultancy work, in order to get money to invest in the growth of his namesake mini-empire. There is Moncler Gamme Rouge and Max Mara Atelier, and much more that is not discussed. There have been successful co-brandings, too: with M.A.C on a hugely successful line of lipsticks and with 7 For All Mankind. This means long working hours and endless travelling — an entire life dedicated to work. It sounds hard on paper, but Valli would not have it in any other way. "I am passionate and I have fun: being independent gives me the chance to write my own story the way I want to write it, and that's priceless," he says. As for the overlapping of entrepreneur and couturier, he isn't worried either. After all, the business pressure is self-imposed, and there is no chief executive to report to but himself. Or, to put it in Valli's final words, "Figures and sales are great, but they are greater if you do them creatively."