Through a strategy of product iteration and timely category expansion, Lisa Marie Fernandez has built an influential swimwear brand, with sales set to double this year.

Through a strategy of product iteration and timely category expansion, Lisa Marie Fernandez has built an influential swimwear brand, with sales set to double this year.

NEW YORK, United States — Despite launching in the middle of the global recession, the growth of Lisa Marie Fernandez’s eponymous swimwear brand has been steady and impressive. The New York-based brand is stocked at 182 doors across the US, Europe, Asia and the Middle East, and for the last couple of years, its sales have doubled every year; a growth rate that Fernandez — the company’s founder, chief executive officer and designer — anticipates it will maintain for 2016.

The rise of Lisa Marie Fernandez has coincided with the evolution of the swimwear market which, driven by increasingly globe-trotting lifestyles and a year-round demand for beachwear, is predicted to reach $28.3 billion by 2020, up from $20.9 billion in 2014, according to Euromonitor. Fernandez’s editorial silhouettes have elevated bikinis and swimsuits above their functionality, to become fashion statements, tapping consumers looking for distinctive swimwear that will make a splash on social media.

Everyone knows the product. Girls know the names of the bathing suits they’re buying.

However, the summer of 2009 that Fernandez launched Lisa Marie Fernandez, “the market was really bland, there wasn’t anything happening,” she says. Few stores stocked swimwear outside the summer months, and consumer choice was dominated by “boring triangle bikinis” made out of Lycra, she recalls. 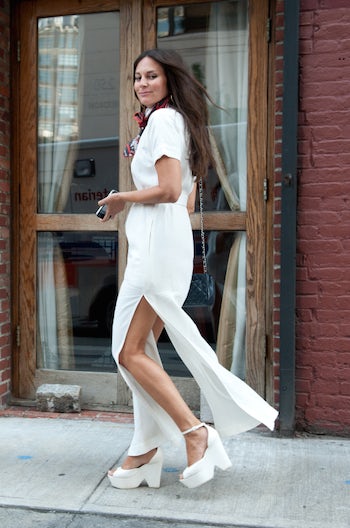 At the time, Fernandez was carving out a career as a freelance stylist and editor — contributing to publications including American Vogue and consulting for the likes of Francisco Costa — but her real passion had always been swimwear. Building up her own wardrobe (she estimates she owns over 300 bathing suits) and a first job as swimwear market editor at Elle magazine made Fernandez quick to identify a gap in the market — neoprene.

Seven years ago, '80s styling was having a resurgence, with brightly-coloured body-con dresses dominating the catwalks. However, nobody had brought back the era’s iconic neoprene scuba swimsuits, made famous by models like Elle Macpherson.

To Fernandez, neoprene — with its '80s aesthetic and practical, swimwear-friendly properties — was a missed opportunity. “It’s like Spanx for swimwear. It just sucks everything in and moulds to your body to make you look strong and powerful — even athletic when you’re not,” she says. She tracked down a supplier capable of producing the quality of neoprene needed for high-end swimwear, drew up seven neoprene bikini styles and — on a whim, and without a business plan — took them to Paris Fashion Week.

Years working with fashion magazines had given her an extensive network of industry contacts that she leveraged for her first presentation — where attendees included Net-a-Porter’s Natalie Massenet and Sarah Rutson, then-fashion director of Lane Crawford. The bikinis, which were each named after a woman Fernandez admired, and took fashion accents from the ready-to-wear market such as athletic silhouettes, chunky, exposed zippers and structured off-the-shoulder ruffles, were an aesthetic breath of fresh air that buyers were quick to respond to. Twelve stores — including Net-a-Porter, Bergdorf Goodman and Barneys — placed orders for the first collection.

The brand’s approach to product and retail expansion has been restrained. Fernandez compares her product growth to that of Apple’s iPhone — slowly introducing variations in colour and style, rather than creating completely new products each season. Five of Lisa Marie Fernandez’s original seven bikini styles are still in production, now in fabrics such as rubberised and pique neoprenes, terry cloth and waterproof denim.

Being in too many places at once and being over distributed is the kiss of death.

“If we give too much out right away to the marketplace, we’re going to dilute our own product. We had to start with an introduction and a focus,” Fernandez says. “It takes a moment for everyone to catch on to a brand. It doesn’t happen overnight.” 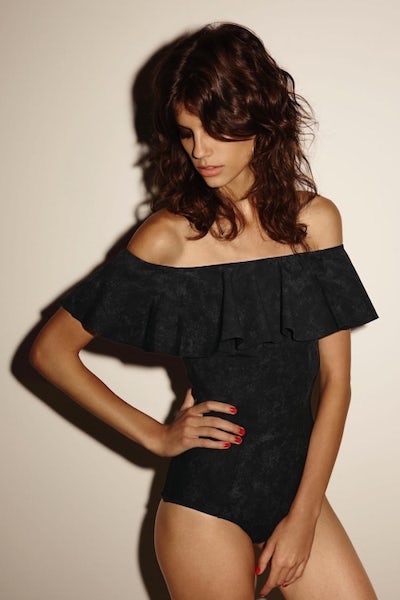 Iterating on key styles has helped the brand develop a high level of recognition amongst consumers. “Everyone knows the product. Girls know the names of the bathing suits they’re buying,” she continues.

The brand’s retail strategy has also been cautious, to avoid overexposure. “Being in too many places at once and being over distributed is the kiss of death,” Fernandez says. “It’s about being in the right stores, not tonnes of stores.” No two stockists have the same offering, and the brand creates exclusive, one-off colour and fabric combinations for specific retailers, to give the customer a different shopping experience each time she comes across the brand.

Customising its wholesale accounts in this way requires a flexible production network. Since launch, Lisa Marie Fernandez has had sole use of a New York factory, which produces all of its swim- and beachwear. Having exclusive control and close proximity to the factory means the brand can produce in small, frequent runs (sometimes as few as 14 units) and turn around repeat orders in a week, helping the label react to the unexpected popularity of certain styles, and avoid bulk orders that would flood the market and lead to mark-downs.

Fernandez has also tapped the Instagram generation through savvy category expansion. In Spring 2013, Fernandez launched “destination wear” with a collection of lightweight, relaxed shirt-dresses and skirts — distinguishable from the traditional ponchos and embellished kaftans — that can take fashion-conscious holidaymakers from the poolside to a smart restaurant, and are even stylish enough to wear in the city. Last year, destination wear accounted for just over 50 percent of Lisa Marie Fernandez’s total sales.

So far, Fernandez has focussed on wholesale retail as a way to achieve global distribution — something she felt was fundamental to the brand’s destination wear core. “I didn’t want someone to just buy our bikini online and take it to Istanbul and wear it by the pool…I want buying the bikini in the store [at your destination] to be part of the experience,” she explains. In 2015, wholesale made up 90 percent of the brand’s sales.

However, direct-to-consumer e-commerce will be a key point of growth. According to Fernandez, this could “easily” grow from 10 percent of sales to 50 percent. So far, the brand’s own e-commerce site (which it has had since launch) has taken a backseat, but will relaunch tomorrow, with a new site designed by Ezra Petronio, the art director behind digital projects for Chanel, Chloé and Saint Laurent. The platform will sell exclusive designs and capitalise on Fernandez’ magazine background with new editorial content.

Until now, Lisa Marie Fernandez has grown without external investment — its launch and first years were privately funded by Fernandez, before the company crossed into profitability in 2012. “We don’t have some investor telling us A, B and C and having big ideas for growth to be fast and furious to get quick returns,” she says.

But while Fernandez has used this independence to take a restrained approach to product evolution and retail growth, expanding the business into areas like brick and mortar retail will require investment. Currently, Fernandez has no definite plans to open a store, but “would love that to happen sooner rather than later,” she says.

How Triangl's Colour-Block Bikinis Took over the Beach