Floriana Gavriel and Rachel Mansur are expanding their cult label into men’s clothing and accessories.

NEW YORK, United States — Six years after launching an instantly popular line of minimal, sculptural handbags, co-founders Floriana Gavriel and Rachel Mansur are dipping a toe into the men’s market, starting with a collection of men’s accessories launching for Pre-Fall 2018.

“We’ve always envisioned a complete world, so men’s is something we always imagined and are only able to fully implement now,” said Mansur, noting that the collection has been in the works for about three seasons. “It was always at the back of our heads that we wanted to do it,” agreed Gavriel. 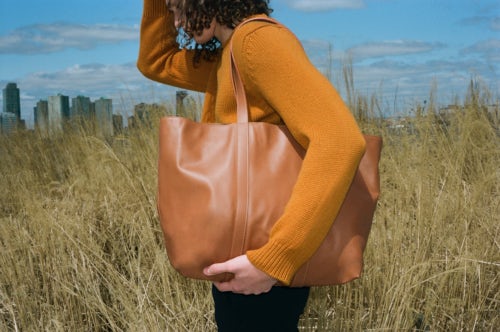 The first collection consists of 11 styles, including briefcases, backpacks, totes, wallets and cardholders — many of which resemble a masculine iteration of the styles that made the brand so popular among female consumers. “The leather goods are made in the Veneto region of Italy. They’re high-quality items with an accessible price point,” Gavriel said.

With prices ranging from $195 to $1,395, the initial collection will be sold at the brand’s New York and Los Angeles stores, as well on their e-commerce site and with exclusive partner Mr Porter. A second menswear capsule for Autumn/Winter 2018, which includes ready-to-wear and footwear, will follow in September.

"It's a brand we have watched grow over the past few years in the womenswear market, developing a strong customer following," said Simon Spiteri, accessories buyer at Mr Porter. "Its simple yet strong brand DNA will complement our existing accessories brand mix onsite. These are great everyday accessories for our customers, who appreciate minimalist style and top quality craftsmanship."

Founded in 2012, Mansur Gavriel crossed into profitability in its third season following 100 percent sell-throughs for its signature, mania-generating bucket bag. In 2015, the brand expanded into footwear, offering a range of mules, slides and sandals, followed by women’s ready-to-wear in 2017. Much like their extremely popular bags and shoes, the clothes were a testimony to the simplicity of form and the power of colour.

The new men’s line will be designed and produced by the same team that works on women’s clothing and accessories. “Our team — now at 73 employees — has been growing over the past year. Although production is still small, it’s grown and is still manageable,” said Gavriel.

The designers, who won “Accessories Designer of the Year” at the 2016 CFDA Awards and are also among the 2018 CFDA nominees for the same category, are focused on expanding the brand’s physical footprint, having just opened a new outpost in February in Los Angeles (its first on the West Coast and its third US store).

“It also has a café,” added Mansur. "We’ve never done anything like that before." She noted that they were focused this year on bolstering direct-to-consumer sales and finding new ways to deliver a sensory retail experience.

Mansur Gavriel's 4 Tips for Success as a Fashion Entrepreneur