Since she founded her independent, eponymous brand in 2008, Katrantzou has, on average, doubled revenues each year to reach more than $15 million in 2014 — and all without any significant outside investment along the way.

On the day that BoF sits down with Katrantzou at her North London headquarters, she has just finished announcing the brand’s latest arrival to her 55 assembled employees: a new chief executive, Trino Verkade. The hire is partially funded by Katrantzou’s recent BFC/Vogue Fashion Fund win, which includes a £200,000 prize.

“I have years of experience of working with designers who also truly appreciate creativity and pushing boundaries, which is definitely something I recognised in Mary — there is fearlessness there,” says Verkade, who joins from Thom Browne where she was executive vice president and began her career as Alexander McQueen’s first hire at his own brand, where she spent 18 years across a variety of roles. Her experience lies in parlaying strong aesthetics and creativity into commercial product lines, at a wide range of price points.

“Mary has already done the very high couture price points. I just want to bring it down to the more accessible pieces too. The language of Mary’s brand is broad and it applies to every category, whether it be knitwear, tailoring, outerwear.”

“In the past year all of our focus has been on building a senior management group that can take us to the next level,” says Katrantzou. “Meaning the product, how we scale the business, our distribution channels, our timing, our production, getting better on every single level. We have the best accounts in the world; we have been lucky enough to build a distribution that I am really proud of, so now it is about allowing them to buy deeper into the brand.” 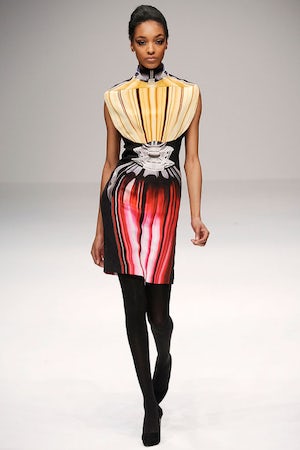 Katrantzou came out of the stalls strong in 2008, and has since built her business at a breakneck pace. Having begun training as an architect at Rhode Island’s School of Design, she transferred to Central Saint Martin’s to study textiles and a fashion MA, furthering her interest in applied design (the application of design and decoration to everyday objects to make them aesthetically pleasing). Her graduate collection of digitised trompe l'oeil prints of oversized jewellery on simple shift dresses served as a counterpoint to the minimalist movement that was dominating the runways at the time.

Sarah Mower of US Vogue was an early champion. Following Katrantzou’s debut proper for Autumn/Winter 2009, themed around antique perfume bottles and supported by NewGen funding from the British Fashion Council, Mower wrote in her Style.com review: “It may be about the toughest time to launch a business, but this is a young talent whose vision and attitude are, by every indication, just about perfectly adapted to make things happen for herself.”

With her very first collection, Katrantzou secured influential stockists including Browns in London, Colette in Paris and Joyce in Greater China. “I was doing instinctively what felt new at the moment, using a technology that was part of my background because I studied textiles before I did my MA in fashion. To me it was more of a technology that I used to tap into collections that revolved around a theme, that usually originated in applied design, which I then transformed that into something desirable, both because of its pattern and its colour, but also because of its form,” says Katrantzou.

In the ensuing 11 seasons, up until Spring/Summer 2014, Katrantzou wowed critics and buyers at London Fashion Weeks as she took inspiration from the graphic lines of objets d'art and everyday household items such as typewriters, lampshades and postage stamps. Her distribution network grew to encompass heavyweight names including Bergdorf Goodman, Neiman Marcus, Saks, Net-a-Porter and Matches Fashion.

“When you sell from the beginning, you measure the success of the season by its commercial validity. Had we started as a brand that was everywhere in press but had no commercial reality, what would motivate me would be different. But when you do your own sales, you are talking to your retailers and taking their feedback — it informs how you morph into the designer you become,” she explains.

Recognition in the form of international awards and collaboration requests flooded in. “The collaborations stemmed from my desire to learn about a product category of which I had no prior knowledge. So when we collaborated with Moncler, it was about understanding outerwear; with Longchamp we had not done any accessories; when we did Adidas it was [about] tapping into sportswear and activewear.”

“I am inquisitive, and I was never afraid to ask. That allows you to grow when you have no experience in building a brand. I think I had the right balance of making bold decisions, bold moves, and having the conviction to stay behind them, while at the same time taking advice from people I really respected in the industry, who were very generous with me,” she continues.

Pivoting away from digital prints 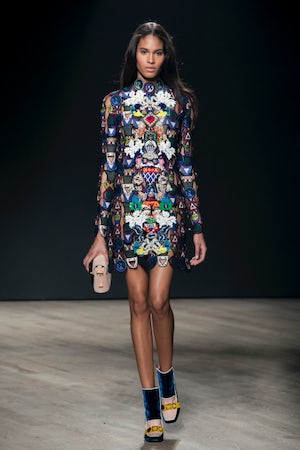 For her Autumn/Winter 2014 collection, Katrantzou took the greatest risk of her career to date. She said farewell to her signature digital print. “There is an interesting tension that designers face when they grow fast. Having a distinct signature when you start out helps you broaden awareness and creates rapid growth, because of the uniqueness of that signature. At a luxury level you need to give your customers something unique. But when that signature is so widely adopted, like digital print was, it became very difficult to distinguish the nuances between each designer, each print,” she says.

Katrantzou also faced being pigeonholed for doing only one thing. “I think sometimes print has such power visually, that it obliterates anything else that you have created within that collection, she says. “I had reached a point of saturation; I didn’t feel I was saying something new.”

The collection that marked the creative shift was more abstract than in previous years – with symbols and insignias as principle themes. However, to the customer, the illusion of print remained in the form of graphic or textured fabrics including jacquards, laces and brocades, a move that was largely embraced by her wholesale partners.

Around the same time, five years into the business, Katrantzou made her first foray into direct to consumer retail, not with a bricks-and-mortar store like so many of her peers, but via e-commerce, enabling her to tap into a global market. “We bought really deeply into the collection, which has given us incredible insight into what our customer buys. Forty percent of our sales are US based, which has overtaken Europe and the UK as our biggest market,” she adds.

“It allowed us to analyse the business and understand who our woman is, which is invaluable for retail,” adds Verkade.

But bricks and mortar retail is still on the cards. Earlier this year Katrantzou came close to signing a lease on London’s Mount Street, which has seen openings from Christopher Kane, Roksanda Ilincic and Simone Rocha in the past 12 months. “For a store, you need your range to have moved beyond ready-to-wear. It is not like we have not tried accessories; we have a collection that is doing extremely well, but that is far from being a fully-fledged range, that you would want to open a store with,” says Katrantzou. 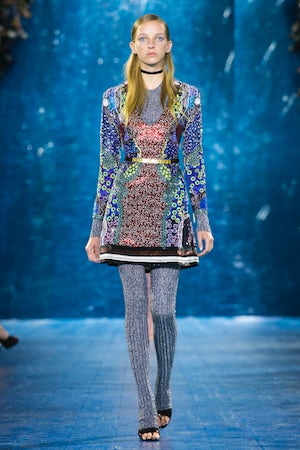 “A huge reason why I wanted Trino by my side is that she is incredible at looking at product, merchandising and scaling a business that has had substantial growth…where we are really global with a full wardrobe.”

“There is phase one when you are building a signature. Then there is elevating that signature to establish a luxury positioning, and then there is consolidating all of that with a very tiered approach. And that’s exactly what we are doing now. It is like a pyramid, where you have developed the top, and there is so much we can build around that,” Katrantzou continues.

“I am really focused on putting a beautiful product in store. Everyone here will be sick of hearing me say that,” adds Verkade, with a laugh.“Outerwear is one of our fastest growing categories, and it is a category that has huge potential. There is a lot of opportunity to focus on categories where we have already seen the potential for growth through sales.”

“It is about getting better before we go bigger,” continues Verkade. “Right now it is about looking at everything we can do to be a better partner with our stores, to give something better to our customers, building the same amazing relationships we have with our retailers with the mills and suppliers.”

In the past year Katrantzou’s focus has been on building a senior management group that can take her brand to “the next level.” Along with Verkade, Katrantzou hired a new design director, Simon Simonton, who cut his teeth at Tom Ford, Givenchy and Alexander McQueen.

And would she rule out ever taking on an investor? “In the future, who knows,” says Katrantzou. “But true global scale is our ambition.”