NEW YORK, United States — The turmoil engulfing financial markets has sent the share prices of fashion brands and retailers tumbling across the board. No company, from struggling mall chains to high-flying luxury conglomerates, has been spared.

The declines are a sign that the coronavirus pandemic, which has shut down brick-and-mortar retail across wide swaths of Europe and North America, has shattered investors’ confidence in the fashion industry’s ability to generate profits. But there’s a big difference between the 64 percent decline in Macy’s shares since late February, and the more mild dips of Nike or TJX Companies. What explains the gap?

The answer all comes down to cash, and which brands have access to copious amounts of it. Morgan Stanley estimates retail foot traffic fell 80 percent between March 16 and March 22, while Moody’s predicts department stores and apparel retailers will see operating income plunge up to 40 percent this year, more than any other retail sector. Many companies have drawn down their credit lines and reached out to lenders for additional loans, with a goal of building a big enough financial cushion to weather weeks or even months of lower-than-expected revenue.

Demand is coming down, so the question is, how will retailers manage their cash?

Stock market moves reflect how much liquidity each retailer has access to. The more cash on hand, the better-positioned a company is to weather the storm.

“Demand is coming down, so the question is, how will retailers manage their cash?” said Bernstein analyst Jamie Merriman. “This is what investors are focused on.”

The worst-performing stocks are department stores and traditional apparel and footwear retailers — a sector already challenged before the pandemic, and one that stands to be among the biggest losers if malls remain closed for months. Gap Inc.’s shares are down by half over the last month, while Capri, owner of Michael Kors and Versace, is off by 54 percent.

The sales outlook isn’t uniformly bleak. Analysts believe that sportswear, for instance, has an advantage as consumers favour comfortable, lounge-worthy apparel while they work from home. Lululemon, Nike and Adidas are in this category. Since February 19, for instance, Lululemon’s stock dropped about 25 percent, compared to about 30 percent for the S&P 500 Index.

Off-price retail is also expected to benefit as department stores and brands look for places to shift unsold inventory once their stores reopen. The category leaders, T.J. Maxx and Marshalls parent TJX Companies, as well as Ross Stores, are both down about 30 percent in the past month.

Luxury stalwarts like Kering, LVMH and Hermès also stand to retain value, Bernstein’s Luca Solca said, because of their strength over time. These companies benefit from minimal debt and saw strong sales before the global crisis emerged thanks to macroeconomic trends of income inequality that created a large audience for luxury brands. The luxury industry, therefore, has consistently outpaced global GDP growth, Luca explained.

“Investors are keen to increase their exposure to high-quality names,” he said. “Hermès, LVMH, Moncler are still at the top – not because they have necessarily produced better performance so far, but because there is a higher appetite for these stocks, which are seen as attractive as they’ve provided long-term growth.” 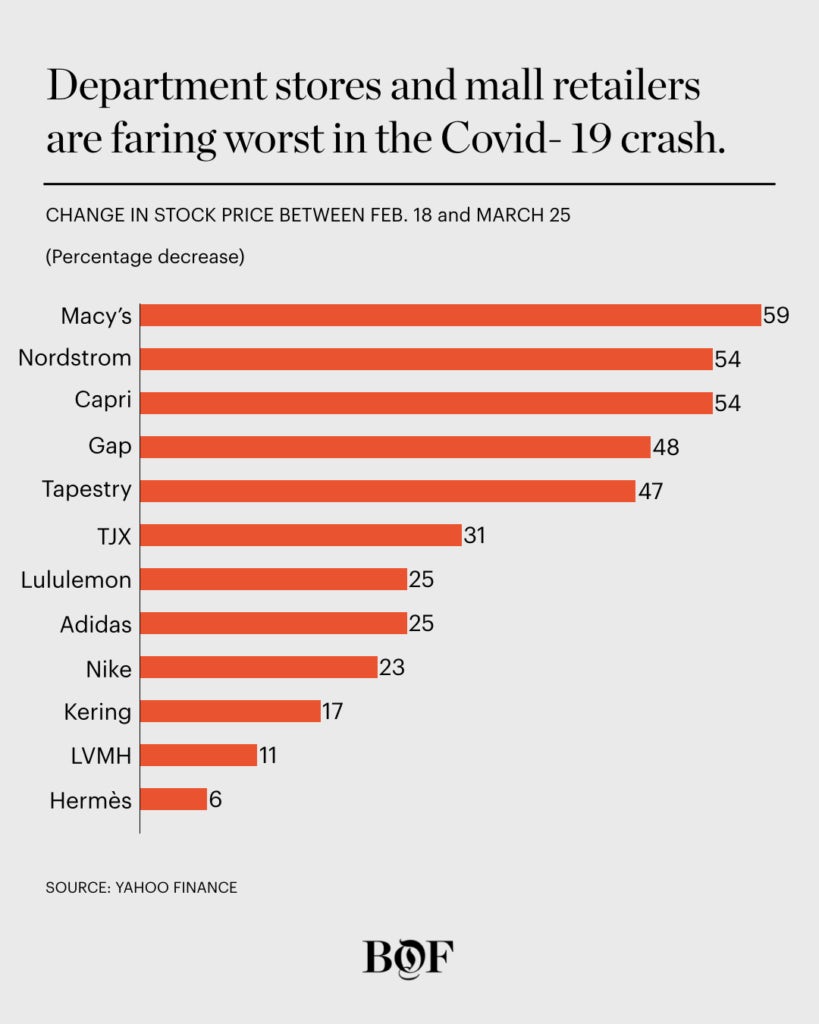 Even outside these sectors, retailers with a robust e-commerce operation have an advantage, as housebound consumers can still shop online.

The risk is that the pandemic forces distribution centres to shutter. Online resale platform Vestiaire Collective, for example, temporarily closed its New York warehouse last week, per Governor Andrew Cuomo's executive to keep all non-essential workers at home. Resale is a sector that may be hit especially hard by Covid-19; The RealReal’s stock fell more than 60 percent in the past month.

Most large retailers have a line of credit they can draw on to pay for new projects or paper over a rough patch. Many are making full use of that option now. Analysts say it’s a sensible move, given that there is so little clarity about how long nationwide lockdowns will last.

Macy’s announced Tuesday that it is drawing down $1.5 billion under its revolving credit line, while Vans and North Face parent VF Corp. said Monday that it would draw down $1 billion of its $2.25 billion revolver. Capri Holdings, meanwhile, told investors on March 20 that it will supplement its $500 million in cash with $300 million from its revolving credit facility.

“We’ve seen massive requests, in the billions,” one retail bank lender told BoF. “Some of these retailers are just hoarding cash.”

To save cash, a number of companies including Macy’s, H&M and Nordstrom have also suspended their dividend payments. Macy’s and Nordstrom stopped their stock buyback programs as well. (Buybacks have been the topic of recent controversy for possible airline bailouts. Instead of preserving their cash, companies like Boeing and Delta Airlines have spent tens of billions of dollars in the past decade transferring cash to shareholders to boost the value of their stocks.)

Inventory Is a Liability

A critical reason for why department stores are especially vulnerable in this crisis is because of the inventory risk they carry. A retail rule of thumb, according to Kantar Consulting SVP David Marcotte, is that the more products carried, the more cash that’s tied up in inventory.

That inventory will continue to be a drag on retailers even when stores reopen, as they’ll be forced to hold clearance sales.

Off-price players, therefore, have another advantage in their inventory-light model, Merriman said. Stores like T.J. Maxx and Ross buy much of their merchandise based on what manufacturers are heavily discounting rather than having a set quantity per season. They also sell their products quicker than the average department store, so inventory risk at any given point is lower.

“These stores don’t have inventory overhang,” Merriman said. “And they’ll also be able to benefit from all the inventory that’s building up now throughout the apparel supply chain.”

For retailers without revolver facilities they can tap into, there are other options, financial experts say. There are commercial paper programs, which are short-term debts issued by companies to finance short-term obligations, such as inventory and payroll, Merriman said, pointing to Nike and VF Corp. as examples of retailers with such arrangements.

Asking lenders for additional capital in temporary or bridge loans is another option, she added. “Lenders understand that it is a time to meet in the middle now, it is not a time to exercise rights and remedies and clamp down on control.”

It’s also possible for retailers to leverage their assets as collateral, said Brock Blake, founder and chief executive of Lendio, an online platform that connects small business owners to private lenders. These assets could be equity in real estate and accounts receivable, which banks can lend against.

Lenders understand that it is a time to meet in the middle now, it is not a time to exercise rights and remedies and clamp down on control.

The most promising development for small operations, nonetheless, is the $2 trillion stimulus package, which is primed to pass Congress and the White House this week. This relief bill opens up $349 billion of financial support to the Small Business Administration, which will offer relief loans of up to $10 million at low rates. It also offers an additional $500 billion in loans for larger businesses.

The likely passage of the bill has propelled a substantial recovery in the stock market. The S&P 500 jumped 15 percent between Monday, March 23 and Thursday, March 26.

Companies also have the option of raising debt and equity, though lenders and investors are likely reluctant to part with cash in today’s environment.

Under the package, banks will be required to bring more lending, according to Jon Pasternak, a bankruptcy attorney and partner at Davidoff Hutcher & Citron LLP.

“There’s got to be cooperation because there could be a whole domino effect: retailers hurting landlords and then the real estate investment community,” he said. “There’s so much at stake and the whole thing is delicately intertwined.”

Lastly, Blake said, companies must remember to manage cash. “Ask your landlords for a reprieve and just put out any payments you have.”

Coronavirus Is Already Changing How People Shop. Here's How.