MILAN, Italy — When Demna Gvasalia put oversized ski parkas on the runway at Balenciaga, some traced the moment back to the influence of Italian sportswear label Stone Island, one of the first to blur the boundaries between technical wear, streetwear and high-fashion. Indeed, from its inception, Stone Island aligned itself with a new mode of dressing that defied easy categorisation. “The new generation of kids — in Italy, they were called the Paninari — was less politically involved than mine, but more interested in dressing,” says Carlo Rivetti, Stone Island’s president and creative director, who founded the label in 1982 with designer Massimo Osti. “Their shirt would be by Burlington, the sweatshirt by Best Company and the jacket by Moncler. And they quickly embraced Stone Island.” Particularly popular were the label’s garment-dyed utilitarian jackets, which took inspiration from military uniforms and workwear.

“Stone Island was a company that was born by accident,” recalls Rivetti, referring to Osti’s early experiments with the resin-coated canvas used for military tarps from which the designer made Stone Island’s first jackets. “We had no business strategy and we had no branding strategy,” he continues. What Rivetti did have, however, was the support of his family’s company, Gruppo GFT, one of the world’s largest apparel manufacturers, which produced and distributed clothes for Italian brands like Armani, Valentino and Ungaro. The company got behind the fledging Stone Island and it sold fast. “GFT's sportswear division was doing about 33 billion lira, mainly in Italy and Germany, when Stone Island was born,” says Rivetti. By the second half of the 1980s, Gruppo GFT's sportswear division was generating about 50 billion lira in sales, with over half of its revenue coming from Stone Island, according to the company. “There was no real men’s fashion then. And Stone Island hit upon the youth movements that wanted to distinguish themselves — the Paninari in Italy and the Mod’s revival and terrace culture in the UK,” explains Rivetti. 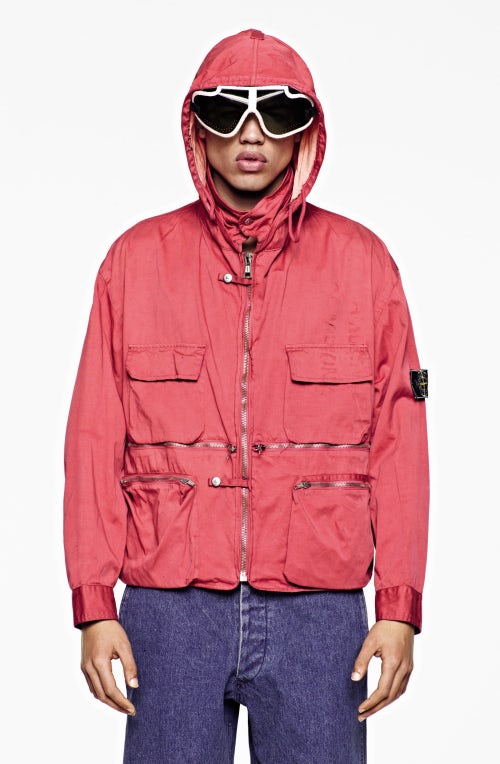 Indeed, in England, Stone Island was embraced by a breed of rowdy football fans associated with the rise of “casual” or “terrace” culture, a reference to the traditional standing areas of sports stadiums. At first, hardcore English football fans bought Stone Island jackets when following their club to Italy as a means of showing that their side was strong enough to play internationally. “It resonated with young customers because it was different. It was functional, kept you warm and dry at the stadium and had a recognisable detachable logo on the left arm,” says Rivetti, referring to the military-inspired insignia which appears on virtually all the company’s garments. “We liked the idea of insignia, because it carried instant meaning.”

The insignia was also a reference to the military-grade research and development embraced by Osti. “It’s always been at the forefront of apparel innovation and technology, as well as carving out its own style subculture and a powerful heritage,” explains Alastair McKimm, fashion director of i-D. Indeed, Osti poured time and resources into creating new fabrics, modifying existing ones and appropriating the kind of technical materials not normally used for clothing.

When Manchester United star Eric Cantona began wearing a Stone Island jacket during post-match interviews, he set off a wave of emulation amongst football fans in England and across Europe. “England was a key point for us, because it started the internationalisation of the brand,” recalls Rivetti. “England influenced Holland and the rest of northern Europe at the end of the 1980s. Afterward came Japan and, later, Korea.” Europe is still the biggest market for Stone Island, accounting for 80 percent of sales, followed by Asia.

Now, the brand is making a major push into North America, where it is relatively unknown and significantly underpenetrated. In 2015, Stone Island generated €87 million ($97 million) in global sales revenue, a 10 percent increase on 2014. But North America, with only 44 of Stone Island’s 1,200 stockists, accounted for a mere 5 percent of global sales. Of course, Stone Island’s link to European football culture doesn’t translate in the US. But the label has received a boost from rappers like Drake and Travis Scott, who have incorporated Stone Island into their wardrobes. In 2015, the number of sessions on Stone Island’s US website grew 51 percent over the year before, while new users increased by 37 percent, an indicator of growing consumer awareness, according to the company.

Rivetti sees opportunity and hopes that rising interest in luxury streetwear, along with Stone Island’s unique technical prowess, will help to drive sales. (Osti left Stone Island in 1994, but was replaced by Paul Harvey, who studied textile design at London’s Central Saint Martins and is equally enthralled with technical fabrication, having experimented with everything from reflective fabric to thermo-sensitive jersey which changes colour with fluctuations in temperature. Harvey left in 2008 and Stone Island is now designed by a team under Rivetti's direction.) 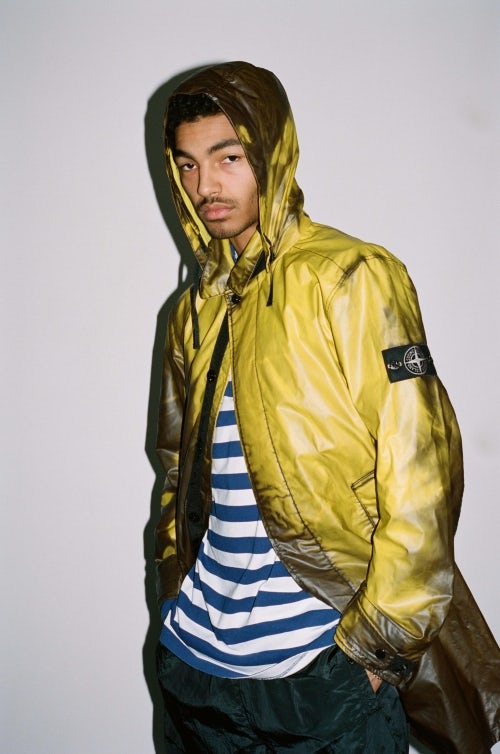 Stone Island has also earned strong stamps of approval from Nike (the label partnered with the global sportswear giant to produce a version of its iconic Windrunner jacket rendered in Stone Island’s proprietary nylon metal fabric) and Supreme (a third capsule collection with the brand will drop later this week), which Rivetti hopes will help to drive greater awareness and brand preference.

“We’ve blended our expertise in design with the craft, technical material development and dyeing that Stone Island is famous for. The resulting NikeLab x Stone Island Windrunner represents a unique interpretation of our foremost apparel icon,” says Joe Serino, Nike’s vice president of apparel for NikeLab. “Stone Island is a unique operation; a very special constellation of people and infrastructure that can't be replicated,” adds Errolson Hugh, designer of Acronym, who has collaborated with both Stone Island and Nike.

“If it wasn’t for Massimo Osti, I would not have become a designer,” continues Aitor Throup, who has also designed for Stone Island. “As a teenager in Burnley I was obsessed with Stone Island. I owe a lot to that brand. They showed me that dreams could become a reality and that clothing doesn’t have to be just clothing.”

Last month, Stone Island opened its first North America flagship in Los Angeles, which currently generates about $4,000 a day in sales, according to the company. A New York store is set to open in May. But there are no plans for additional North America stores and Rivet says Stone Island will tap demand elsewhere in the region via e-commerce.

Without pressure from investors, the family-owned company is taking things one step at a time. “There are no target numbers for North America,” reveals Rivetti. “We let things happen organically. What we want first is for the North American customer to understand the brand’s ethos, which is about product design.”

Editor's Note: This article was revised on 14 March 2016. A previous version of this article misstated that Gruppo GFT was generating 33 billion lira in annual sales when Stone Island was launched. That figure refers to Gruppo GFT's sportswear division.