Another week, another Farfetch announcement.

Today, Farfetch unveiled a strategic partnership with Chanel to enhance the French luxury house’s boutique experience with its "operating system" for physical retail. The move was the latest in a year of major announcements from Farfetch, designed, in part, as a drumroll to prime the markets in advance of its highly anticipated IPO.

In February 2017, Farfetch — a technology platform which connects consumers with a curated network of fashion boutiques and brands — revealed that Net-a-Porter founder Natalie Massenet was joining the company as non-executive co-chairman. In April, Farfetch launched a 90-minute delivery service with Gucci and unveiled its ambitious Store of the Future concept, an "operating system" for physical retail.

In June, the company announced partnerships with both Condé Nast and JD.com, China’s second largest e-commerce player. In November, Farfetch teamed up with Fendi to launch a digital customisation service.

And the pace is picking up. So far this month, Farfetch has already entered into a joint venture with Chalhoub Group, one of the biggest distributors of fashion and luxury goods in the Middle East; unveiled a partnership with Burberry to expand its global e-commerce distribution and launch a "show to door" London delivery service; and inked the deal with Chanel.

To be sure, each of these moves has strategic value to Farfetch. “We're focused on the development of our strategy. We're not announcing for the sake of announcing,” said Farfetch founder and CEO José Neves. “We're a company that is about doing things, not talking about things. We are committed to launching in the Middle East in the next six months. We're already working on integration with JD.com, which went live in October,” he continued. “We're not doing announcements because Susannah [Clark] our vice president of communications told us; we're doing them because they are absolutely the necessary steps for us to deliver our vision, which is to become the platform for the industry.”

But the timing and pace of these announcements is telling. And Clark, who joined the company in August, was previously communications partner at tech-focused venture firm EQT Ventures and worked on the 2014 IPO of King, which poached her from Moneysupermarket, a price comparison site.

Farfetch has raised over $700 million in funding and is widely known to be gearing up for a public offering, which Neves has called “the next financial milestone for the business.” He has been reluctant to lay out a specific timetable for the flotation but according to a source close to the deal, the company is planning to IPO in New York in September 2018.

On Tuesday, CNBC cited sources saying Farfetch plans to interview bankers in the coming weeks. Now, the crescendo of announcements makes it more clear than ever: the Farfetch IPO is happening — this year. But the big question is valuation.

According to a source close to the deal, the company is planning to IPO at a valuation greater than $5 billion, making it one of the highest-valued fashion technology companies in the world — on par with Yoox Net-a-Porter (YNAP) which has a market cap of $3.4 billion but last month attracted a bid from Richemont valuing the business at about €5 billion, and well ahead of Matches Fashion, which sold to Apax for around $1 billion in September.

But the IPO price will only be known for sure just before the listing and the industry will be watching closely to see how the markets react. What’s for sure is Farfetch will have a very interesting investor story to tell.

Gucci boosts Kering's fourth-quarter sales growth. The French conglomerate reported its most profitable year in history, led by continued explosive growth at Gucci, with sales at the Italian megabrand up by 42.6 percent in the fourth quarter, reaching €6.2 billion ($7.6 billion) for 2017 overall. Indeed, Gucci makes up 57 percent of Kering's luxury business revenue and 73 percent of operating income. Kering revenues for fiscal year 2017 rose by 27.2 percent to €15.5 billion ($19 billion at current exchange).

Fosun said to outbid Mayhoola for Lanvin. The Chinese conglomerate has won a bidding contest for the world’s oldest continuously running fashion house, beating Qatari fund Mayhoola For Investments, according to market reports. An official announcement is expected this week. Fosun is said to be injecting more than €100 million into the near-bankrupt French label, which has faced a downward spiral since the sudden departure of former artistic director Alber Elbaz in October 2015, following disagreements with Lanvin owner Shaw-Lan Wang.

H&M forecasts physical stores to return to growth next year. Sales in comparable stores will continue to fall despite gradual improvement, but online sales should rise at least 25 percent this year, H&M said. The Swedish apparel retailer is holding its first capital markets day in Stockholm, responding to criticism that it needs to be more transparent with investors. For the first time, it will break out e-commerce from physical store sales and profit.

Under Armour's global push helps ease slump at home. The athletic-wear company reported fourth-quarter revenue that topped projections, led by a 47 percent increase in sales outside North America. That helped drive the stock up as much as 18 percent, the most in more than two years. As part of a plan to scale back operations, the company will reduce how many products it makes by as much as 40 percent by the end of 2019.

Nestlé rules out raising stake in L'Oréal. The Swiss food giant said it had decided not to renew a shareholder agreement with L‘Oreal to maintain “all available options,” but had no intention to increase its 23 percent stake and remained committed to the cosmetics company. L‘Oréal’s CEO last week said the company was ready to buy back the stake, should Nestlé decide to sell. 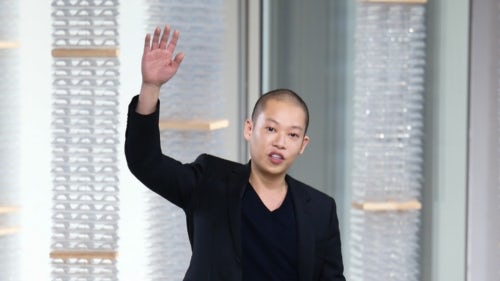 Jason Wu parts ways with Hugo Boss. His Autumn/Winter 2018 show, presented during New York Fashion Week, will be the designer's final collection as artistic director for the German fashion house. Wu's departure follows 18 months of strategic changes at Hugo Boss, which has struggled with unclear positioning between premium and luxury.

Courrèges names artistic director. The French house has named Yolanda Zobel as its new artistic director, effective February 26. She succeeds design duo Sébastien Meyer and Arnaud Vaillant, who announced their departure last July after two years at the creative helm. This is the first major appointment overseen by new chief executive Christina Ahlers, who took up her role on Monday.

The Ordinary founder triggers online firestorm. Deciem, owner of transparent beauty brand The Ordinary, has come under fire after founder and chief executive Brandon Truaxe insulted a competitor; cut the company's marketing team after a near-hacking incident; announced the discontinuation of one of the company's lines without first informing the collaborator who lent his name to the project; and alienated fans who voiced concern over his behaviour and allegations of racism — all via Instagram.

Guess investigates sexual harassment claims against CEO. The brand has formed a special committee to oversee an ongoing investigation into allegations of sexual harassment and other improper conduct by chief executive Paul Marciano. Marciano has denied those allegations since actress and brand model Kate Upton called out the co-founder for sexually harassing women.

British Vogue criticised for unpaid internships. The magazine has been called out for using interns for month-long placements that were unpaid, though travel expenses of up to £80 a week were reimbursed. Parent company Condé Nast said it did not have a legal obligation to pay minimum wage to those carrying out what it called "workplace shadowing," which it said offered “the opportunity to learn how our workplace operates, test their interest in a possible future career, as well as providing invaluable opportunities to network and improving their skillset in relation to future employment.”

Burberry teams up with Farfetch. The British fashion company will work closely with the e-commerce marketplace — tipped for a New York stock market listing later this year — to expand its distribution globally, giving the brand access to over 150 countries. As part of the partnership, Farfetch will provide around-the-clock deliveries in London of Burberry's latest collection in the 24 hours after it is presented at fashion week on February 17.

Amazon wants to start its own delivery service. The company is preparing a delivery service for businesses, which would compete directly with UPS and FedEx, according to reports. Deliveries are said to begin in Los Angeles in the coming weeks. The news follows a report that the US e-commerce giant will cut hundreds of jobs at its headquarters at Seattle, while looking to create 2,000 more in France, its largest market in Europe after Britain and Germany.

JD.com to raise about $2.5 billion selling stake in logistics unit. The e-commerce operator will retain an 81 percent stake after the deal is completed this quarter, which suggests a valuation on the business of more than $10 billion. The new funds will help JD Logistics supercharge plans to build delivery and warehouse networks around the world to fuel its e-commerce expansion.

Echo Look to offer fashion advice from Vogue and GQ. The Condé Nast publications are working with Amazon on content recommendations that lead to e-commerce. Staring on February 19, Echo Look, a camera-equipped version of the Alexa-powered devices, will feature content from the magazines on the home screen of its mobile app. Users take a selfie using the Look, and when they send it to the app, they’ll see fashion, celebrity or service content from the titles, some of it shoppable.