LONDON, United Kingdom — For decades, outdoor brands have catered to a core demographic of middle-aged mountaineers and outdoor sports devotees, with product innovation and practical performance gear, such as water-resistant parkas, sturdy fleece and waxed-cotton duffle bags. But increasingly, brands including The North Face, Columbia, Canada Goose and Penfield are teaming up with streetwear labels to target young, urban consumers — earning high-profile fans like Kanye West, Drake and A$AP Rocky along the way.

For Autumn/Winter 2007, The North Face launched its first outerwear collaboration with streetwear label Supreme, comprising two new versions of the outdoor brand’s staple Summit Series jacket. The collaborative items — which took a more design-focussed approach to The North Face’s practical gear — sold out within minutes and kick-started a decade-long string of collaborations between the two brands, which is now in its 17th consecutive season. Waterproof jackets from the most recent Spring/Summer 2016 collaboration are currently on offer for $935 on eBay and $910 on luxury menswear resale site Grailed — more than double the original retail price of $388. In 2016, The North Face also launched Black Label, its own streetwear-inspired line, in Europe, having launched Purple Label, an equivalent range available in Japan, in 2003.

The North Face is not the only outdoor brand targeting the urban apparel market, which was valued at $75 billion in 2014 by market research firm WeConnect. Since 2014, Canada Goose has worked with Drake’s streetwear label OVO to put a new spin on its popular items, while in December, Columbia launched a collaboration with Ronnie Fieg, founder of cult New York streetwear store Kith.

“Collaborations come in handy because you’re talking to a whole other audience who you may not be speaking to before,” says Gene Chui, head of marketing at Penfield, an outdoor label known for its down-filled jackets, which since the early 2000s has teamed up with contemporary streetwear labels and retailers including Stüssy, Wood Wood and A Life. “It’s the younger consumer with whom we can experiment, whilst still being able to fall back on our classical sales, which generate the most revenue and are derived from our classic outdoorsy consumer who is looking for the heritage product,” he says.

It's the younger consumer with whom we can experiment.

For outdoor brands, streetwear presents the opportunity to find new levers of growth — something these businesses can find hard to obtain from their traditional customer, who values long-lasting, non-trend-led products. “The targeted older generation is in replenishment mode, only purchasing when the current apparel wears out, thus forming a slower cycle,” says Marshal Cohen, chief retail analyst at the NPD Group. “The younger generation is in the building mode, so they’re in a faster purchasing frequency cycle,” he adds. Last year, Columbia’s revenue increased 11 percent to $2.33 billion, while VF Corporation, which owns The North Face, Eastpak and Vans (as well as brands including Wrangler and 7 For All Mankind) posted $12.4 billion in sales.

Streetwear collaborations are also an opportunity for outerwear brands to secure their future customer base. “If anything, I think the focus on the urban demographic will convert someone who buys an item from a collaboration when they’re 15 and trusts the brand. Once they turn 30 [they] will be buying this jacket from the main line. It cultivates brand loyalty,” says Jian DeLeon, senior menswear editor at WGSN. Chui agrees that, in recent years, Penfield has focused on the streetwear consumer “to ensure [they are] slowly moving into the classical side of the brand, once they get older.” 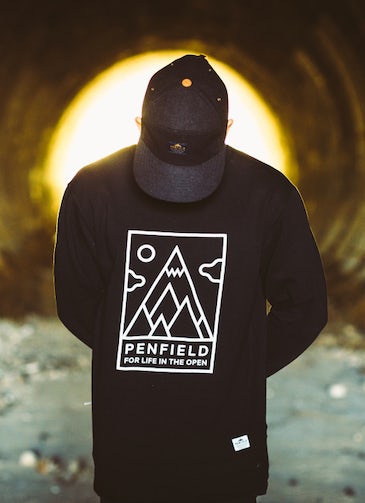 “We have seen that the appetite for technical outerwear amongst the younger demographic has been on the rise in recent seasons,” says Darren Skey, head of menswear at Harvey Nichols, which sells traditional outerwear brands like The North Face, Canada Goose and Arc’teryx on the shop floor alongside streetwear labels including Fear of God, Hood by Air and Off-White.

According to DeLeon, the link between outerwear labels’ pragmatic, utilitarian garments and street culture actually dates back to the 1980s. “There’s a little bit of seediness to it in terms of drug dealer culture in New York,” he says. “If you’re going to work the corner all day, you want to be in a comfortable pair of sneakers and you want to have something that would keep you warm.”

However, actively targeting a younger, cooler shopper may put these brands at risk of alienating their core customer base. "You have to be very careful. Take a brand like Timberland, which went so much towards streetwear that they got pigeonholed and lost their core base,” notes Cohen. Indeed, before Timberland was acquired by VF Corporation in 2011, the footwear focused outerwear brand’s move into streetwear saw its core customers lose interest, contributing to its revenue falling from $1.57 billion in 2006, to $1.29 billion in 2009.

The key, according to Gene Chui of Penfield, is for brands to make a clear distinction in the way they communicate to the two target markets: “For the younger demographic it’s about online channels, while the older guy is still looking at the print media that they trust,” he says. Cohen agrees, “Successfully selling to multiple generations is about marketing the same message but with two different languages.”