The Year Ahead: Macroeconomic Headwinds Put Companies on High Alert

Continued caution is advised as mounting underlying turmoil could disrupt relations among both developed and emerging market economies.

LONDON, United Kingdom — The global economy is under pressure, with political and geopolitical instability complicating the outlook for the global fashion industry in 2020. But this uncertainty is not limited to fashion. Executives from across industries are increasingly pessimistic, and central banks around the world are taking action and loosening monetary policy. Against this gloomy backdrop, the fashion industry is already facing major challenges, from sustainability issues to generational shifts, many of which require investment at a time when top-line revenues are potentially under threat. In 2020, fashion players will need to ensure they are suitably resilient — driving productivity gains while creating operational flexibility, digitising where most appropriate, divesting non-core assets to free up cash, and carefully monitoring and managing a wide range of risks.

Last year, we reported on the deteriorating outlook for the global economy. Since then, the situation has only worsened. No surprise then that 55 percent of respondents in the 2020 BoF-McKinsey annual executive survey expect conditions for the industry to worsen in the next year, up considerably from 42 percent last year. And of those 55 percent, half expect conditions to be “much” worse, compared to just a handful of respondents last year.

Trade tensions and Brexit continue to create significant uncertainty and are having a quantifiable impact on growth. The US-China trade war has led to billions of dollars of tariffs being imposed on imported goods between the two countries, with knock on implications around the globe. The IMF stated in July that reducing trade tensions and resolving uncertainty around trade agreements is a vital part of putting global growth on a stronger footing.

55 percent of respondents in the BoF-McKinsey annual executive survey expect conditions for the industry to worsen in the next year.

The overall numbers are bleak. The WTO more than halved its global trade volume growth forecast for 2019 to 1.2 percent and warned that the 2.7 percent growth it predicts for 2020 is still dependent on a return to “more normal trade relations.”

Every region faces challenges. In Europe, the UK service sector contracted in September, while the annualised output of the German economy was the lowest in six years. Meanwhile, Chinese GDP growth slowed to 6 percent in the third quarter of 2019 and September’s export figures were 3.2 percent lower than a year earlier, and nearly 22 percent lower to the US.

In the US, service-sector growth hit a three-year low at the start of October and for the first time since the financial crisis, yields on short-term US bonds eclipsed long-term bond yields in August, a closely followed recession indicator, which suggested investors were scrambling for safer assets.

Japan’s exports have been falling every month since the start of 2019, Brazil’s government halved its growth forecast for 2019 to just 0.8 percent in July, and India’s economy is growing at its slowest pace in the past six years.

Faced with this synchronised global downturn, central banks from the US to Australia are cutting interest rates, and the European Central Bank announced its biggest stimulus package in three years. In China, the People's Bank announced on New Year's Day that it was lowering the amount of reserves banks need to keep on hold, freeing up cash for lending.

Business leaders are understandably wary. In just six months, the number of executives who think the global economy will shrink has risen from less than half to over two-thirds. Three-quarters think global economic conditions are worse than six months ago and three-quarters rank trade conflicts as one of the biggest risks to global economic growth over the next year. 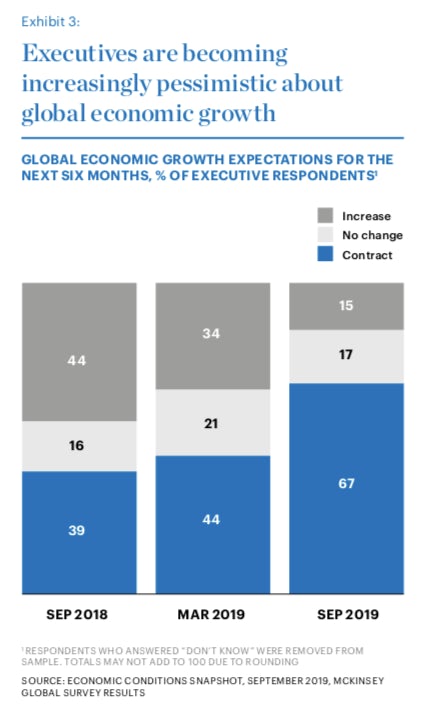 These concerns are already affecting business decisions. In October, WTO Director-General Roberto Azevêdo said, “Trade conflicts heighten uncertainty, which is leading some businesses to delay… productivity-enhancing investments.” In the UK, Bank of England research showed that uncertainty over leaving the EU has reduced capital spending on average by about 11 percent, while the number of companies including Brexit warnings in their annual report has more than doubled in the past six months.

Political upheavals in regions from Asia to Latin America are adding to the uncertainty and pessimism. The long-running protests in Hong Kong have had a significant impact on the economy, with Greater China retail sales significantly missing estimates and tourism from mainland China down 42 percent. Elsewhere, tensions in the Middle East and attacks on oil plants are affecting oil prices, which can have a major ripple effect around the world.

The fashion industry must tackle these existential challenges at a time when it faces significant internal issues of its own. The drive for sustainability is pushing many to rethink business models and move towards more responsible business practices. Customers’ demand for new and enhanced services is driving brands and retailers to invest heavily to meet these needs even at a time when more than half of fashion executives feel they do not sufficiently understand Generation-Z — now the largest global customer cohort.

The strain is starting to show. In September, vacancies in US shopping malls hit an eight-year high, with Sears, Victoria’s Secret and Charlotte Russe among the household names shutting outlets across the country. In the same month, Forever 21 joined a growing list of brick-and-mortar players who have filed for bankruptcy across different markets including Debenhams, the US arms of Roberto Cavalli and Diesel, and department store Barneys New York. Retail is the only sector in the US that has seen net job losses over the past two years, while in the UK, high street store closures are the highest since monitoring began in 2010. In Europe, Moody’s expects more than 40 percent of the retailers it rates to record lower profits in 2019 than in either of the previous two years. Even in China, clothing sales fell in April for the first time since 2009.

Given the worrying outlook we expect fashion companies to take steps to become more resilient in 2020. The first step is to develop a deep understanding of the risks they face. These can be codified in a “risk register” that differentiates between day-to-day risks, external disruptions (e.g., supply-chain interruptions, trade disputes), and disruptive strategic risks (e.g., remaining relevant amid changing consumer preferences or competing with challengers using new business models). Both the impact, likelihood and prioritisation of these risks will vary over time, so the risk register needs to be a dynamic document.

There are also lessons to be learned from previous economic crises. McKinsey’s analysis of companies that outperformed their peers during the last downturn showed that they made moves early and focused on earnings over revenue. By the time the downturn reached its 2009 trough, the EBITDA of these resilient players had risen by 10 percent, while their industry peers had lost nearly 15 percent.

Throughout the year ahead, fashion companies should remain on high alert. The most forward-thinking players will therefore also develop a resilience playbook to ensure they are prepared. This is likely to involve plans to boost productivity while ensuring operational flexibility (e.g., using variable contracts and more diverse supply sources), a clear approach to digitisation and a sharp focus on financial flexibility. This means divesting non-core and under-performing assets early so that the company has the cash on hand to make strategic investments as soon as the economic outlook improves — when their peers might be shedding assets. Crucially, all this will require enhanced leadership to be able to make quick decisions amid a high degree of uncertainty.