“Italian know-how and craftsmanship are synonymous with quality,” said Tassinari. “We’ve invested 8 percent of gross sales revenue on average in research and development in Italy over the past few years.”

The group’s “made in Italy” strategy dates back to 1980 when Aeffe was founded by Alberta Ferretti, in collaboration with her brother Massimo, and set a benchmark for high-quality Italian production at a time when many small and medium-sized businesses in the country were in decline.

In the years that followed, multiple economists became convinced that Italian producers could not compete with cheaper, more efficient manufacturers in Asia. Indeed, there was concern that Italy lacked the requisite labour, infrastructure and might, as once-thriving towns — Biella for its cashmere, Prato for its handbags and Belluno for sunglasses — no longer seemed sustainable. But Ferretti wasn’t convinced.

“The excellence of ‘made in Italy’ combined with hand-sewing has always been a feature of my clothing,” said Ferretti, who still manufactures in Italy and sees the focus on high-quality local production as key to her ability to attract a dedicated international following for her ultra-feminine dresses. It’s an approach to manufacturing adopted across the group’s brands. But “made in Italy” isn’t the only driver of Aeffe’s wider success. 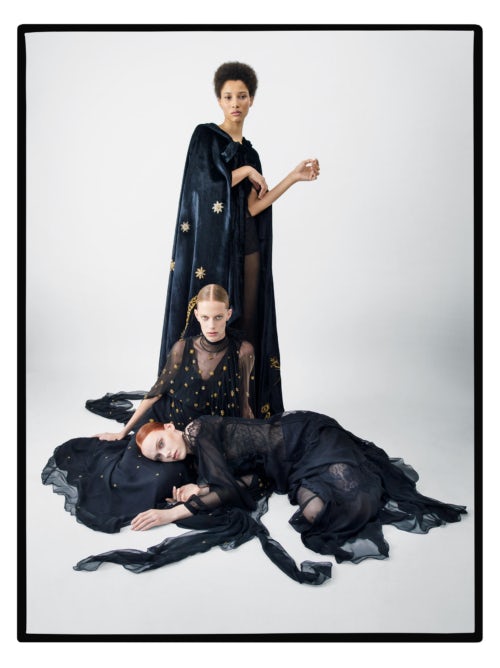 In recent years, the group has reported consistent growth, with revenues rising from €268.8 million ($319.4 million) for fiscal year 2015 to €280.7 million for 2016. For the first nine months of 2017, the group reported revenues of €235 million, a 9.9 percent increase on the same period in 2016, while net profit surged 144 percent to €11.9 million, having already tripled in the first nine months of last year. “We’re very satisfied with the group’s performance because it shows the market’s growing appreciation of our brands,” said Tassinari. “Our order book for the forthcoming Spring/Summer 2018 collections is up 15 percent from last year’s.”

A decade ago, Aeffe was mostly focused on ready-to-wear. Now, footwear and accessories drive 30 percent of total turnover, accounting for €80 million ($95.4) in revenue in 2017, up 12.8 percent from the year prior. “The key to strategic growth is to have diversified and mutually complementary offerings,” explained Tassinari.

The group’s acquisition of Pollini in 2011 was a critical strategic move. For the first nine months of 2017, the Emilia Romagna-based footwear firm grew sales revenue by 15.6 percent. But perhaps more importantly, the purchase brought Aeffe both immediate market share and expertise in shoes and leather goods. “The [acquisition] of Pollini acts as an industrial platform for the development and production of footwear and leather goods for all of the group’s brands,” said Tassinari.

The rise of Moschino was also a key driver of Aeffe’s success. Four years ago, Jeremy Scott was named creative director of the company’s flagship brand, an irreverent label that flourished in the ’80s but had declined since its founder, Franco Moschino, passed away in 1994. The appointment of Scott at the label signalled “a new phase for the brand,” said Tassinari.

Scott, a designer of choice for celebrities, made Moschino relevant again for a new audience. He designed the air-hostess dress that Britney Spears wore in her “Toxic” music video and created the beach ball-inspired outfit that Katy Perry appeared in at last year’s Super Bowl half-time show. Indeed, his ability to fuse elements of the prosaic with high fashion has made him popular not only among the stars, but also with fashion consumers.

“I think a message delivered with humour is more effective than one without,” the designer told BoF back in 2015. “Fashion should be an escapism and that push comes from the fantasy and desire to have something that is new and unique.”

The key to strategic growth is to have diversified and mutually complementary offerings.

Some critics reacted poorly to Scott’s exuberant kitsch. But Moschino now accounts for 70 percent of Aeffe’s turnover. In the nine months to September 2017, Moschino’s revenues grew 10.8 percent to €163.4 million. International growth, in particular, has surpassed expectation. “Moschino has been able to win over new consumers in markets that have so far been poorly developed, like China and Korea,” said Tassinari. “We’ve just inaugurated a franchised Moschino boutique in Kiev and we have plans for about 10 new openings in Asia by the end of 2017.”

Scott’s pop-culture accessories such as $73 phone case resembling a cleaning spray bottle have also resonated with younger consumers. “[Customers] are after statement items with a bold attitude,” said Gabriele Maggio, managing director of Moschino. “For 2018, the goal is to consolidate the brand in the market with a strategy that is more focused on handbags and shoes.”

Recently, Alberta Ferretti has also played a bigger part in the company’s success, thanks to a shift in strategy. For several years, the Italian brand — loved by customers who appreciated the designer’s twisting, tucking and draping techniques — depended on a small group of customers. But in the first nine months of 2017, revenues surged forward by 22.7 percent, accounting for 10 percent of the group's overall sales.

“We’re injecting a more vital, less elitist energy into the brand and exposing it to a wider target group,” said the designer, who currently has eight boutiques and 22 franchise stores worldwide, with plans to open direct-retail stores in Shanghai and Dubai by the end of the year.

“[Today] we also have something for the younger clientele…a new form of luxury,” she said. Earlier this year, the brand launched capsule collections available to buy immediately off the runway, as it looked to capitalise on the fashion immediacy model and logo-mania trends. The collection, titled “Rainbow Week,” comprised of seven knits in punchy hues, each emblazoned with a different day of the week: Monday, Tuesday, Wednesday.... The sweaters have since appeared all over Instagram, worn by popular figures from model Alessandra Ambrosio and stylist Carine Roitfeld to bloggers Leandra Medine and Chiara Ferragni.

“I don’t underestimate the way people shop today. New channels are increasingly transforming the shopping experience into a viral one — it’s what I call ‘the Instagram factor,’ which [affects] what people decide to buy,” added Ferretti. “We are endeavouring to speaking the language of a younger [consumer], who represents the future, but without forgetting the generations in their forties or fifties, who still account for a great deal [of our business].”

This means doubling down on digital. “Our strategic objective is to develop our e-commerce channel,” said Tassinari. “At present, online sales account for about 8 percent of overall turnover, which is why we’re working on some worthwhile developments in markets like the US and the Far East, where online purchasing is a significant mode of consumer behaviour.”

Despite the positive results from Moschino, Alberta Ferretti, Pollini and Philosophy di Lorenzo Serafini, the group reported a decline in its other operations, including the licenses for Jeremy Scott, Cedric Charlier and Blugirl, which represent 3.7 percent of total turnover. And despite Aeffe's growth, it’s still very far away from becoming an Italian rival to France’s major luxury conglomerates, LVMH and Kering.

“Moschino continues to be a strong growth driver for the group, but I would say Aeffe is far from being a conglomerate in Italy,” said Luca Solca, head of luxury goods at BNP Exane Paribas. “They lack scale.”

“In Italy, there isn’t any player with the financial strength, the management organisation and especially the will to become a consolidator of the industry,” added Mario Ortelli, ‎head of the luxury goods sector at ‎Sanford C. Bernstein. “Aeffe is too small to play this role.”

“Valentino, who, thanks to the financial strength of its Qatari controlling shareholders could play a role in future acquisitions. However, I believe that [they] will be focused on the relaunch of Balmain before any new acquisition,” said Ortelli. “I do not see the emergence of any other Italian consolidation champion in the market at the moment.”

Why Isn’t There an Italian LVMH?