BoF can exclusively reveal that Australian fashion and swimwear label Zimmermann has taken a minority investment from General Atlantic, a growth equity firm, to fuel the brand’s global expansion.

LONDON, United Kingdom — Sydney-based fashion and swimwear brand Zimmermann, known for its feminine floaty dresses and high-fashion resortwear, has taken a minority investment from global growth equity firm General Atlantic, BoF can reveal. General Atlantic will join the Zimmermann board and serve as “strategic partners” but not adopt an operational role in running the business. The terms of the deal were not disclosed and Zimmermann declined to reveal whether this is the company’s first investment.

“There’s a lot of momentum with what the business is doing in Australia, in particular, and internationally,” said Zimmermann creative director Nicky Zimmermann, who co-founded the company in 1991 with her sister Simone, its chief operations officer. “General Atlantic very much had the same vision for us as we did for the brand.”

“Nicky and Simone have created a unique and authentic brand with a clear and consistent aesthetic,” added Zimmermann chief executive officer Chris Olliver in a statement. “The opportunity to build on our brand vision and partner with a successful, experienced and globally-minded firm like General Atlantic is a very exciting one.”

General Atlantic has also invested in fashion brands Tory Burch and House of Anita Dongre, and was reportedly in advanced negotiations to invest in Alexander Wang in October last year. The firm’s other investments include fast-growing tech businesses Airbnb, Uber and Buzzfeed. “Recently, our team has been active in researching and meeting a number of growing global fashion brands, and Zimmermann really stood out to us,” said Andrew Ferrer, principal of the firm’s retail and consumer sector. “While Zimmermann’s roots are undeniably and proudly Australian, we view Zimmermann as a global brand.”

The investment will be used to accelerate Zimmermann’s global ambitions, including expanding its wholesale network and online presence, and opening stores in new markets. “The strategy going forwards is to push further into the United States with retail, into Europe and, eventually, into Asia,” said Nicky Zimmermann. She did not specify a time frame for new openings, but added, “we have actively been looking in the UK for over a year.” 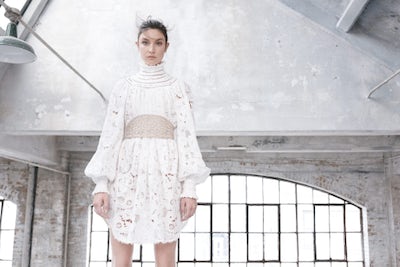 Currently, Zimmermann has 22 standalone stores — 18 in Australia and five in the US — and 250 stockists worldwide, including Barney’s New York, Saks 5th Avenue, Harrods and Net-a-Porter. Zimmermann declined to provide specific revenue figures.

Zimmermann, which was born when Nicky Zimmermann began designing and selling dresses at Paddington markets, a boutique market in Sydney, in the late 1980s, has expanded beyond its beachy, colourful collections of ready-to-wear and swimwear, into childrenswear and accessories. Today, ready-to-wear, which it presents at New York Fashion Week, makes up over half of Zimmermann’s revenues, while occasionwear and “beach to bar” garments from its swim collections are among the fastest-growing categories.

According to Nicky Zimmermann, further product expansion is in the pipeline. “Broadening what the products can be and working with more expertise in different areas of product is something I’m extremely interested in,” she said.

Zimmermann has tapped two fast-growing fashion product categories: first, swimwear, which has gained ground as a fashion purchase in recent years, with brands like Versace, Stella McCartney and Tory Burch launching luxury swimwear lines. According to Euromonitor, the global market for swimwear will grow from $20.9 billion in 2014 to $28.3 billion in 2019.

The label has also carved out a niche in the market for destinationwear, a new genre of garments that translate from the beach to the city, such as bohemian maxi-dresses, embellished kaftans and crochet shorts. The increased global mobility of consumers — who can now visit sunny destinations all year round — coupled with consumers’ desire to share their holidays (and holiday wardrobes) on social media, has created year-round demand for beachwear that transcends seasons and occasions — such as floaty dresses that can be worn to day weddings, or swimwear items that fit into an athleisure outfit.

"As a designer, Nicky talks a lot about being influenced by living in Sydney and the lifestyle in Australia, and from our conversations in the market certainly that is something that people see in the aesthetic," said Ferrer. "As a designer brand that also taps into these lifestyle elements, we think that Zimmermann is uniquely positioned."

On General Atlantic’s involvement in the company, Ferrer added, “We are not operators and we do not pretend to be.” Rather, he said GA will serve as a “strategic partner” that can use its global resources and experience to fuel growth. “When we see a brand with this level of creativity and connection with its consumers, we leap at the opportunity to become partners and help them continue to grow,” he said.