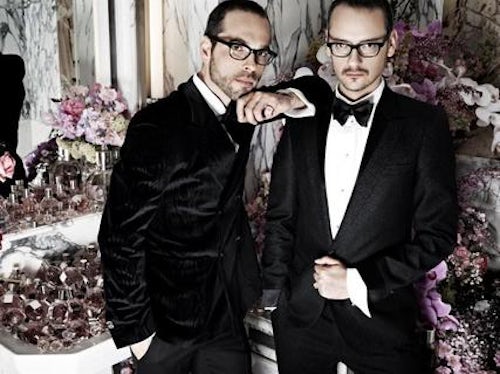 NEW YORK, United States — “We had big ambitions,” says Viktor Horsting on creating fashion house Viktor & Rolf with Rolf Snoeren. “From the very beginning we wanted to start very high,” he says, indicating the absolute apogee of couture elegance: “Start at the top, and everything else would fall into place after that. It was a very emotional ambition, not just in terms of the size of the business or wanting to be like a certain designer. It was more about fulfilling creative ambitions and working at the highest level possible.”

In 1993, the duo, known for their immaculate constructions and the pop-sensationalism of their shows, gave the world a glimpse of their aims with an underground presentation of their first collection in Paris, which won them the venerated Grand Prix de la Ville de Hyères. Seventeen years and nearly 50 collections later, Viktor & Rolf’s dramatic vision has itself become a sensation — the awards continue to roll in and in 2008, around the time both of the designers were celebrating their fortieth birthdays, their work was the subject of a retrospective at London’s esteemed Barbican Gallery.

Today, as they celebrate the five year anniversary of their wildly successful fragrance Flowerbomb with a rare trip to New York at the start of fashion week, the elegant gentlemen from the Netherlands say they finally have all the pieces in place to realize their vaulting ambition.

Flowerbomb is, in fact, an important and instructive window into the successes of the brand, says Snoeren, breakfasting in a West Village garden home bedecked with sherbet coloured flowers. “It proves that you can be creative and do well commercially,” he says. “Flowerbomb proves that you can turn anything into something beautiful. It is like a modern day weapon.”

The duo have previously stated their aim of reclaiming terrain for the republic of beauty. “Transformation,” Horsting adds, “is a very important point in our work.” With that in mind, the pair, who label themselves as “reflective” and “maybe analyzing too much,” say they “set out to work with a combination of perseverance, stubbornness and naiveté and just went on and on,” according to Horsting. “There wasn’t a blueprint, but I think we felt what was necessary, we felt the priorities. We go by gut feeling.”

“I think we were very trusting that if we did that,” Snoeren agrees, “and it works, the rest will come.” And come it has. In 2000 the house expanded to ready-to-wear, and in 2003 launch menswear line Monsieur. In 2006, Viktor & Rolf designed a special collection for the Swedish megastore H&M, broadening their appeal and reach. Subsequent collaborations have included work for L’Oreal, Dutch department store De Bijenkorf, luggage maker Samsonite and the champagne brand Piper-Heidsick — not to mention the duo’s striking costume designs for the opera, a jewelry line for crystal house Swarovski, couture eyelashes for Shu Uemura and a partridge in a pear tree.

These projects, Horsting says, “were very instinctive. We knew we had to do ready-to-wear, but we had no idea how to organise it all. But we knew it would be a logical follow up. We thought in a certain scale without knowing how to get there. We knew it wouldn’t be us organising it, we knew we would have to find a partner.” But through all the growth, the brand still maintains a succinct integrity and the designers have kept a clarity of vision that has served them well. Indeed, the label has a growing consumer base and their performances capture the pattering hearts of the fashion set who go wild for their theatrical showstoppers which have previously included guest performers like Tilda Swinton, Rufus Wainwright and, most recently, La Roux. But how? “It’s all about the details,” Snoeren says soberly.

That attention to detail has enabled Viktor & Rolf to get to a place where they can claim creative fulfillment, or, at least, satisfaction. This frees them up to turn their eyes of transformation upon the brand itself.

Enter Renzo Rosso, owner of Diesel and chairman of Only the Brave, who, in 2008, took a controlling stake in the company and announced a series of plans to expand the brand into new product lines and brick-and-mortar stores. The process of choosing a investment partner, which took two years of negotiations, Horsting says, came down to “a gut feeling combined with what is needed.” Snoeren adds, “after the success of Flowerbomb, we wanted to take the ready-to-wear to the next level.” Rosso, who the guys say is unique — a businessman who is also creative and would not interfere with their aesthetic and quality-control — appeared the perfect fit.

“It’s about opening stores, restructuring collections,” Snoeren says. “You can have a great show and be very good at it. But it’s a whole thing around it to make a business. It’s like a puzzle.” Forecasting the future he says, “We are kind of allergic to 5-year plans…” “But we are opening a store in Paris,” Horsting says, “and then New York.”

“For us, now,” Snoeren says, “it’s about building the business to it’s full potential.” Horsting adds, “creatively we are very happy, we’ve achieved many things and we have found a way of working that we love and we continue to do that. In terms of business we would love to develop more.”

“We feel we have to do that to become a real alternative for people to go somewhere that is a bit different,” Snoeren says. So, with Rosso’s wallet behind you and the creative carte blanche, do you have all the pieces you need? “Yes,” he says, “they are all there. It is a good feeling.”

Chris Wallace is an editor and writer based in New York. His work has appeared in Dossier Journal, i-D, Interview, and T.