SEOUL, South Korea — “Making it perfect, making it better, making it different — that was, and is, the guiding force for the business,” declared Woo Youngmi, long regarded by buyers as an unsung hero in global menswear. In a restrained black jumper, her hair a tousled gamine crop, Woo Youngmi’s appearance reflects the simplicity and precision of her menswear, renowned for its technical rigor. “Madam Woo,” as her employees call her, is engaging and composed even through the barriers of a translator and an intermittent Skype connection to her office in Seoul.

Woo founded Solid Homme, the contemporary menswear label that would evolve to become Solid Corporation and spawn Paris-based second line Wooyoungmi in 1988, in a country that would be almost unrecognizable to present-day visitors to South Korea. “If you think about Korea back in the ‘70s and early ‘80s, there was no fashion business at all. There was nothing,” Woo recalled. “Up until 1988 and the Olympics, we were not living in a developed country. Everything was closed, limited: the culture, the clothes, the whole land.” And yet, even in a nation without a fashion industry, Woo grew up with a singular ambition: “In a very simple way, I wanted to create the nicest clothes I could possibly make.”

Today, Woo’s business generates about $29.4 million in annual revenue and employs over 70 members of staff, split between Paris and Seoul. Her modern take on traditional menswear, distinguished by its clean proportions and nuanced application of technical and artistic details, is sold at 76 points of sale in 21 countries. But the designer is quick to stress that the growth of her company, more than a story of personal entrepreneurship alone, is inextricably linked to the rise of her country.

Born in Seoul, in 1959, to an architect father and a mother who taught both piano and art, Woo and her four siblings were exposed to a wider world from a young age, a result of her father’s extensive travel for work. “He would bring Elle and other magazines home from his travels abroad and I would realise there was another world [beyond Korea]. I was very curious about the world outside. I wanted to try all the things I had seen through the magazines.”

Not only was Woo awarded glimpses into a world beyond the then insular nation she lived in, but her family home was something of an incubator for the designer’s passion for clothes. “The environment I grew up in made me really curious about fashion,” she said. “When I was young, my mother would make clothes and textiles herself, so I began helping her and learning from her when I was ten or so.”

As Woo grew up, her love of fashion crystallized around two drivers. “I was obsessed with a silhouette and with the ideal of a particular man, which I had seen in magazines. I wanted to make clothes which that ideal of a man would wear — that was what drove me as a designer.” The second driver was her early ambition to build a real business. “Although there was no fashion business at the time I naturally thought of fashion as a business, because of those western influences.”

In 1978, Woo’s obsession took her to Sungkyunkwan University in Seoul to study fashion. However, far from being an idyllic period of youthful experimentation, her studies coincided with a period of dramatic upheaval in South Korea. Following the assassination of president Park Chung-Hee in 1979, the country was plunged into instability and descended into further chaos when army general Chun Doo-hwan took control of the government in a coup d’etat. Chun enforced martial law and closed the country’s universities. Then, beginning on 18th May, 686 paratroopers from the army’s special warfare command unit massacred 165 students at Chonnam National University in Kwangju. The killings sparked a movement that ultimately led to South Korea’s first steps towards democracy and economic progress. Woo was not personally affected by the violence, but the changes taking place in her homeland would later prove critical to the success of her business.

Following graduation, in 1983, Woo was selected to represent Korea in Japan’s Osaka Fashion Competition. “When I got into the competition I was working for LG Fashion [now LF Corp] as a womenswear designer, which I didn’t like. After winning Osaka, I thought ok, now I have got enough self-confidence to do the menswear that I wanted to do. That was the starting point; that was the moment that I realised I could actually try and make a business from my designs.” 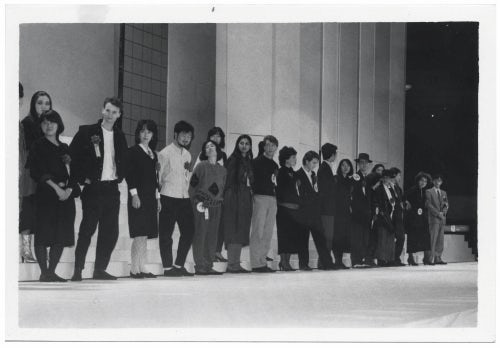 Woo Youngmi at the Osaka fashion competition in 1983 | Source: Wooyoungmi

When she launched Solid Homme in 1988, Woo opened a store, studio and offices in a three-storey building owned by her sister in the up-and-coming area of Apgujung-dong in Seoul. To cover the start-up costs, she submitted a business plan to her father-in-law, who lent her the money. “I can’t remember the exact amount, but it was three months of salary for the three employees, samples and operating costs of the store.” In 1989, Woo’s younger sister Woo Janghee, joined the company, aiding her sister in building her brand’s identity.

Woo was able to pay her rent and her employees by selling just two pieces of clothing a week. But from the get-go, Woo sold a lot more. It took her just one year to repay her debt to her father-in-law. 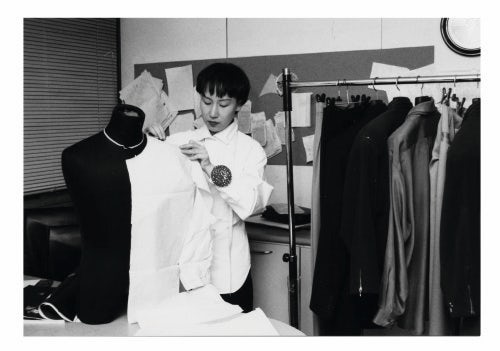 Indeed, her nascent business benefitted from a period of significant economic growth in South Korea: between 1982 and 1987, the country’s GDP growth averaged about 9.2 percent , rising to 12.5 percent the following year. The Seoul Olympics, held in 1988, represented a turning point for the nation, according to Woo. “When I first started the business, Korea was still felt devastated. But, around the Olympics there was dramatic development in Seoul and everything boomed — really fast. The economy started to dramatically change and the country evolved into a developed country.”

“The menswear customer changed a lot as the economy expanded,” recalled Woo. “The Korean man became braver and more sophisticated very quickly and they were willing to buy more — that really drove the business and expansion. Solid Homme’s success was a product of the financial boom, based both on production and designs and our understanding of the market and the trends of the market.”

In the early 1990s, Woo’s business entered the next stage of its development when the designer was approached by Hyundai, the only department store group in South Korea at the time. “There were no men’s stores whatsoever in that period, so, after I had started my little tiny boutique, in ‘92 or ‘93, they approached me to open a store-in-store. Today, we have 21 stores with the group. Every year we opened one or two stores. There wasn’t a big jump.” In the succeeding years Lotte, Shinsegae and Galleria also picked up Solid Homme.

The additional workload of running an expanding business took its toll on the designer, however. “It was really painful to try and do three or four different jobs at once: design, retail, operations, but managing to do so was the beginning of the business’ success. I had no education for the business, or management, but I just loved fashion and I believed that I could do it.”

In 2002, another international sporting event hosted by South Korea ushered in the next chapter in Woo’s career. “When the World Cup happened, the whole country was talking about globalisation and going out into the world. The Olympics started the business and with the World Cup, I started the international business. I didn’t plan it, I don’t even like sport very much at all, but everything happened with sport.”

That year, Woo launched her second line, Wooyoungmi, at Men’s Fashion Week in Paris. Her decision to found a second line was motivated by her desire to free the scope of her aesthetic. “The man for Solid Homme and the man for Wooyougmi are completely different. Solid Homme is the Korean man, body-wise, taste-wise and style-wise,” she explained. “Wooyoungmi is a more Western, global standard. I wanted to create a designer label where I could put in more of my taste without so many commercial considerations. Wooyoungmi is my unlimited ideal man. There are no limitations.” 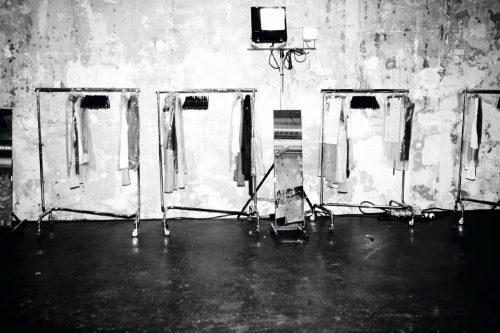 Wooyoungmi quickly found traction with the menswear cognoscenti. Today, the label is available in 21 countries, through 43 points of sale, and operates ‘ManMade’ concept stores in both Paris and Seoul. “I didn’t strategically plan the expansion of the business, it is just good design. The retailers, the department stores approached me. I didn’t strategically plan anything. That is what brought people to the show, that is what got the line into stores, people respect it,” she said.

Although menswear remains central to the label’s growth strategy, in recent years, Wooyoungmi has diversified its offering. Today, the label’s flagship stores stock products from tools to barware, stationary to accessories. The brand has also teamed up with Mr Porter on a series of exclusive collections, a move which helped Wooyoungmi to build wider awareness.

Now, the next generation of Woo’s family is getting involved in the business. Earlier this year, Woo’s daughter, Katie Chung, a Central Saint Martins graduate, was announced as co-creative director. Formerly, Chung, who shares her mother’s determined spirit, was art director of the business, responsible for the brand’s advertising campaigns, created in conjunction with artists. 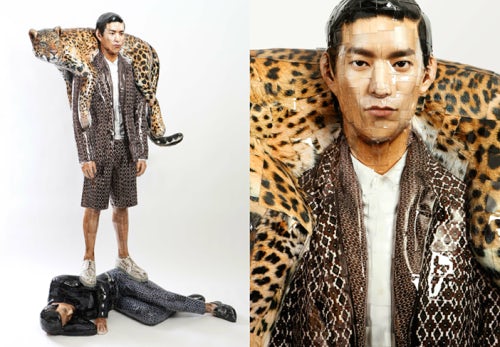 “Katie’s role is important because she is part of a global, international generation. Through Katie the brand is evolving into the next level and becoming truly global in its outlook. I trust my daughter, but being different ages and different generations can be challenging. I am not having a design discussion with the same generation, so we fight each other quite a lot, but, in the end, it is a positive thing and better for the brand.”

Indeed, trust is central to Woo’s approach to business. “It is really important to appoint the right people. I am a designer and realistically I do not have enough time to look after everything, so once I trust a person I have to rely upon them. Sometimes I pretend that I understand everything, but I don’t,” Woo confessed.

Editor's Note: This article was updated on 26 November, 2014. An earlier version of this article misstated that the entity previously known as LG Fashion is now named LG Bando Fashion. It is not. The company is now called LF Corp.