On a subtropical island in southern China, a group of cool young fashion designers march to the beat of their own drum.

On a subtropical island in southern China, a group of cool young fashion designers march to the beat of their own drum.

XIAMEN, China — “For me, the coolest thing [about the Xiamen scene] is that it is not dominated by a mature elite, but by young people,” says Shangguan Zhe, founder of the brand Sankuanz — and leader of a ‘gang’ of fashion insiders who have renounced the gruelling pace of life in China’s fashion capitals, preferring the independent spirit and laid-back vibe offered by the city of Xiamen.

“In the past, the youth didn’t have the opportunity to make a sound or have any right to speak. Today, everyone can express themselves,” he continues. “We’re still the minority here [in Xiamen], but there are many people like us in the rest of the world.”

Xiamen is a coastal city in Fujian province, historically known as Amoy. Emerging as one of southern China’s most sophisticated cities, hip boutique hotels and cafés line its long seaside promenades. Located about half-way between Shanghai and Hong Kong, the city has become an enticing spot for Chinese designers and creatives to settle and set up business.

With a population of around 4.5 million, Xiamen is anything but serene, but compared to life in Beijing, Guangzhou and Shanghai, it is unmistakably relaxed and the fashion scene much more intimate.

In an Accenture report on prosperous but liveable Chinese cities, Xiamen is ranked fourth as measured by indicators like economic development and infrastructure, which were then balanced with aspects of the quality of life, such as the urban environment and sustainability. The city is also known for its intellectual capital and technical readiness, ranking 9th nationwide, according to a 2015 report by PwC called “Chinese Cities of Opportunity.” 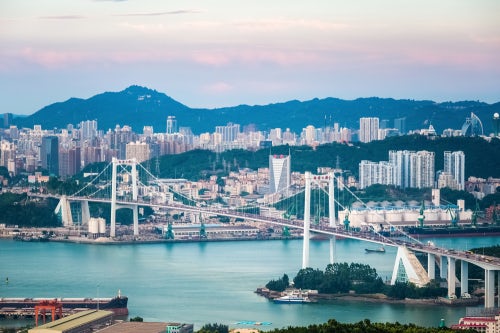 Today, as the local government seeks to restructure its economy and upgrade industries, fashion is becoming a big part of the municipal strategy. Xiamen now has its own fashion week and special funds have been set aside to support local colleges and universities with fashion and textiles courses.

“The Xiamen government even commissioned a short film about the city and sent it overseas to communicate [its image],” explains Shangguan, one of 260 designers who have settled in the recently established Longshan Cultural Creative Park, a government project that offers affordable studios for creative talent to rent. “The government’s support for independent designers has been very beneficial. Our office is more spacious and more stable than ever before.”

A 2015 LVMH Prize semi-finalist, Shangguan heads up a group of local designers, including Min Liu of Ms Min, Xiaolu Liu of Deepmoss and Yifang Wan, whose businesses are based in Xiamen. The latest addition is Vega Wang, who moved her studio from Beijing to Xiamen.

It is this congregation of fashion designers that led to the Chinese edition of the New York Times to compare Xiamen’s fashion circle to the Antwerp Six, naming them the “Xiamen Gang”, and to liken Xiamen’s role in China’s fashion landscape to Antwerp’s in Europe.

The stability and quality of life in Xiamen are important to me.

“Xiamen is a special place for the development of the Chinese fashion industry [and] having so many young designers gathering here is a wonderful phenomenon,” says Shangguan, although he does not agree with the Antwerp comparison since, unlike many of Antwerp’s designers who are educated locally, many of Xiamen’s current leading figures studied abroad.

Until recently, with the exception of the Xiamen Academy of Fine Arts and Xiamen Institute of Technology, schools offering a professional fashion design education were scarce, making it tough for local apparel brands to recruit. But this, too, is changing. Opposite Shangguan’s studio is a menswear factory that is rumoured to be the location for a Xiamen campus for one of the more prestigious fashion schools in the UK.

Instead of a singular education, he suggests that the “Xiamen phenomenon” is a result of China’s broader development in the global fashion industry. “In recent years, China’s fashion market has undergone tremendous changes, especially for independent designers. Several Chinese designers are now stocked at places like 10 Corso Como or Lane Crawford. A few years ago this would have been impossible to imagine,” he says. “But creativity in Xiamen is not confined to the field of fashion. There are many home furnishing and industrial designers who are here to create their own brand.”

“When moving back to China after graduation, I visited Beijing, Shanghai and even Shenzhen. But in the end, I chose to settle in Xiamen. The stability and quality of life are most important to me,” explains Yifang Wan, a Central Saint Martins graduate. Unlike London, “where it’s difficult to finish large orders,” factories in Xiamen are accustomed to large-scale production, she says.

Sourcing fabric and raw materials, however, proves to be a challenge. “It is not so abundant here,” says Wan, who now divides the work that goes into producing her ready-to-wear collections between her production team in Xiamen and a factory in neighbouring Zhejiang province. 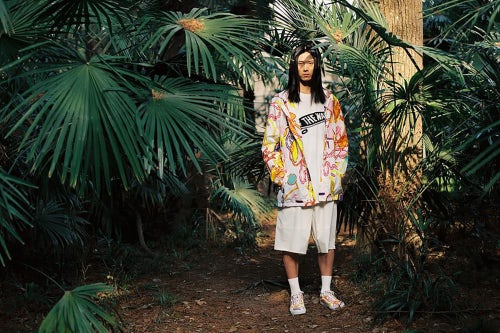 Xiaolu Liu, who launched the Deepmoss label after graduating from Central Saint Martins in 2012, designs garments that are crafted from exclusive Italian or Japanese fabrics.

“Many local factories in Xiamen are used to taking large orders, but they don’t have a habit of paying high attention to detail,” she says, stressing the importance of subtlety and a garment’s lifespan in her work.

While the dynamism of the “Xiamen fashion gang” has certainly made a big impression on Xiamen’s cultural economy, Shangguan says it remains a city where many of its older residents are not tapped into the rhythms of global fashion. But that hasn’t stopped him from making sharp socio-political and cultural observations through his fashion collections, which have included camouflage uniforms inspired by the 11th and 15th centuries religious wars of the Crusades and military robes based on Tibetan Buddhist cloaks.

Another member of the Xiamen gang is Liu Min, who launched her label Ms Min in 2010 after a stint working for Viktor & Rolf in Europe following her studies at London College of Fashion. A rising star since starting her collection out of her Xiamen home and selling them on e-commerce site Taobao, Min’s designs are not only popular in China but have gained global recognition after being presented at London Fashion Week. The 2016 LVMH Prize semi-finalist has since won the support of Lane Crawford in Hong Kong and United Arrows in Tokyo.

But what is it that makes this gang of creatives in Xiamen so different? According to Shangguan, it is their willingness to tap into both mainstream and obscure cultural references while taking advantage of the distance that the city affords. In his case, that often means a mash-up of Chinese youth subcultures — like the musicians who inspired and collaborated with him on one of his recent shows.

"They’re all very young, born in the mid 1990s,” he says. "Some are doing trap music; some are doing rap; others are working as producers. They began imitating the Atlanta rappers and now they use their own very local Chengdu or Chongqing dialects to rap. The flow is fantastic.”

And just like the members of the Xiamen fashion gang, “they’ve got their own value systems, a unique sense of style and their own powerful views on music and the world," he adds.