It was easy to get distracted by the catwalk spectacle at last month’s Seoul Fashion Week, but the city’s real stars are its retailers who keep young international designers afloat.

It was easy to get distracted by the catwalk spectacle at last month’s Seoul Fashion Week, but the city’s real stars are its retailers who keep young international designers afloat.

SEOUL, South Korea — Charles Jeffrey, the London designer whose star is on a precipitous rise, arrives at Boon the Shop in Seoul’s hilly Gangnam district. He’s here for a staff training, to be translated by buyer Munju Yeon, and he doesn’t disappoint with his painted Mozart face and tartan kilt, standing head-and-shoulders above everyone else in his stacked Loverboy platforms.

On the street and in the store, Seoul’s informed fashion consumers recognise him immediately. One is so shaken upon meeting him, he drops his shopping bags and screams. “I can’t believe I’m meeting Charles Jeffrey. What are you doing here?” A few minutes later, he explains breathlessly that he had an encounter with Jonathan Anderson nearby not long ago. The boy’s mother, an elegant woman in her early 50s, is dressed in clunky Balenciaga sneakers and a Vetements hoodie, standing by and taking photos.

Although Jeffrey’s highly visible persona is one of fashion’s most distinctive, the response from Seoul’s young luxury consumers is telling of the appetite for avant-garde fashion in South Korea. Increasingly, the market is becoming a lifeline for emerging designers from abroad and the Korean luxury retail scene, largely based in the Gangnam district, is a hotspot for international emerging designers and streetwear labels.

It is there that multi-brand boutiques such as 10 Corso Como, Boon the Shop, Space Mue, Addicted and Rare Market compete for exclusivity and fashion-forward VIP customers. It’s also where Louis Vuitton staged the pop-up for its Supreme collaboration last year, eager to capitalise on the neighbourhood’s reputation as a lodestone for young, wealthy fashion addicts. 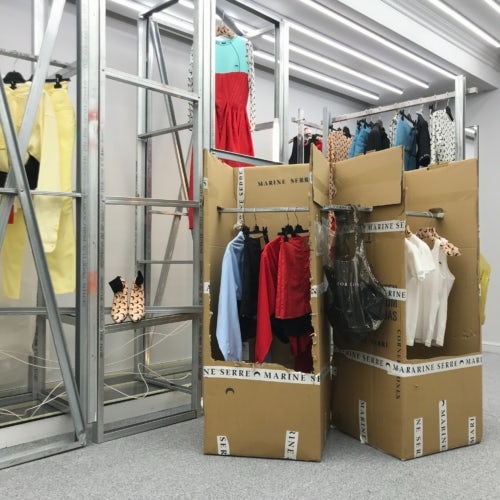 For Jeffrey, the Korean market now accounts for 25 percent of his business and he points out that deposits are always paid on time and in full by Korean stockists. As well as placing a £10,000 (about $13,981) order for Jeffrey’s sophomore collection, Boon the Shop assisted with VIP dressing, getting K-Pop singer Park Hyo-shin in one of Jeffrey’s shredded striped sweaters. “They’ve been hugely important for my business,” says Jeffrey. “They tend to buy the brighter pieces and it’s been an important validation for my business.” As a young designer, he’s not alone.

Punching above its weight

The country is now the second largest market for Vetements after the US. Last year, the brand launched an “Official Fake” collection in South Korea in partnership with MatchesFashion.com as a riposte to the knock-off culture there.

For some young brands, "Korea is now what Japan used to be in the ‘90s," Guram Gvasalia, chief executive of Vetements, told W last October. Citing the popularity of K-pop and the country’s geopolitical predicament due to its bellicose neighbour to the north, he ventured an explanation for the consumer mindset: “I feel like everything they do is about saying, ‘Look at us. We’re still here.’ It’s a shout out and attention-grabbing in a way that’s very interesting."

According to Jung Kuho, executive director of Seoul Fashion Week, the taste for luxury is slowly changing, with an increasing demand for alternatives to mainstream fashion houses. “When Vetements did a pop-up event here, it was two hours away from Seoul and everyone went to see it,” he points out. “There was no transportation, but everyone went there. It just shows that the rising fashion stars in Europe are all very big here.”

“We have a fashion scene which is a bit younger than the rest of the world,” adds Kuho. The latest Seoul Fashion Week wrapped up last month, with local brands like Blindness, Munn and Low Classics as clear highlights. “There’s also the Korean entertainment business, where there are a lot of young artists who are active in Korea and are followed by young consumers [at home and abroad].”

Many wholesale showrooms in Paris have come to rely heavily on Korean custom.

Part of South Korea’s success is that it has been popular with price-sensitive Chinese tourists, who have viewed Korea as a cool, hip place in terms of fashion, pop culture and music. However, recent strains with China and other factors have seen Chinese tourism flows gradually ebb. “Our store is focused on the domestic customer and the Chinese customer [only now] makes up about 10 percent of our business,” says Munju Yeon, buyer at Boon the Shop.

“Even our older customers are sick of mainstream designers and want something special,” she explains. Traditional luxury brands and bigger labels still account for 70 percent of the business, says Yeon, but emerging designers — some of which include Molly Goddard, Charles Jeffrey Loverboy, Roberts Wood, Shrimps, Wales Bonner and Eckhaus Latta — account for a full 30 percent of the shop’s ready-to-wear business.

Many wholesale showrooms in Paris have come to rely heavily on Korean custom. Paul-Anthony Smith, founder and director of the Awaykin showroom in London and Paris, says that Korea is a significant market due to its tendency for consumers to experiment. Korean stockists can often constitute a full 10 to 20 percent of sales revenue for his brands, which include London labels such as Shrimps, Ashley Williams, Bruta and Daniel W Fletcher.

“They are early adopters of brands always looking for newness and fresh product,” says Smith. “They are adventurous with their buy and often one of the first in the Asian region to pick up on a trend or brand. It’s not as big as Japan but a key territory to nurture within that region and it’s growing season upon season.” 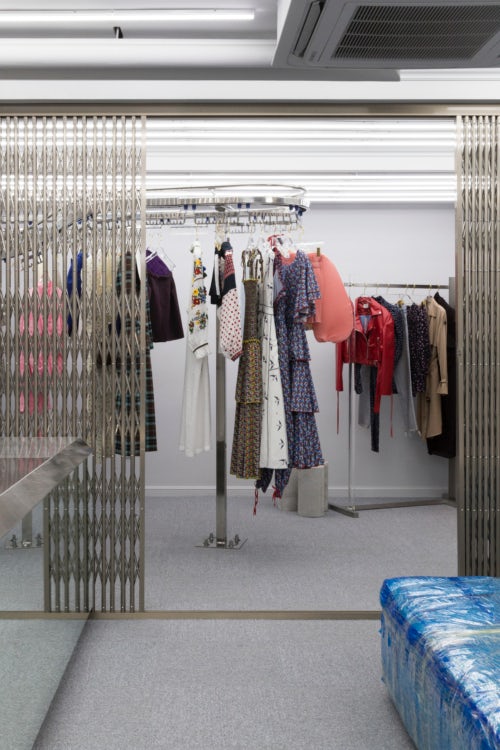 “Korea is one of our fastest growing in the Asia Pacific region,” says Lisa Aiken, Net-a-Porter’s retail fashion director, who was one of 200 buyers from abroad present at Seoul Fashion Week. “It’s a very fashion-forward market and our Korean customers have a directional point of view,” she adds. “Whether they’re buying into emerging brands from the US and UK or their own homegrown brands, we find they readily embrace an avant-garde streetwear aesthetic compared to customers elsewhere.”

Samuel Ross, the designer behind A-Cold-Wall, which is a finalist for the 2018 LVMH Prize, says that the Korean market represents a third of his direct-to-consumer e-commerce business but less for wholesale. “Korea has become one of the key markets in Asia for us and they [are] more accepting of experimental ideas,” he says. A-Cold-Wall is currently stocked in Space Mue and Addicted, and has more Korean opportunities on the horizon this year.

Another emerging brand that ranks Korean retailers high in its global distribution leader board is Eckhaus Latta, the New York-LA label that is also a finalist for this year’s LVMH Prize.

“Our Korean accounts tend to buy a whole vision of a collection, which is rather exciting because we really like to have our ideas sit together,” says Mike Eckhaus one half of the design duo that includes Zoe Latta. ““We develop the collections that way, so when they’re represented to the customer in such a fashion, we really appreciate it.”

The label is currently stocked in most of Seoul’s concept spaces, including Boon the Shop, Rare Market, Beaker, Han Style, Addicted and Amoneto.

Challenges beneath the surface

The Korean market for designer apparel and accessories is approximately worth $5 billion and growing 7.2 percent on average each year, according to Euromonitor. But despite the big appetite for international fashion in Korea, the wider fashion industry in Korea is struggling due to slow economic recovery, according to Taeho Sim, partner at A.T. Kearney in Seoul.

“Concept stores [here] are also experiencing similar challenges, but are responding by offering more unique products,” says Sim, who notes collaborations with existing brands such as Converse and Gentle Monster as examples. Sim credits their experiential initiatives such as interesting cafes, galleries and exhibitions as one way they have been responding to these challenges.

Interestingly, Boon the Shop, Space Mue and 10 Corso Como are all owned and operated by chaebols, family-owned, multi-interest conglomerates such as Shinsegae, Hyundai and Samsung. Although their influence has begun to wane in recent years, the chaebols’ dominance is so extreme that they account for about 85 percent of GDP, although they employ only 13 percent of the workforce, according to statistics compiled by Euromonitor in 2017.

For some young brands, Korea is now what Japan used to be in the '90s.

Some sources say that the concept stores are often a marketing exercise for the larger chaebols that own them, whereas others believe that the reason why there is such apparent low footfall in those stores is because most of the business comes from VIP customers, who the stores cater to remotely.

Monica Kim, the Korean-American fashion news editor of American Vogue, is sceptical of just how much business is booming in Seoul’s concept stores. Neither the streets outside nor the shop floors are often swelling with shoppers. “I don’t know if the appetite for emerging designers is quite so powerful as one would think it is based on those shops.”

Kim also points out that there are high taxes on imported goods, which dramatically increase the retail price of international designers. “You could just buy it for less on any global e-commerce site.”

“Who is the customer at those shops?” asks Bom Lee, editor-in-chief of the Korean edition of Dazed & Confused. “I bet half of them are relations workers in the entertainment industry [and] K-Pop.”

Indeed, it doesn’t help that many of Korea’s favourite multi-brand retailers are still reluctant to fully embrace e-commerce or that they move too slowly for the hyper-connected online Korean consumer. One result has been that international e-tailers have been able to carve out a surprising market share. 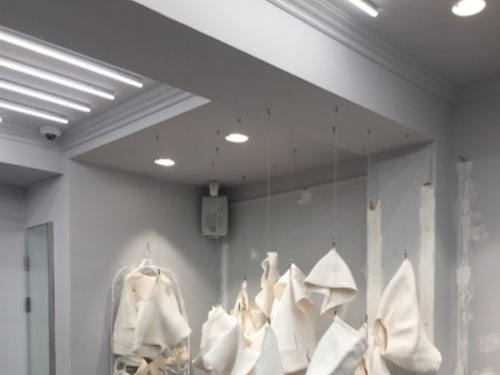 Another challenge they face is competition from Korea’s increasingly powerful “SPA brands” (local fast fashion rivals to the likes of H&M) and private label clothing made in the Dongdaemun garment district that ends up on cheap and cheerful but very on-trend e-commerce sites like Stylenanda or Imvely. Clothes like these tend to fit Koreans’ preferred silhouettes better than designer imports.

However, there is more than enough reason for Korea’s upmarket multi-brand stores to boast — and some certainly do. “Our customer is young and rich and very fashion-forward,” says Mo Kim, one of Rare Market’s three co-owners. The others are Jessica Jung and Dami Kwon, whose brother, G-Dragon, is one of Asia’s most influential style icons and a K-pop phenomenon.

The retailer is distinctive not only for its independence from the grip of the country’s chaebols, but also its seasonal re-fit — it currently has a launderette-inspired carousel rail — and a product selection of emerging international labels including Marine Serre, Paskal, Martine Rose, Katherine Mavridis and Marques Almeida. It is also where many of this year’s LVMH Prize nominees can be found.

What supplements the retailer’s emerging designers, however, is its private label, ‘We11 Done’, which accounts for almost half of the business. The collection sits separately to the multi-brand space in a glass box adjacent to the concrete store and is selling very well on Net-a-Porter.

What really stands out at Rare Market, though, is the space devoted to installations by the world’s emerging designers. New York-based designer Katherine Mavridis, who is only stocked at Dover Street Market so far, is given an entire corner for an installation. Ditto for Marine Serre, the Paris-based designer who scooped the LVMH Prize last year.

In a city like Seoul — where square footage certainly doesn’t come cheap — retail investment like this is as much about design devotion as it is about turning a profit.