The platform — meaning ‘strictly selected’ in Chinese — sells goods produced by international brands’ Chinese manufacturers stripped of their logos, claiming that items are of the same quality as branded originals.

Yanxuan is not alone. In recent years, a new wave of brand-less lifestyle stores have entered China’s market, stocking logo-free, wallet-friendly products allegedly straight from the same factories as their branded, world-renowned lookalikes. Xiaomi’s Youpin, Alibaba’s Taobao Xinxuan and JD.com’s Jingzao are just a few of the platforms launched by the country’s tech and retail behemoths following in Yanxuan’s footsteps. Similarly, Biyao offers luxury for less by allowing consumers to personalise brand-less goods to order.

Yanxuan was founded in 2016 by Chinese Internet giant NetEase, which also operates cross-border e-commerce platform Koala. By the third quarter of 2018, NetEase reported an accumulated revenue of $1.9 billion in its e-commerce operations, a 67.2 percent year-on-year boost. Last December, hoards of thrifty millennials lined up to enter Yanxuan’s first brick-and-mortar location at Hangzhou’s Jiebai shopping centre, and in January the company partnered with Asia’s largest health care and beauty chain Watsons to open a curated store in Guangzhou.

On Yanxuan, shoppers can find a logo-less version of Rimowa’s iconic 7,290 yuan (about $1,078) aluminium suitcase for 350 yuan ($51). Shearling boots “made by UGG’s manufacturer” sell for almost a quarter of the original $144 price tag. This was the message communicated in Yanxuan’s ad campaign posted on social media platform Weibo in January 2016. It read, “These are the same shoes we make for UGG” and “This is the same pillow we make for Muji” with photos of the Yanxuan and branded products side by side. 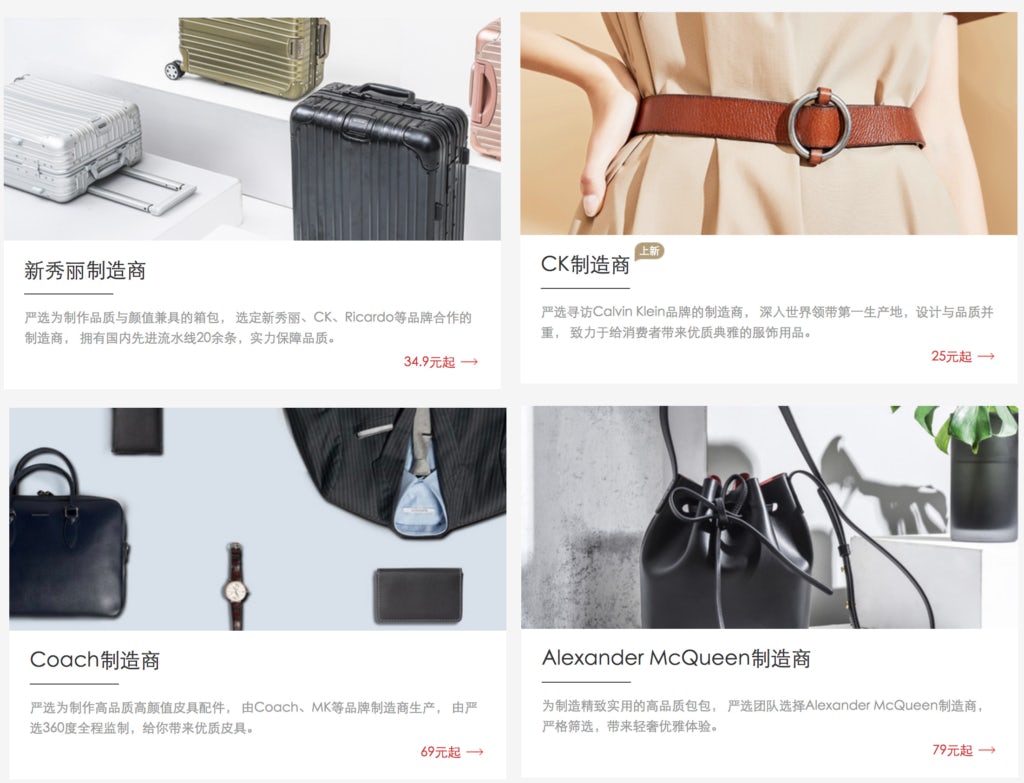 Backlash ensued. A top comment read “brands are expensive for a reason. You take the easy path, stealing their concepts and designs, but market yourself as having the same quality. Aren’t you ashamed?” Yanxuan subsequently apologised for its “insensitive behaviour,” and has since shifted gears to adopt a new, pro-Made in China marketing tactic, frequently posting factory visits on social media to showcase how products are made.

And though Yanxuan no longer compares the products side-by-side with their designer counterparts, the site still has a page linking through to goods  claimed to be “made by the manufacturers of” Calvin Klein, Coach, Samsonite, Armani, Michael Kors, Alexander McQueen, and Fendi eyewear.

As such, Yanxuan reaps the rewards of brand goodwill without spending a dime on research, development, design or marketing. “[But] these Chinese manufactures have top-class equipment and talents,” Yanxuan’s PR spokesperson told BoF. “We use phrases like ‘Ralph Lauren manufacturer’ only to introduce them to everybody.”

This approach is not to be confused with that of US-based members-only platform Italic, whose offerings from the factories of Prada and Burberry are unique and exclusive to the platform, avoiding the infringement of brands’ intellectual property (IP) rights. Instead, Yanxuan aims to provide the satisfaction of brands’ hero products on the cheap.

If Yanxuan existed in the UK or US, lawyers would be all over it like a rash.

“We hope consumers would clearly understand UGG is not in any partnership with Yanxuan,” an UGG spokeswoman told Forbes, and the American Apparel & Footwear Association has also expressed qualms about infringement of brands’ IP rights.

Rimowa did not respond to BoF’s request for comment at time of publication. Since then, the brand's chief executive Alexandre Arnault has reached out stating, "Rimowa takes great pride on its manufacturing heritage and expertise. All of our aluminum luggage is made in Germany, and our polycarbonate luggage is manufactured in Europe and Canada. We do not manufacture in China, nor have any third party manufacturers in the region."  As such, Yanxuan's Rimowa look-a-likes are merely counterfeits.

According to Jing Daily, as Yanxuan works with Original Design Manufacturers (ODMs) — where factories do varying levels of design work for brands — some manufacturers are capable of owning IP rights in the goods they produce.

“It all depends on the paperwork,” David Thompson, partner at Michelmores Solicitors tells BoF. “If you’ve got a registered trademark and factories are making references to working with these brands, agreements may or may not prohibit them from doing so depending on how they’re licensed.”

“If [Yanxuan] existed in the UK or US, lawyers would be all over it like a rash,” says Thompson. However, he stresses that such agreements can work in a brand’s favour. “Brands will always deal with overruns and can make a deal to control and understand what’s happening. If they have the right relationship, they might want to embrace it to get more visibility in the Chinese market.”

In 2010, McKinsey & Company noted a necessary component of Yanxuan’s success. “Chinese consumers remain brand-conscious but, unlike shoppers elsewhere, they focus on value so intensely that brand loyalty is often secondary.”

The company sells to an under-served market: China’s brand-loving but cash-strapped under-30s. According to big data firm Jiguang, over half of Yanxuan’s users are college-educated working millennials in first and second tier cities.

These consumers aren’t all big spenders; McKinsey & Company estimates affluent consumers, whose household income exceeds $34,000, to account for only two percent of the urban population. “The media makes it sound like we buy a Gucci bag a month,” says Stella Wang, a 26-year-old marketing associate living in Shanghai. “Most of my friends save up and think through our purchases really carefully.”

Armed with the slogan “a better life doesn't have to be costly,” Yanxuan’s success hinged on the appetites of China’s increasingly pragmatic and sophisticated consumers. Though China has its lion’s share of affordable, lookalike-filled C2C marketplaces such as Alibaba’s Taobao, they aren’t the sites shoppers frequent for quality buys. “I’ve bought cheap hair accessories and phone cases from Taobao,” says Wang. “But we know better than to shop there for clothes and accessories that will last a while.” 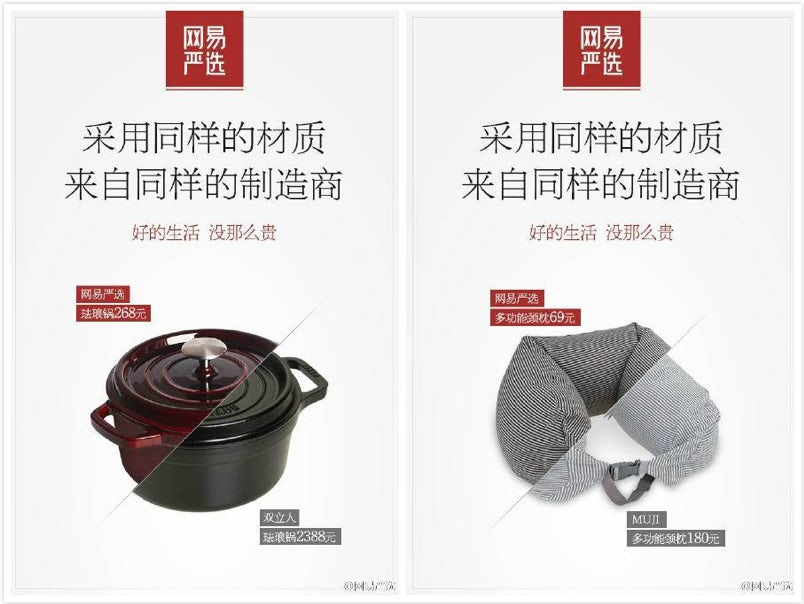 Yanxuan’s low prices can be traced to its removal of the brand premium, cleverly dubbed the “brand tax,” which has since become a buzzword. “Chinese online shoppers spend too much time qualifying products and pay too much for brand tax,” Yanxuan’s PR representative tells BoF. The platform’s homepage boasts, “from factory to consumers, we take the brand premium off.”

“Our pricing takes into account the production cost, a reasonable margin and shipping costs to lower the operation cost and benefit customers,” the representative told BoF. “We want our customers to immediately think of quality and value when they think of us.”

Although high value and low cost is Yanxuan’s USP, the platform’s user experience is what helped set it apart from the rest. Yanxuan’s sleek design and fewer offerings sets it apart from China’s other value-first discount platforms such as Taobao and Pinduoduo. Such sites, which value function over form, tend to bombard users with pop-ups, colourful banners and endless product pages. According to Taobao, its marketplace stocks "hundreds of millions of product and service listings."

“I prefer minimalist items but find Muji too pricey. There are so many products on Taobao that it makes your head spin, so Yanxuan is ideal,” remarks 27-year-old Chen Yongbo. According to 25-year-old customer Lin Xia, Yanxuan’s “Muji-like aesthetic” feels very refined. And aforementioned brand-less platforms launched by Alibaba, JD and Xiaomi have followed suit, adopting minimal, aesthetically pleasing storefronts to match.

Yet, Yanxuan still garners mixed reviews, according to a survey by CBN Weekly. “I bought Yanxuan’s Burberry-style bag, but was disappointed with the quality. I’d opt for trying out the products offline first, to make sure they live up to expectations,” said 28-year-old Beijing-based Zhao Ziqing.

A Rose by Any Other Name

Moving forward, what does Yanxuan’s rise mean for brand loyalty? As China’s economic slowdown continues, consumers are tightening their purse strings and the ‘value-first’ attitude shows no signs of waning.

“Brands that have developed a strong legitimacy due to their craftsmanship or creativity won’t be impacted,” Pablo Mauron, partner of Digital Luxury Group, told BoF. “But labels that have been pulling customers based solely on the draw of its brand name might find the road ahead to be more of a challenge.”

The platform’s rise hasn’t disrupted the prestige that real branded goods possess — according to a recent survey of affluent shoppers by CSG research and PR agency Ruder Finn, 46 percent of Chinese respondents plan on spending more on luxury in 2019 than the year before. Even so, luxury players should focus on creating stronger connection and experience, says Nick Withycombe, Reuter Communications’ director of content — elements that aren’t easily replaceable by platforms like Yanxuan.

In offering shoppers the look and feel of branded products — while opting out of the heavy-lifting that stems from the research, development, design and marketing expenses of original products — Yanxuan has discovered a shortcut to success in China’s e-commerce ecosystem. And love or hate them, China’s brand-less players are here to stay.

Editor's Note: This article was updated on 1 February 2019 to reflect a statement from Rimowa chief executive Alexandre Arnault clarifying that the company does not manufacture in China or have any third-party suppliers in the country.

A Turning Point for China’s Stance on Counterfeit Luxury Goods