'Influencer cities' from Chongqing to Wuhan are favourites for content creators and their followers, but there’s more at play beyond the geotags.

'Influencer cities' from Chongqing to Wuhan are favourites for content creators and their followers, but there’s more at play beyond the geotags.

SHANGHAI, China — Earlier this month, an interview featuring Wang Yuan of Chinese boy band TFBoys was posted on social media platform Weibo, where the Chopard and L’Oréal ambassador described the newfound popularity of his hometown, Chongqing.

“Now that it’s become an influencer city, people travel there to take photos for social media — it makes me proud that everyone is getting to know our local culture,” said the teen heartthrob.

Wanghong chengshi, or “influencer city,” is one of the newer terms to enter the mainland’s digital lexicon and be adopted by celebrities and travel agencies alike. Used to label photogenic metropolises, the term can also be taken literally as municipalities becoming social media stars in their own right. For brands and marketers, the term identifies up-and-coming, highly photogenic consumer metropolises beyond the well-trodden hubs of Shanghai and Beijing. On a wider scale, it points to a sea change in China’s social, retail and digital landscapes that will shape how players navigate and engage with shoppers in the world’s largest fashion market.

“Influencer city” was coined to describe the places often mentioned on short video platform Douyin, said Ching Xie, a client partner at Shanghai-based digital marketing agency Red Ant. While a case can be made for any city, certain hubs are on everyone’s lips thanks to an accumulation of social media buzz from restaurants, shops, tourist hot spots and exhibitions where users daka, or check in, on Douyin as well as platforms Weibo, WeChat and Xiaohongshu. 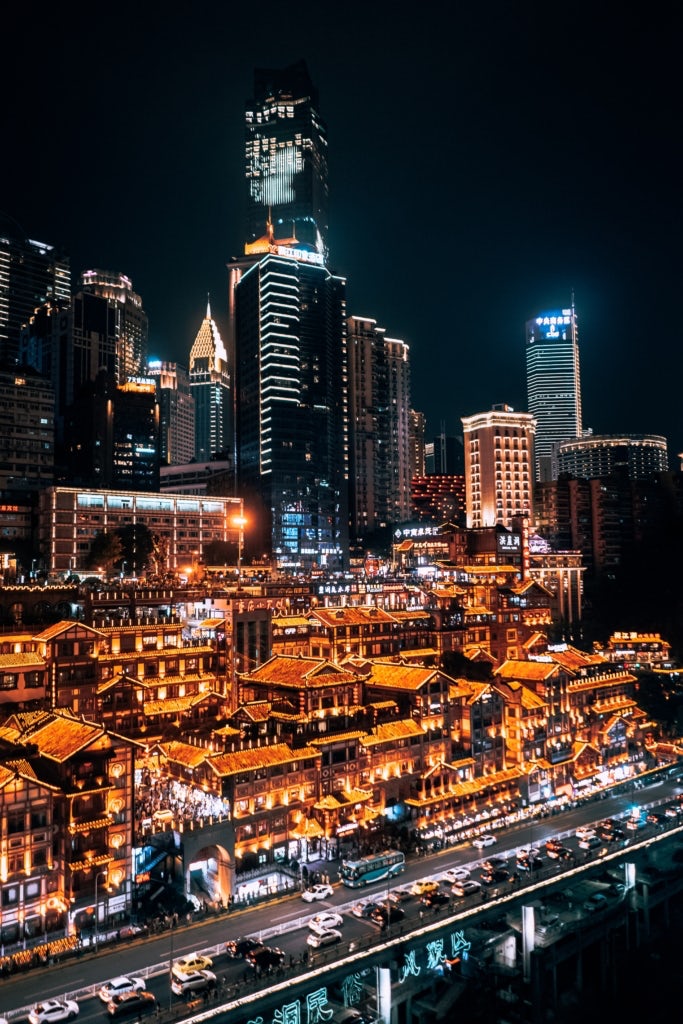 On social commerce platform Xiaohongshu (which brands from Chanel to Zara have adopted as a need-to-know digital channel), a search for “influencer city” returns tips on the best photo-taking spots around Changsha’s red lighthouse alongside must-try street food stalls in Nanjing. Shopping is a focal point: In Shenyang, users recommend Water Stone Laundry for its laundromat-inspired interiors and eccentric lifestyle brands, or Ewilling for its selection of Margiela Tabi boots and quirky art installations.

The phenomenon has spurred a surge in appreciation for content-friendly culture, said Tong. Everything from picturesque spots in Chongqing to the Sichuan province’s spice-heavy cuisine have become content fodder thanks to an influx of location-tagged photos, vlogs and livestreams. The trend has gained momentum on apps like Xiaohongshu, where a search for Chongqing’s riverside Hongyadong area (a dense mishmash of tourist-centric business known as the ‘city’s balcony’) returns around 20,000 entries (that's double the number of entries than a search for "Great Wall").

In October, a report from China’s Ministry of Culture and Tourism revealed that compared to “traditional tourist cities” Beijing and Shanghai, this year’s national holiday saw high demand for trips to Chengdu, Xi’an, and in particular Chongqing, which welcomed 38.9 million tourists during the week (7 million more than the city’s resident population). Considering that China — which McKinsey forecasts will make up almost two-thirds of global growth in luxury spending by 2025 — is seeing luxury shopping repatriated to domestic points of sale, brands’ physical retail strategies will increasingly focus on influencer cities.

But 'influencer cities' exist in a second, more literal sense. A growing number of Chinese youths are choosing to relocate to them, priming the cities to become sophisticated and diverse destinations for luxury, fashion and beauty brands.

Young professionals and recent graduates, drawn by Chongqing’s rap culture and Chengdu’s vibrant nightlife, are opting out of Beijing and Shanghai’s high living costs and work-centred lifestyles. Recent data from Beijing-based analytics MyCOS revealed that the number of college graduates opting for ‘new first-tier cities’ (such as Chengdu, Hangzhou, Wuhan and Shenyang) rose from 22 percent in 2014 to 26 percent in 2018.

Data from Douyin reveals that Chongqing, Xian and Chengdu were the app’s top three cities for video views last year.

McKinsey reports that fresh graduates, also known as ‘Post ‘90s,’ spend 25,000 yuan (around $3,567) a year on luxury goods — already as much as their Generation X parents — and it’s no secret that China’s luxury purchases are increasingly happening digitally.

In a country where brands lean on KOLs to drive sales, targeting cities where young, digitally-savvy shoppers reside is critical. Data from Douyin (where 85 percent of users are aged under 24) reveals that Chongqing, Xian and Chengdu were the app’s top three cities for video views last year. Plays in Chongqing hit 11.36 billion — 1.5 times of Beijing, which came fourth, followed by Shanghai.

“A city’s ‘influencerisation’ is both an opportunity and a challenge,” said Zhang Xuanyuan, the manager of Chongqing-based concept store SND.

SND opened its doors this year and drew visiting and local shoppers with its sculptural installation-like interiors and unique brand curation. Zhang adds that Chongqing’s diverse and open-minded culture has fostered a “unique, interesting and creative” approach to styling, which has popularised a blend of minimalist labels like Lemaire and Uma Wang with the daring urban aesthetics of Y/Project and Martine Rose. 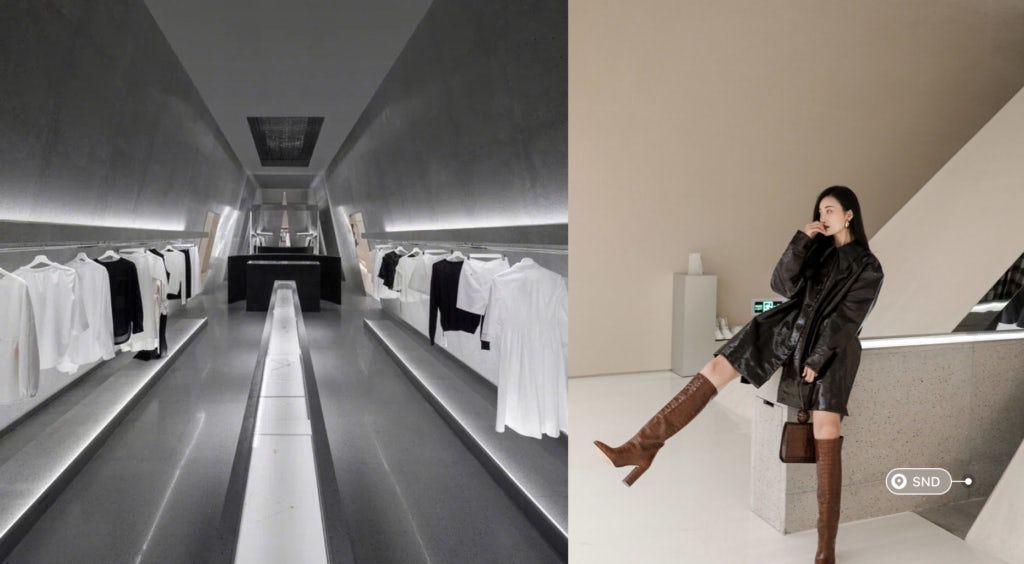 “The effect of KOLs on the retail scene can’t be ignored and Chongqing is no exception,” Zhang noted. “Chongqing consumers love emulating celebrities and KOLs’ outfits on social media, but they are very aware of what suits them and won’t blindly follow trends.”

'Influencer cities’ are also becoming finance, tech and retail hubs in their own rights. These cities are outliers from China’s fashion retail quadfecta of Shanghai, Beijing, Shenzhen and Guangzhou, their ascents dovetailing with broader investment and talent distribution across the mainland.

For years, global fashion players funnelled their retail and marketing efforts into first tier urban centres (new entrants to the exclusive club such as Wuhan and Chengdu have since been upgraded). Sophisticated infrastructure and commercial environments have traditionally driven quality talent to the likes of Shanghai and Beijing, making them forgiving entry points for foreign brands in the tricky Chinese market, said Tong.

The market has since become saturated, and companies have begun looking for new opportunities in second, third, even fourth tier cities, where McKinsey & Co. reports e-commerce spending has already caught up with top tier counterparts. According to QuestMobile, 670 million mobile internet users (more than half of China’s total) reside in cities tiered three and below, and 72 percent of these users are under the age of 35.

This ascent is mirrored in tech, which has long been tied to Shenzhen (also known as ‘China’s Silicon Valley’). Governments in Chengdu and Wuhan have poured millions into building technology parks and offering tax exemptions to giants considering open up offices in their cities. This year, Chengdu overtook Shenzhen as China’s best performing economy, according to an annual report by the Milken Institute.

The city’s government has embraced its influencer city status with open arms, partnering with the likes of Monocle Magazine and national business publication Yi Magazine. Just this month, Chengdu commissioned fashion photographer Chen Man to create a series of images, entitled 'This is Chengdu,' which were on display at its Sino-Ocean Taikoo Li retail development.

Though luxury players are widening their ambitions beyond holy grail cities (Gucci’s newest global pop-up concept has chosen Chengdu as its Chinese landing ground), zeroing in on these hubs in particular and tailoring strategies to visitors and residents could prove especially effective.

According to Savills’ 2019 China retail report, though Chengdu and Nanjing boast the same brands as Shanghai and Beijing (albeit with fewer points of sale), 40 percent of retailers tracked have yet to break into markets such as Xiamen and Ningbo.

Influencer cities are even proving attractive landing grounds for global brands to debut physical stores. The Savills report notes that Champion and Heron Preston chose to base their first standalone stores in Hangzhou and Xi’an respectively, which boast enthusiastic streetwear and skater communities.

Red Ant’s Ching suggests staging pop-ups themed according to a municipality’s locals, working with artists or musicians from the city and engaging with shoppers on an intimate level — Uniqlo, for example, translates campaigns into several dialects to tailor content to local demographics.

While the cities’ lower living costs mean higher disposable income for residents, McKinsey & Co. notes that younger consumers in smaller cities are price sensitive but less discount-driven. More so than counterparts in first and second tier cities, they look to social engagement (“in the form of referral programs...endorsement by [KOLs] and special edition products”) in addition an item’s price.

Moreover, the firm states that such consumers tend to leave work earlier but spend less time commuting compared to their peers in megacities — all factors that shape how a brand interacts with potential and loyal shoppers.

As is the case in a hyper-segmented market such as China’s, a city’s unique cultural identity should inform a company’s localised approach. Brands should research and identify the cities and customer segments they align with, test demand and create activations around a hub’s story and culture.