Made in Ethiopia: Fashion's Next Sourcing Hub?

Ethiopian manufacturers are becoming increasingly competitive and ambitious, but can East Africa really provide an affordable sourcing alternative to Asia?

Made in Ethiopia: Fashion's Next Sourcing Hub?

Ethiopian manufacturers are becoming increasingly competitive and ambitious, but can East Africa really provide an affordable sourcing alternative to Asia?

ADDIS ABABA, Ethiopia — All is not what it seems in the Ethiopian capital. Had you failed to notice the small huddle of men wearing hard hats discussing ‘lean manufacturing,’ you might have mistaken last month’s shoe factory tour for a religious festival.

Dressed in their finest Abyssinian gowns, a group of Ethiopian women greeted guests with rose petals as frankincense wafted through the air inside a building of immense proportions. Surrounded by local dignitaries in sharp suits watching the hostess perform an elegant coffee ritual, the delegation of casually-dressed Americans looked understandably self-conscious.

“Gosh,” one murmured to another, as he was given a slice of ceremonial himbasha bread. “Sure wasn’t expecting this.”

For Gashaw Debebe, chairman of the factory where the Americans were being entertained, this was an opportunity to pull out all the stops and show off his new 20,000-square-metre facility.

“When it’s completed in two months, it’s going to produce 10,000 pairs of shoes per day and 70 percent of that will be export,” declared Debebe, whose company Anbessa has manufactured shoes for the likes of J Crew and Harbor Footwear Group from its old premises in central Addis Ababa, Ethiopia.

“We’re investing now to improve quality and productivity. We’re also bringing in expats for expertise and to train staff about better compliance and all the new technology we’re bringing in.”

More than a bargain

The reason international production managers from brands including Calvin Klein, Aldo and Under Armour gathered last month in Addis Ababa was to attend a footwear business summit organised by Made by Ethiopia. Held in conjunction with Enterprise Partners and the Footwear Distributors and Retailers of America (FDRA), the summit also provided brand reps with a peek inside factories like Anbessa.

“Why are we here? Yes, Ethiopia can deliver a cheaper landed cost than key competitors like China, Vietnam and Indonesia. But we’re really here because Ethiopia is [getting] focused,” said Thomas Crockett, director of government and regulatory affairs at the FDRA, a trade association with 176 members that covers about 80 percent of the American footwear market.

Ethiopian fashion exporters have duty-free access to the US market thanks to AGOA, the African Growth and Opportunity Act, which was renewed by the American government last year for another decade.

“Some US shoe duties are astronomical so, with Ethiopia, we have nine more years of duty-free certainty ahead of us. That’s good news for companies and for consumers. Ethiopia is not for everybody but you do have a unique opportunity here to diversify your sourcing approach and explore worldwide capacity — which is essential to succeed nowadays,” Crockett added.

Fitsum Arega, director general of the Ethiopian Investment Commission, explained that the sector also enjoys duty-free entry into Canada and the European Union and preferential duty treatment to Japan and other countries. But this is not the only reason Ethiopia has become something of a hot topic in footwear sourcing circles.

As manufacturing wages rise in China and poor worker welfare standards continue to plague many lower cost Asian countries, many Western brands have started seeking alternative sourcing hubs. Africa is seen by some as the next frontier and, alongside more developed players like South Africa, Kenya and Mauritius, Ethiopia is considered one of the most promising and dynamic fashion manufacturing centres on the continent.

“As early as 2012, Origin Africa partnered with us here in Addis,” said Mahlet Teklemariam, founder of Hub of Africa Fashion Week. “The African Union supported us with the venue and last year around 150 fashion exhibitors participated in a sourcing trade show by ASFW, which has just partnered with Messe Frankfurt. They can bring in the big buyers.” 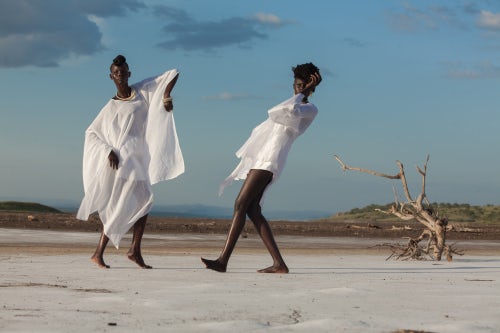 Much of Ethiopia’s own fashion industry is skewed toward the artisanal and hand-woven segment, which is why local brands like model Liya Kebede’s Lemlem and Genet Kebede’s Paradise Fashion will be less affected by developments in the southern city of Hawassa. An eco-industrial park has been built there to attract mostly foreign firms looking for large scale apparel production. H&M and PVH will reportedly start sourcing from there soon.

“I won’t go for that because the capital demand is too high and my hand weavers live in clusters around the more traditional textile centre of Arba Minch rather than Hawassa,” said Genet Kebede, who has been in business since 1992.

In a 2015 McKinsey & Company report on the East Africa apparel sourcing opportunity, 69 percent of chief purchasing officers surveyed rated the lack of raw materials as a challenge to doing business in Ethiopia. As a result of this and underdeveloped skills, buyers still tend to use the country for basic, large-volume items like t-shirts and blouses.

However, not all of these challenges are shared when sourcing shoes. In fact, Ethiopia has one important advantage when it comes to footwear. With one of the largest untapped livestock resources in the world and an ancient tanning industry skilled at turning cattle, sheep and goat hides into a variety of leather, there is no denying that the country is an attractive place to make shoes.

Ethiopian entrepreneur Bethlehem Tilahun Alemu spotted this opportunity earlier than most, having launched her fair trade shoe brand SoleRebels 10 years ago. Today it is exported to 45 countries including a network of her own boutiques spanning from Switzerland to Singapore. 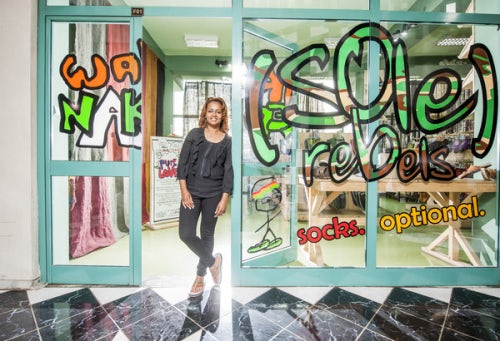 The newly formed Made by Ethiopia organisation, where she serves as chief executive, is also her brainchild. Explaining her motivations for the recent sourcing summit in Addis Ababa and why she now wants to help other producers around the country, Alemu said: “It took me a decade to employ 400 people but it shouldn’t have taken that long — and it wouldn’t have either if I’d had access to the right partners.”

“So Made by Ethiopia is here to provide Ethiopian factories with all the critical support they need. We’re a singular interface for factories and international buyers. That means production, supply chain, sales and marketing, operations and export management too,” she continued.

In light of recent growth and future projections by the Leather Industry Development Institute of Ethiopia (LIDI), the demand for such services can only grow. Shoe exports from the country have increased five-fold from 680,000 pairs five years ago to 3.54 million pairs today. According to Wondu Legesse, LIDI’s director general, that number should reach an impressive 75.2 million pairs by 2020, amounting to US $486 million in sales.

This may be a drop in the ocean compared to the number of shoes exported by China, which still dominates the market with around three quarters of the total global volume, and other sourcing countries like Vietnam, Italy and Indonesia. But Ethiopia has everything to play for to when reaching for the league below that.

“Ethiopia can definitely compete with Portugal, Spain, Romania or even Turkey,” says Juan Pérez Carpena, divisional vice president of footwear sourcing at Sears Holdings. “So I will probably do a test run here in Ethiopia but a very focused programme because I still have some concerns around speed to market, components and product development.”

As the second most populous nation in Africa, Ethiopia boasts a young, abundant and relatively well-educated workforce among its 100 million people. However, despite recent infrastructure highway upgrades and the new railway service to the Port of Djibouti, critics say logistics are still a challenge. Recent socio-political unrest in the Amhara and Oromia regions are also cause for concern.

Nevertheless, Ethiopia enjoys one of the highest levels of foreign investment in Africa thanks in part to its highly competitive (and sometimes controversially low) labour costs. Manufacturing wages can be just 10 percent of what they are in China, for example.

“Listen, the real Achilles heel when setting up manufacturing in Africa is affordable, reliable power. But Ethiopia has one of the cheapest electricity prices in the world due to having the largest hydroelectric power dam in Africa,” says Zemedeneh Negatu, managing partner of Ernst & Young Ethiopia.

Four years ago, this was the main incentive for businessmen like Zhang Huarong who moved some of his Huajian shoe factory operations from Dongguan, China to Ethiopia to produce for the likes of Guess, Tommy Hilfiger and Caleres.

Already one of the sector’s biggest employers, Zhang is about to build a $1 billion industrial city outside Addis Ababa that will serve as an Ethiopian supply chain cluster housing 20,000 workers, complete with schools, hospitals and hotels. About a quarter of Ethiopia’s medium to large shoe manufacturers are now foreign owned, principally Chinese, Taiwanese, Italian and Indian.

While critics contend that Ethiopia’s record on ethical sourcing is patchy, it is by most accounts improving and, according to some insiders, it is better than other popular sourcing countries.

“I’ve been sourcing shoes for the last 20 years, first from Korea then Taiwan to the Philippines and Indonesia. From what I’ve seen here so far at least, [Ethiopia] has better facilities and conditions than what we see today in many places like Cambodia and Bangladesh,” said Pérez Carpena, who sources shoes for Sears and Kmart.

According to the 2016 International Trade Union Confederation Global Rights Index, Ethiopia ranked in the third of five tiers, scoring worse than Latvia and South Africa but better than Mexico and Malaysia.

“Wages will go up here too as skill levels do. It’s all about balancing value with values,” said Mel Lewis, a footwear industry veteran who held senior roles at Converse and Avia before being poached by Made by Ethiopia earlier this year when he became their chief capacity officer.

“After Clay Jenkins of Caleres, I was one of the first Americans to see any of the factories here and, honestly, I was a little scared because sometimes it’s the pioneers who get shot by the arrows. But that hasn’t been the case at all so far with Ethiopia,” he said.

Since Made by Ethiopia is retained by the Ministry of Industry, factories in the network must abide by both government laws and the organisation’s own social and environmental compliance audits, which include many zero tolerance areas around labour and safety, he explained.

“We did a walk-through in March with the idea of using the FDRA code of conduct certification as a solution for the harmonisation of standards and to avoid audit fatigue of many companies auditing same factory. We’ve also been introducing Ethiopian factories to the Japanese ‘kaizen’ system to keep working spaces neat and safe.”

This has inspired producers like Yared Alemayehu Simegn, manager of Walia Leather, to invest more in advanced technology. “We can learn a lot from what happened in Brazil and Vietnam and other places. We can use automation and leapfrog some of the traditional manufacturing processes into automated processes,” he said.

As one of the worst environmental offenders in the fashion business, more of Ethiopia’s leather manufacturers will need to take a leaf out of the book of Hussein Feyssa, group operations manager of Hafde Tannery. “We’re focused on traceability and sustainable innovation such as chrome-free leather which we do for Edun and around 30 percent of our output is now vegetable [tanned] leather, mainly for Camper,” he contends.

But according to some buyers, this level diversification is not enough. “I’d start investing now in more non-leather shoe expertise,” cautioned Mark Hockett, Under Armour’s footwear sourcing country manager in Vietnam who says he came to Ethiopia on a fact-finding mission.

“It’s such a huge opportunity here but if you look at our brand, we’re performance shoes, so having a strong leather industry isn’t so relevant to us. For Ethiopia to compete globally in the footwear sourcing industry, they can’t forget about the full spectrum of materials for shoes including textiles.”

Disclosure: Robb Young travelled to Ethiopia as a guest of Made by Ethiopia.