Founders and executives from LVMH, Moda Operandi, Xiaohongshu, and Clot were among those who took to the stage during Shanghai Fashion Week.

Founders and executives from LVMH, Moda Operandi, Xiaohongshu, and Clot were among those who took to the stage during Shanghai Fashion Week.

SHANGHAI, China —  It is time to challenge the narrative used to describe China’s growing influence on the global stage. Most fashion leaders tend to focus on consumer spending power — and understandably so — but one often overlooked part of the story is China’s growing entrepreneurial prowess. Such was the message behind the third annual BoF China Summit, supported by the Savannah College of Art and Design (SCAD).

Yesterday’s event, which took place in Shanghai at HKRI Taikoo Hui, saw company founders and executives gather for a day of talks spanning luxury, streetwear, e-commerce, and the male beauty business. As speakers unpackaged the forces that constitute ‘Modern Entrepreneurship’, an audience of both local and global industry leaders sought valuable insight into the Chinese market at a time of uncertainty and economic slowdown.

Opening the summit, The Business of Fashion founder and CEO Imran Amed quashed old stereotypes of China as a nation of business imitators rather than innovators. “Some of the best Chinese start-ups and business minds are now innovating in ways that often outpace their rivals in the West,” he said. 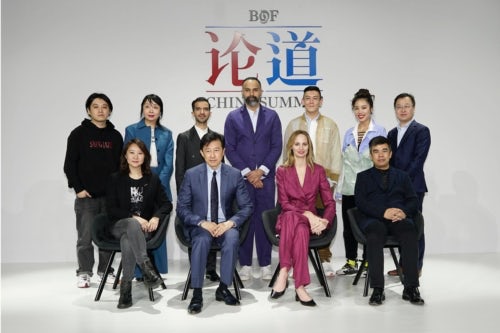 Indeed, entrepreneurship now bridges China and international markets in myriad ways, including cross-border designer collaborations, mergers and acquisitions, and the flows of data and venture capital.

Putting a Growth Plan into Action

Off the back of global investments totalling $290 million, including a recent $165 million injection co-led by Hong Kong-based C-Ventures backed by Adrian Cheng and Apax Digital, the luxury e-tailer is currently planning a major move into mainland China.

One of the benefits of Moda Operandi’s business model is that it gives designers a better understanding of how much inventory to produce and push out, explained Santo Domingo: “within seven minutes of a collection going down the runway we know the stand out colours, styles, shapes [and] regions [it’s suitable for].”

Technology has become the new air in China. You are breathing it. It becomes part of you.

The etailer’s newly appointed CEO Ganesh Srivats confirmed his strategy has been to “double-down” on the existing business strategy for online trunk show style sales, but also to better use the data this model provides in order to “predict what is going to sell 4-6 months from now,” said Srivats, who was poached by Santo Domingo last year from Elon Musk’s Tesla.

“[It] turns out we do have a crystal ball,” Srivats responded. “And we want to take that crystal ball and hand it back to designers. What do I produce and how much do I produce? For young designers it’s daunting. It’s expensive.”

Srivats sees Moda Operandi’s consumer insight helping Chinese designers become more efficient, something that is priceless in a market that is cost-conscious, even at the luxury end. 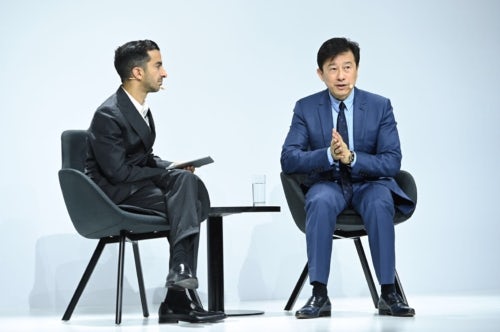 He also sees the company’s ability to divine consumers' different desires as a way to segment the massive China market. “The power of forecasting at Moda is immense,” he said. “With the data, we can know what Shanghai versus Beijing consumers want and forward positioned inventory that’s really relevant to the market.”

Srivats also said Moda Operandi would build its Chinese app and website “from the ground up”, rather than adapting their global offerings.

Santo Domingo, though, was cautious not to overstate the differences between China and other markets.

“The thing I realise about women as I travel around [and] interact with them, talking about uniqueness and breaking customers down into segments and generations, that’s great, but…we all have the same drives, the same fears, the same hopes,” she said. “We all love fashion for pretty much the same reason. Usually, the only things that change are the weather, where you live, and the way you interact with technology.”

The Power of Consumer Insight

“People have become acutely aware of air pollution, but technology has become the new air in China,” he said. “You are breathing it. It becomes part of you.”

East versus West is not liberating.

Wu, who was born in Shanghai and first joined LVMH in 1993, has witnessed more of the changes in the local fashion market than most. He described the work that brands did during the 1990s as merely “educational” in preparing the way for people born after 1980 to buy. Wu quoted writer Han Han as saying that the word ‘fashion’ didn’t even exist to him in Chinese until 2000.

But China’s post-80s generation came of age in the new millennium and have since “seen nothing but economic growth,” he said. Consequently, while China’s middle class of 120 million may look similar in size to the US or Japan, there’s one key difference: “The Chinese middle class is all very young, probably in their 20s or 30s, while the average age of the Japanese middle class is probably 65.”

Wu is bullish about opportunities in the Chinese market, despite the economic slowdown. Last year’s growth of 6.6 percent, he said, was “the slowest that we can remember, but the scale is so big. That 6.6 percent translates into the total GDP of Australia.”

Having established the magnitude of China’s continuing growth, the second session of the summit examined a segment outperforming many others: China’s so-called ‘He-conomy’, driven by increasingly enthusiastic male consumers who are boosting sales in the skincare, beauty and fashion categories.

Panel moderator Zhao Jia, executive editor of Chinese business media Yi Magazine said that by 2017 the male beauty industry in China was already worth 100 billion RMB (roughly $1.5 billion in US dollars), and would rise to about 154 billion this year, while the men’s fashion industry was worth 676.1 billion RMB in 2017 (roughly $100 billion in US dollars), and was growing at a rate of 13.1 percent.

Speaking to the speed of the segment’s growth, Gary Shi, general manager of brand accounts for the wildly popular social e-commerce app Xiaohongshu said, “over 20 percent of our users are now male. One year ago it was only 10 percent.”

Also known as Little Red Book, the company‘s impressive growth has attracted many brand partners such as L‘Oréal, Tom Ford Beauty, Tiffany & Co. and Guerlain. At the time of Xiaohongshu’s $300 million Alibaba-led Series D funding round in 2018, the start-up had an estimated valuation of over $3 billion.

It doesn’t matter where you’re from now. We all want to make money. Let’s make it together.

“Before we found it really hard to attract male users to use our app,” he said, citing the company’s registered user base of 200 million. “But some topics, previously thought to be attractive only to women are attracting men as well.”

Cai Chongda, chief executive of men’s fashion retail incubator Magmode, said he had also observed growth in men’s fashion brands in store. “Usually in department stores, male brands only take up 20 percent,” he said. “But now we can feel the potential in this market.”

That change is affecting how brands do business, Cai said. “In the past, we put male brands in with female brands on the second floor, because we wanted them to buy clothes together. Now guys buy guys’ stuff, girls buy girls’ stuff. Men want to see a bigger selection, not integrated with the girls.”

Wu Zhigang, founder and general manager of creative agency OIB China, which works with companies including P&G China, Shiseido and Johnson & Johnson, said there were three phases to men’s consumption of skincare and beauty products. First came Western brands like L’Oréal and Biotherm, then brands like JVR that took off on Tmall and finally brands like Martin shower gel, which became popular through online media. Next, he predicted, “the men’s beauty market will further segment to accommodate different hobbies and interests.”

While due deference had been given to the distinctiveness of the Chinese market in previous sessions, speakers in the last two sessions pushed back against the idea that China – and especially the younger generation of Chinese designers, influencers and consumers – exist in a microclimate impervious to global currents. 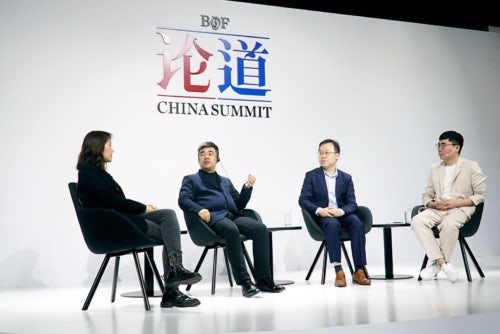 Edison Chen, actor, rapper-turned-entrepreneur and creative director of fashion label Clot, disputed the very notion of ‘national trends’, suggesting a fissure between the way many in the industry have traditionally understood China and a generation whose identities thoroughly transcend their Chineseness.

“Trends are trends. They’re not national, not divided by country,” he said. “You put out your best stuff, and if it’s good, it will be popular. You can’t claim it as a national trend [in or for] China. That’s not fair.”

Since it was established in 2003, Clot has become a leading brand for Hong Kong’s streetwear aficionados. The brand has collaborated with global names and artists such as Kanye West, Hiroshi Fujiwara’s Fragment, Converse, Nike and Adidas.

Chen’s sentiments were shared by Shanghai-based artist Ton Mak, who grew up between New Zealand, the UK and Hong Kong and has collaborated with brands including Nike, Vans and Swatch. Any framing of “East versus West is not liberating,” she said. In her collaborations with brands, she likewise sought to maximize her freedom. “I feel like Nike gives me a safe space to explore,” she said.

The entrepreneur behind Sankuanz, designer Shangguan Zhe, said he too had to grapple with a dichotomy that serves neither Chinese designers nor Chinese consumers. “One thing that made me a little bit anxious is that Chinese identity is different. We’re not from the centre of the fashion world. But then I thought, that logic doesn’t make sense. Why do we need to integrate with them?” he said. “Now I’m more at ease with being who I am.” 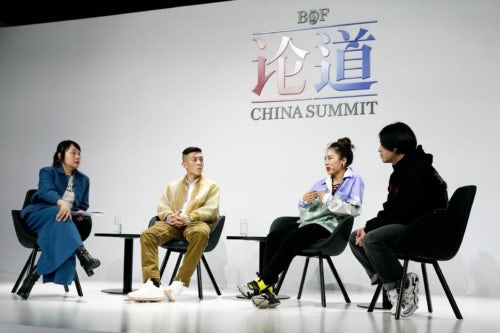 While the session had been framed to explore streetwear, that too was no longer a particularly meaningful category to the panellists. “If you called Clot a streetwear brand, I’d think it a bit strange,” Chen said. “I’ve studied fashion for over a decade – I think Sankuanz would agree – we’re doing fashion, not street fashion.”

Setting labels aside, Chen seemed pumped that BoF was in China trying to amplify the energy in the local fashion industry.

“I’m actually very happy that The Business of Fashion is here to try to promote local Chinese designers,” Chen said. “We need to nurture and give opportunities to more local creative people. In order for the industry to be recognized and survive to be part of the global economy we have to have people that matter in every area.”

“It doesn’t matter where you’re from now,” he continued. “We all want to make money. Let’s make it together. Let’s nurture the people in China that need more education, that need more exposure to new things, for them to understand what their dream is. It sounds weird, but I think a lot of them are lost. In order for them to succeed, they have to know that they can succeed; they have to have an example that they can follow, and they have to have some room to be able to learn.”

Re-emerging to wrap things up, Amed said, “I feel like Edison concluded the whole summit.” Chen raised a hand above his head to acknowledge Amed’s comment as he ducked off stage. 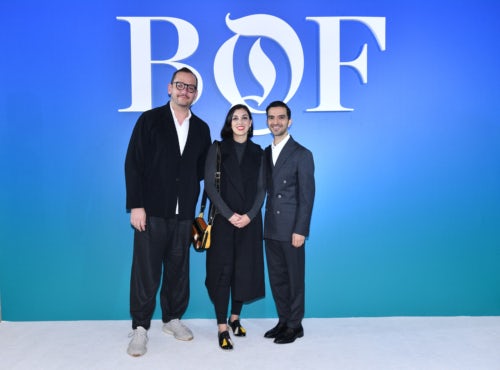 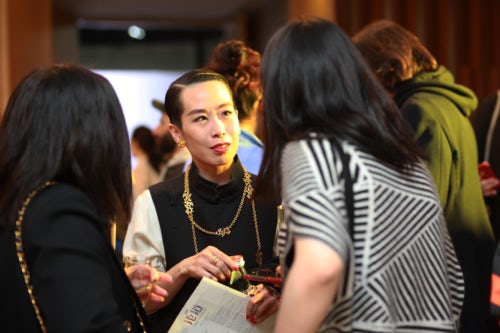 Guests at the BoF China Summit | Source: Getty Images for The Business of Fashion)