Tokyo Girls Collection is a shoppable mega-show so popular that it causes hysteria, but only a few brands outside Japan have tapped into this colossal direct-to-consumer opportunity.

Tokyo Girls Collection is a shoppable mega-show so popular that it causes hysteria, but only a few brands outside Japan have tapped into this colossal direct-to-consumer opportunity.

TOKYO, Japan — Japan's biggest fashion festival isn't Tokyo Fashion Week. This bit of trivia will be obvious to anyone spending this weekend at 8-storey Shin Kabukiza theatre with 30,000 mostly Japanese teenage girls and young women. The event being held — Tokyo Girls Collection (TGC) — is billed as a fashion show, but in reality, it bears only a passing resemblance to the runways of New York, Paris and even Tokyo.

For starters, the Autumn/Winter 2018 show is in fact a mega consumer show that features not just one brand but many. It includes labels like Punyus, the fashion line by Japan’s highest paid influencer Naomi Watanabe, as well as Evris, Gyda, Lagua Gem, Moussy and Snidel. While these might not mean much to outsiders, they are household names in Japan that offer affordable “real clothes” sold in Shibuya and Harajuku, Tokyo’s youth fashion hubs.  This is not to say that luxury or international brands have no place here. Saint Laurent, Fendi, Marc Jacobs, H&M and Topshop have showcased their collections at previous events.

For Yukiko Ikeda, operating officer and chief producer of W Tokyo, which organises TGC, the event’s selling point is its ability to draw together shoppers, influencers and celebrities to create what has become a hysteria-inducing spectacle that includes live music performances — this year from Japanese superstar Namie Amuro, top-charting K-pop band Twice and virtual influencers Hatsune Miku and Kizuna Ai — and over 30 booths set up by beauty brands like RMK and Kanebo-owned Coffret D'or, with enthusiastic representatives handing out free samples and discounts. “Tokyo Girls Collection is not just a fashion event,” she told BoF. “We are a hub.”

Since its launch in 2005, TGC has found its place at the centre of Japan’s gyaru culture (Japanese slang for 'gal' and an umbrella term for a popular style from the 1990s, who often sported brown hair, short skirts and European luxury handbags). Indeed, unlike conventional models walking on high-fashion runways, TGC features kawaii and peppy models such as Nicole Fujita, Natsumi Okamoto, Rio Uchida and Harumi Sato, who tend to grace the pages of Vivi, CanCam and other approachable Japanese fashion magazines that are not part of the upper echelon of the magazine market like Figaro, Vogue or Ginza.

“When TGC launched, it tapped into the fandoms that existed around these magazines,” said Dan Bailey, co-founder of the Japanese platform Tokyo Dandy. “Editorials [in these magazines] have always been very ‘catalogue’ in their style. No fantasy, just straight up clothes. TGC packages fashion in a similarly accessible way that they know their audience will literally buy into.”

“It's very commercial, mass oriented, personality driven and very fun. Tokyo Girls Collection has become a brand,” added Tiffany Godoy, a veteran of the Tokyo fashion scene and co-founder of the digitally native magazine, The Reality Show. While musicians like Rihanna and Big Bang have previously performed at TGC, Godoy noted it was homegrown acts that resonated more with the audience. “The crowd yelled even louder for local acts than for Jaden Smith, who was a guest at the last show, as they were not familiar with him.”

Anybody with a mobile phone can access TGC’s online shopping site and immediately buy an outfit the moment a model wears it onstage. TGC did not provide sales figures for the latest edition. But in 2011, it reported 50 million yen ($507,000) in sales within 24 hours of the show. In 2009, the figure was even higher. According to Ikeda, some outfits are gone even before the event is over. However, the e-commerce site is in Japanese and deliveries are limited to Japan. 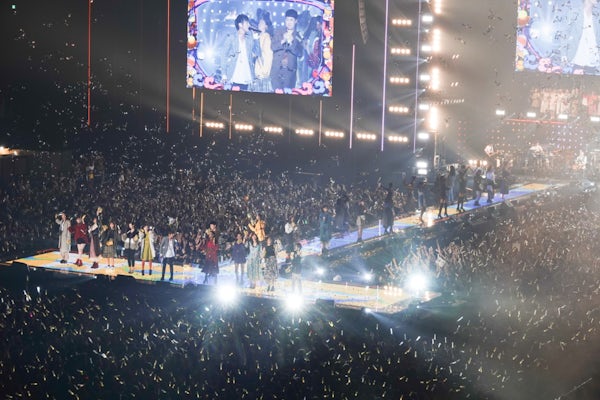 Not all brands have benefitted from the event. Popular Japanese clothing label Beams withdrew from the event “several years ago,” said a spokesperson for the brand. “When TGC first started, it was something totally new. For the first time, fashion fans could buy tickets to see runway shows and these shows were entirely shoppable from their mobile phones.” However, he said that the event was no longer a good fit, because “TGC’s organisers have changed multiple times and so have the event’s concepts and audience.”

Looking ahead, Ikeda’s ambition is to turn TGC into an even larger platform serving young women worldwide. Last year, W Tokyo announced a partnership with Chinese social media platform Weibo and the two are planning to launch an online shop this year and eventually host a TGC-branded event in China. In May, TGC held its show at the United Nations headquarters in New York. According to the executive, over 1.5 million people tuned in for the live broadcast and over 400,000 posts with the hashtag #TGC emerged online in one day.

But can she succeed? Outside of Japan, there are few mass events for consumers built around mass or luxury fashion. ComplexCon brings together the most prolific collaborators in streetwear, from Hiroshi Fujiwara to Adidas' Jon Wexler, although there is no runway element. Hypebeast’s first festival Hypefest, which launches in October in Brooklyn and will draw somewhere between 10,000 and 15,000 fans and dozens of brands and advertisers (the event will be ticketed and sponsored), could be a contender. There is also BeautyCon, the consumer-facing trade show for beauty obsessives in New York, which is geared towards women.

Bailey believes TGC is a good showcase for high-street brands. “The event presents clothes at affordable prices. This is in keeping with what their target demographic wants — easy-to-wear, on-trend pieces at a fast fashion price point.”

According to Godoy, one reason for TCG’s continued success is that it features strong personalities. “They are key to drawing in people," she said.

While the two events’ differ in terms of both purpose and business model — one is an elite B2B event for the fashion trade the other is a pay-for-entry B2C extravaganza — there were elements of TGC that Tokyo Fashion Week could learn from. “We have to include more edgy people and entertainment,” concedes Shinoda. “It will be a good energy [there]."