The pandemic set off an online shopping frenzy in what was already one of the world’s most digitally savvy countries. Here’s what brands need to know.

The pandemic set off an online shopping frenzy in what was already one of the world’s most digitally savvy countries. Here’s what brands need to know.

If one were to imagine an ideal environment in which fashion e-commerce could thrive, it would look a lot like South Korea.

“You’ve got a very geographically urbanised population of over 50 million and a highly digitised market, with one of the highest internet penetration [rates] in the world,” says Brice Dunlop, principal analyst at Fitch Solutions. “Combine that with very fast internet speeds and you’ve got a perfect market for e-commerce.”

For brands, Korea’s importance was underscored over the pandemic. At a time when many markets around the world were in serious trouble, Korean department store sales were growing at their fastest rate in 25 years and enthusiastic demand for luxury goods boosted Korea’s spot on global rankings.

Korean authorities avoided imposing a hard lockdown. Though physical retail took a soft hit, the crisis nonetheless propelled online sales to record highs. Korea is now the country with the second-highest proportion of e-commerce sales against overall sales, not far behind China, according to eMarketer. Nearly 30 percent of transactions are predicted to take place online this year while the US is expected to see just 15 percent, and the average among Western European economies is pegged at around 13 percent.

Another reason global brand executives now have an eye on Korea is the relative resilience of its economy. A recent Fitch Solutions report cites robust government subsidies and improving customer sentiment as factors that will drive Korea’s economy to a 2021 growth rate of 3.8 percent year-on-year, up from an estimated one percent contraction in 2020.

All this has amplified an already intense rivalry among Korea’s top e-tailers and those looking to catch up with them. “The competition in Korea’s e-commerce market has never been this fierce before,” says Kim Young-mi, an analyst at Euromonitor International.

The competition in Korea’s e-commerce market has never been this fierce before.

In a matter of months, e-commerce giant Coupang made a record-breaking $4.6 billion debut on the New York Stock Exchange and began its global expansion; tech giant Kakao acquired Croquis, the operator of fashion shopping platform ZigZag; and a partnership was forged between Shinsegae — partly through its subsidiary E-Mart, the country’s biggest bricks-and-mortar retailer — and tech firm Naver, leading up to the former reportedly winning the bid for an 80 percent stake of eBay Korea.

According to local media reports, the consortium led by E-Mart will acquire eBay Korea for 4 trillion won ($3.6 billion), a move that could give its parent — the department store giant and local distributor for brands like Celine and Dries van Noten — a significant edge against rivals, of which there are many.

For brands active in (or plotting their entrances into) the increasingly lucrative Korean market, choosing the right platform is key; understanding the industry’s idiosyncrasies, dynamics and shifts are imperative to doing so.

Among the country’s three largest players Coupang, Naver and eBay Korea, Coupang is in the lead, with an estimated 2020 market share of between 19 percent and 24.6 percent depending on the source of the analysis. Either way, it lags far behind Amazon’s share of the US market which is forecasted by eMarketer to hit 40.4 percent this year. “Most [leading Korean firms] control approximately 10 to 20 percent of the market,” Ng adds. Another point of difference with the US is that Korea’s e-commerce landscape is said to be miles ahead when it comes to logistics. An intense working culture has upped expectations when it comes to convenience. “It’s led to quite a bit of innovation ... you get a lot of same-day, [half-day] delivery,” says Dunlop. Customers are also accustomed to shopping late at night and receiving their packages first thing in the morning.

Like neighbouring e-commerce leader China, Korea’s online shopping landscape features multi-dimensional platforms like KakaoTalk, a messaging app-turned-super app not unlike Tencent’s WeChat. The dominance of such platforms and marketplaces makes direct-to-consumer sites and sales a tougher proposition for new players with low brand awareness. But in contrast with the Chinese mainland, niche digital marketplaces also have a role to play in Korea: while roughly two-thirds of online sales go towards big marketplaces, a third benefit online malls that focus on specific segments, says Dunlop.

“[This] all adds up to a considerable cost to the business in the short term,” says Kim. “Further consolidation ... is expected as many players will not be able to keep up with making such investments for a long time.”

The usual suspects of online luxury retail — Net-a-Porter, Farfetch, Matchesfashion, Mytheresa and the like — have for years been shipping to and catering to a growing clientele in Korea.

But the country’s homegrown e-tailers are gaining speed, particularly multi-category players operating in the mass market. Coupang and Naver grew rapidly last year, with revenues surging 91 percent and 22 percent respectively. “Coupang has differentiated itself from competitors with [its] same-day delivery service, while Naver benefits from a stable number of visitors every day, being the country’s most-used search platform,” said Kim.

Neither has won the fashion space though, having instead focused on groceries and home goods that were in high demand over the pandemic. Coupang and Naver didn’t respond to BoF’s requests for comment.

Alongside other digitally native, multi-category firms like eBay Korea (which owns local platforms Gmarket, G9 and Auction), CJMall and 11street, in the running are the online arms of Shinsegae and Lotte, known for their department stores and duty-free chains. Through its platform SI Village, Shinsegae has so far succeeded in amping up its premium e-commerce offering — after substantial investment, including acquiring fashion e-tailer W Concept in April — and will partner with Naver to launch a luxury e-commerce platform in the coming weeks.

Lotte lags behind Shinsegae; while the latter recorded a 37 percent GMV boost on its SSG.com platform last year, Lotte Shopping’s GMV increased 7 percent during the same period. In February, Lotte Shopping’s e-commerce head Cho Young-je stepped down in response to the firm’s digitisation struggles. Lotte did not respond to BoF’s request for comment. Other department store players have been slower to invest in their own e-commerce channels, or have partnered with e-tail leaders; Hyundai, for example, started selling on Coupang’s marketplace in 2019. 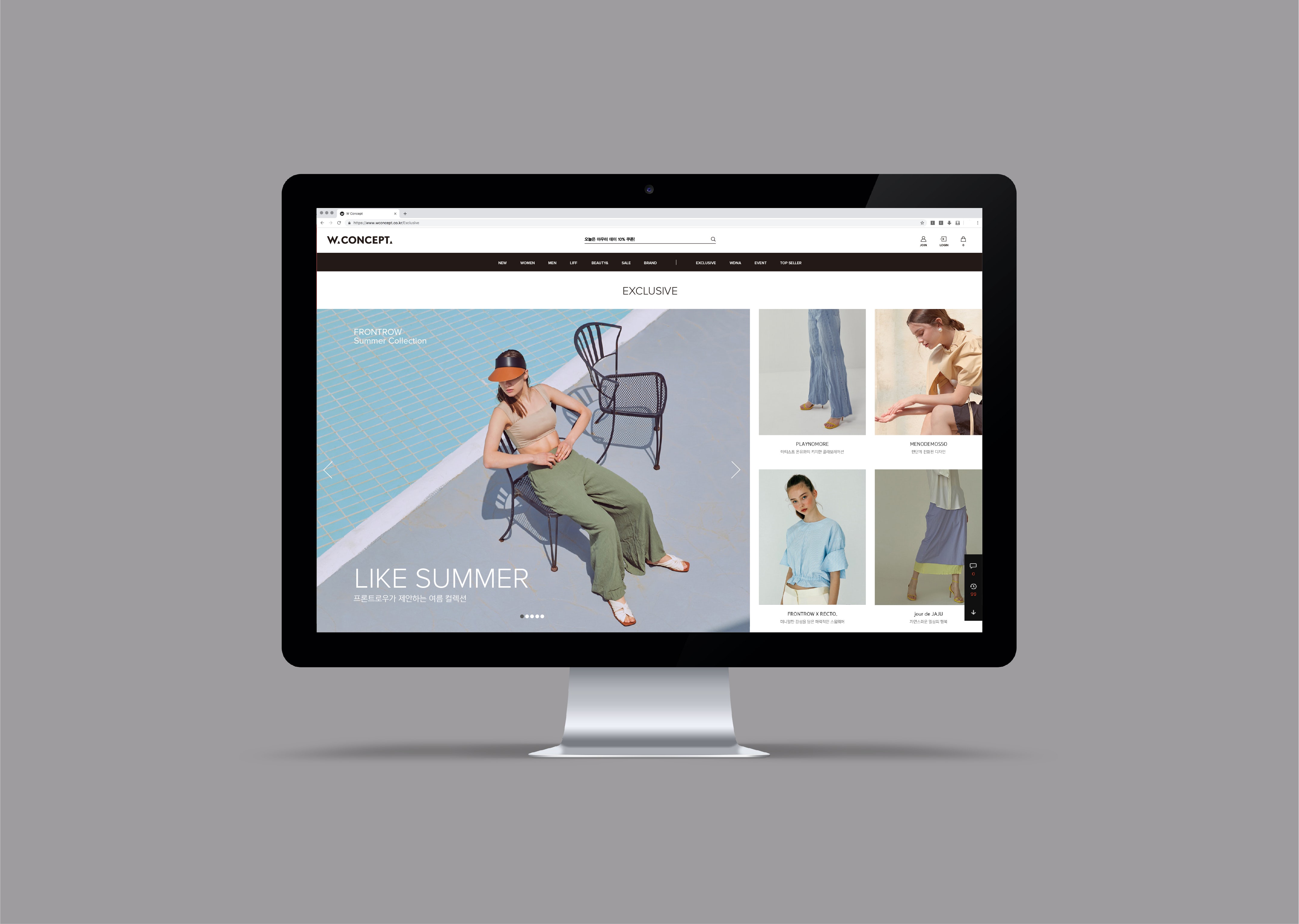 The Handsome and W Concept have built up lucrative cross-border businesses by catering to millennial and Gen Z shoppers in markets like the US, while Musinsa, which boasts 8.4 million users, acquired social media fashion app StyleShare and e-commerce platform 29CM in May — a move that signalled ambitions to capture bigger shares of both the menswear and womenswear markets.

According to a W Concept spokesperson, the e-tailer’s Korean business recorded 300 billion won ($270 million) in revenue last year, a more than 50 percent growth spurt from 2019, while total visitors increased by more than 30 percent year-on-year. The company is considering “various types of business partnerships” and plans on making use of parent Shinsegae’s infrastructure to expand its offline presence, improve logistics and improve data analytics across both platforms.

While Kakao, Shinsegae and Musinsa’s respective acquisitions of Zigzag, W Concept, Style Share and 29CM point to the price tech and retail players are paying for a bigger slice of Korea’s online fashion market, Shinsegae’s upcoming acquisition of eBay Korea could have bigger implications.

EBay Korea, which owns e-tailers GMarket, Auction and G9, is the country’s third largest e-commerce firm and makes up around 11 percent of eBay’s global business. Earlier this month, Shinsegae and Lotte Shopping submitted their bids for the company; other players reportedly dropped out. It was announced on June 22 that Naver, which previously said it would pursue the acquisition with ally Shinsegae, withdrew its bid for the stake.

An eBay Korea acquisition will give Shinsegae a “huge advantage,” said Ng, by allowing them to diversify their portfolios and tap into online distribution channels. Shinsegae didn’t respond to BoF’s request for comment.

In the long-term, Korea’s M&A rush could have several outcomes, says Ng. One would be a mega-deal akin to one that happened in Indonesia, where the recent merger between e-commerce marketplace Tokopedia and ride hailing, payments giant Gojek has resulted in a soon-to-be super app, GoTo. “We’d have an even bigger oligopoly player and the top firm would control a huge market share,” Ng adds. 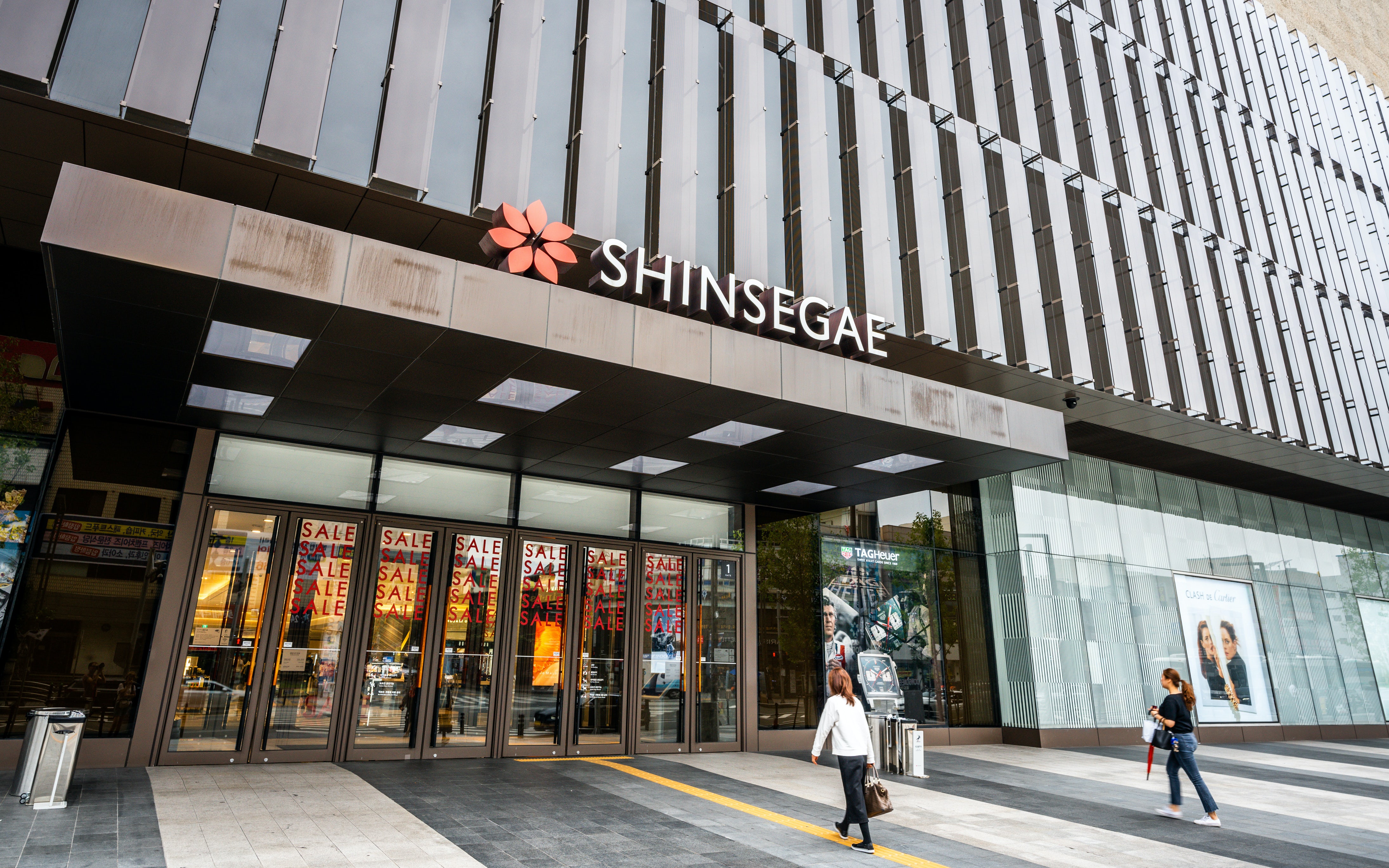 Outside a Shinsegae department store in Daegu, South Korea. Shutterstock.

Another outcome, resulting in two market leaders, would be similar to the case of Singapore, where Lazada and Shopee continue to battle it out for Southeast Asian dominance.

Either way, brands looking to sell to Korean shoppers need to find the right platform for their audience and positioning. New entrants with a value focus may opt for bigger platforms like Coupang “as they’re the ones dishing out incentives like discounts to fight for that piece of the pie,” says Ng. For established brands looking for a wider user base, Naver’s vast audience — a result of it being the country’s first web portal — could be a boon; brands with existing offline relationships with Shinsegae could choose to take that relationship online. Independent labels targeting younger shoppers would likely chime with The Handsome, Musinsa or W Concept.

And while e-tailers may incentivise brands to sell exclusively on their platforms, there isn’t a reason why brands can’t experiment with more than one option and see what works. Kim recommends brands analyse their target audiences and test the market offline before choosing a platform that will help build loyalty with the right shoppers.

“The Handsome, SI Village and SSF Shop’s customers may vary even though all three of them have similar positioning,” says Kim. “Understanding such differences is pivotal to staying ahead.”

What Retailers Can Learn from the World’s Savviest Online Shoppers