In battle-scarred Beirut, Sarah Beydoun of Sarah’s Bag has built an international accessories business built on unique bags handmade by former prostitutes and prisoners by putting her story second and fashion first.

BEIRUT, Lebanon — Wander down the right leafy side street in Achrafiyeh, Beirut, and you’ll find a classic Lebanese home, mosaic floors and stained glass windows gleaming in the sun. The ceilings are high, the air is cool, and all around you are bags in nearly every colour and craft, from crochet and embroidery to beading and leatherwork.

In the foyer, a Pop Art-inspired collection riffs on Lichtenstein’s thought-bubbled lovers with bright-coloured beads and silver fasteners. They lean in for a kiss on a canvas clutch, lips and lashes in red and black beads. Another bag offers an embroidered close-up from the same series, a bright-blue tear escaping from dark sunglasses. 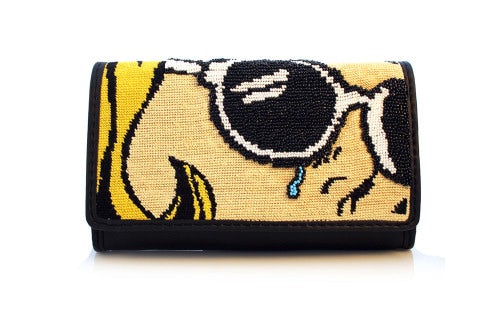 A clutch from the 2014 Pop Art collection | Source: Sarah's Bag

In another room, retro street scenes are embroidered on oval clutches with toy car clasps and the Six Million Dollar Man appears on a bright yellow leather wallet. Nearby, a triptych of Egyptian icon Umm Kulthum looks out from shoulder bags and clutches, all stitched by hand.

It’s the perfect space for a quintessentially sophisticated Beiruti fashion brand, but Sarah’s Bag didn’t begin as a brand at all. “Actually, this started as a social project,” says Sarah Beydoun, the company’s founder, creative director and sole owner.

Beydoun’s background is in sociology, not design. Her unorthodox journey to the atelier began in 1998, when she completed a master’s thesis on prostitution and began volunteering with former prostitutes and ex-convicts. Beydoun’s sheltered background fell away. “I couldn’t continue doing what I used to do,” she recalls. “When things like this cross your path, you can’t just walk away. I had to do something about it.” 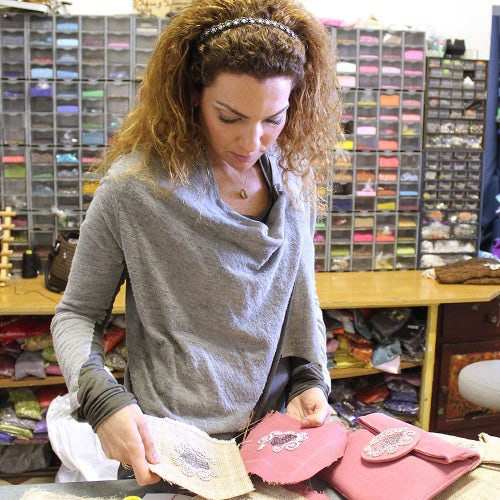 Dar Al Amal, the organisation Beydoun was working with, arranged for her to visit Baabda and Tripoli prisons to teach women new skills. In May 2000, Beydoun arrived with an armful of beads and a plan to make bracelets, which she would pay for on a per-piece basis. The results were “very mediocre.”

Beydoun’s breakthrough came when she beaded a piece of canvas and passed it to an artisan who made handbags. The finished product was something she’d wear herself. A workflow emerged: Beydoun would paint a pattern on canvas, pay prisoners to bead it, then send the beaded canvas to be turned into handbags.

The women loved the plan, especially the upfront payment they received regardless of whether Beydoun sold the item. But everything sold. “That first month, I was ecstatic,” says Beydoun. “I couldn’t sleep at night. I had found my vocation.”

Fourteen years on, Beydoun’s vocation and an initial investment of just $200 — on beads, paint and canvas — has grown into an internationally recognised fashion label. Sarah’s Bag exhibits at Paris’ prestigious Tranoi Femme tradeshow and the company’s bags and accessories sell at 50 points of sale in 22 countries. (Beydoun declined to disclose current revenue).

Despite the brand’s growth, just 300 bags are made each month, all crafted by hand. One hunded and fifty women — 40 percent of whom are in prison — bead, crochet and stitch the decorative elements, and seven artisans turn them into handbags. Prices range from $15 to $950, though most items are between $100 and $300.

On the day BoF visited the showroom, a customer called Sarah’s Bags “something special you’ll take care of and take pride in, but not so extravagant that you feel guilty buying it.” 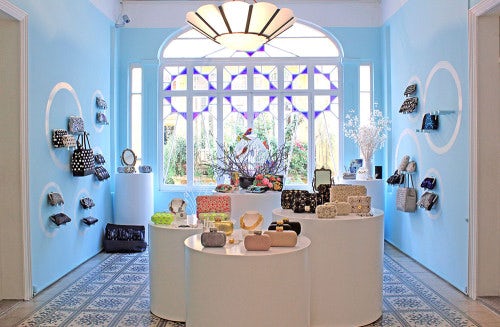 Natalie Kingham, buying director at Matches Fashion, which stocks the bags, has a similar take on why the brand resonates with women. “I was immediately attracted to Sarah’s use of colour and print, which felt witty and modern and really stood out. The bags have been selling well internationally and clients respond incredibly well as soon as they see them, I think because they feel original, fun and good value for the amount of craftsmanship.”

Although Sarah’s Bag was born a decade after Lebanon’s civil war ended, it is shaped by the political and cultural forces that keep the country unsettled, its people constantly improvising to find ways around political and economic challenges. Over a coffee in her studio, Beydoun explained how she has innovated, improvised and at times even felt like an imposter as she grew her business. She’s quick to point out that she is not a designer, several times disclaiming statements that way.

Such thinking persisted even after her first presentation — 100 bags all designed by Beydoun, showcased in a Beirut flower shop — sold out. She and her then-partner worried their success was down to their contacts and the exoticism of the bags’ provenance, rather than their design or quality level. For Beydoun, this was a turning point. “Our product had to be contemporary. The story is always going to be there, but it does not justify a mediocre end product. We wanted something hip and up to date, that people would buy whether they knew the story or not.”

By the summer of 2001, Sarah’s Bag had become a full-fledged company and a stream of glamorous Beirutis would troop through Beydoun’s parents’ war-damaged basement to collect made-to-order purses and clutches from her garage studio. Three years later, selling 60 bags a month, the brand moved into the showroom. At the same time, some of the company’s first workers were released from prison. And again, Beydoun’s underlying goal of helping women prompted a shift in the way the company worked: once out of prison, the best artisans became trainers, some even running their own ateliers.

“I think we peaked at 2004 to 2005,” says Beydoun. Lebanon felt stable and was drawing tourists from around the Arab world and beyond. “It was amazing, people would come to the store and at 11 o’clock, we wouldn’t have any bags left. Anything I would do, they would buy.”

Beydoun added clothing and accessories, all of which flew off the shelves. But in February 2005, Lebanon’s halcyon post-war era ended with the assassination of Prime Minister Rafic Hariri. The country struggled to maintain stability and, in the summer of 2006, it was plunged back into war.

Beydoun again flexed her business model around the immovable object of political and social upheaval. “Knowing I have 100 women working with me who don’t have work anymore, I started giving them big projects, like covers for beds, because they’d spend a month on the project and I only had to sell it to one person.” She also hit the road in the autumn of 2006 to reach the Arab customers who usually came to Beirut: “It was one way of branching out internationally.”

Between 2007 and 2009, Sarah’s Bag hired more internal staff and aligned around an official vision that put the women first. Production followed this: if the artisans the company contracted were especially good at crochet, Sarah’s Bags would feature crochet that season.

Paris was the next step and Sarah’s Bag first showed at Tranoi Femme in October 2009. “The first show was a slap in the face,” Beydoun says. Her priorities didn’t match those of the fashion world: no buyers seemed interested in the brand’s story — the thing that mattered most to her.

Again, she had to adapt. Sarah’s Bag went back to Paris in 2010 with a more coherent collection and Beydoun saved the story for after buyers had already fallen in love with the bags. “Paris didn’t become easier but we knew how to play it better.” She also found an agent who could navigate the Paris tradeshows and understood the brand’s vision.

Around this time, Beydoun started to use Beirut as a sandbox, prototyping for an audience that knew her and exporting her successes internationally. The strategy worked and her sales went from being 30 percent international in 2010 — the remaining 70 percent were sold at the Sarah’s Bag boutique in Beirut — to 90 percent international in 2014. Sarah’s Bag currently sells at stores across Europe, America, Asia, and the Middle East, from Hollywood to Cannes to Jeddah to Bangkok, as well as online.

All of Beydoun’s international sales are wholesale. And while evolving from a single boutique to a wholesaler cut into margins, it also enabled growth. Although plans for a rollout of Sarah’s Bag retail stores are underway — the first likely in Dubai — currently the only direct-to-consumer sales channels are the store in Achrafiyeh and the company’s website. “It’s part of us to adapt, but this was the hardest part of adapting. I lost contact with my clientele. Today, I think Instagram is my contact,” says Beydoun.

Flexing her business model through identity crises and national crises has allowed Beydoun to stay true to her vision. And despite the challenges of balancing product and story, Beydoun believes having a social component to her company is definite competitive edge that can incline customers towards a brand. The trick Sarah’s Bag pulled off was evolving from cause to legitimate fashion brand, and that was only ultimately possible by putting the story second and the fashion first.

In one of her newest markets, this approach is working. Kingham, of Matches Fashion, cites the social element as the “second great reason” to work with Beydoun. And the first? “We only buy great fashion product that is beautifully made — so this is first and foremost.”

Sara Elizabeth Williams is a freelance journalist based in Amman and focused on Jordan, Lebanon and Syria.