With a top-performing fashion retail sector, a dynamic mix of global cultures and government support, Dubai is attempting to assert itself as a genuine fashion capital.

With a top-performing fashion retail sector, a dynamic mix of global cultures and government support, Dubai is attempting to assert itself as a genuine fashion capital.

DUBAI, United Arab Emirates — You can now add Dubai to the growing list of cities vying for the status of global fashion capital. On Thursday evening, a parade of international fashion executives, editors and models partook in a fashion show-cum-photo op tour of Dubai Mall as part of Franca Sozzani's third annual Vogue Fashion Dubai Experience, a series of events bringing together international fashion figures and the local fashion community. This came in quick succession after the first-ever Dubai Design Week and Fashion Forward Dubai, a pioneering platform that enables fashion designers from the region to showcase their work and gain critical feedback from buyers and press.

Indeed, over the past week, meeting with people on the ground here, I sensed a palpable energy around this city-state's clearly stated goal to make fashion and design a key pillar of economic growth. In recent years, I have heard the same from local officials in Shanghai, São Paolo and Sydney. So what makes Dubai think it can become a global fashion capital?

Well, first, this is a city which has really only sprouted up from the desert in just over 40 years. This astonishing progress has given rise to already famous global landmarks including the Burj Khalifa (the tallest building in the world), the Dubai Mall (the world's largest shopping mall, measured on total area) and the Palm Jumeirah (a residential development, shaped like a palm tree and visible from space). Clearly, Dubai has no shortage of ambition, financial resources and executional skill to make big things happen. As one local cleverly put it to me, Dubai is a city of the future — the kind mankind might build if we were to colonise Mars. 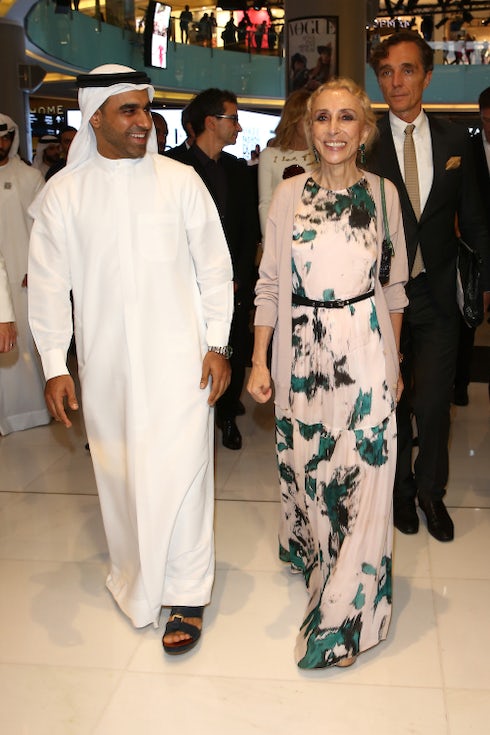 From a fashion industry perspective, Dubai has already become one of the top retail destinations in the world. Insiders here report that, although the big European luxury brands are not necessarily shouting about it, many of their top performing stores are in the Dubai Mall, which, in 2014, attracted a staggering 80 million visitors, a testament to Dubai's status as a global hub for people from all over Asia, Africa and the Middle East. And while, currently, retailers here are lamenting the precipitous decline of Russian tourist arrivals and flat revenues, year-on-year, there is also evidence that Dubai's fashion retail scene is very healthy indeed: more than 2,000 brands are on a waiting list for retail space in Dubai Mall, which is now being extended to accommodate 160 more stores.

But there are more than just retail initiatives on the cards. The newly established Dubai Design & Fashion Council — chaired by Dr. Amina Al Rustamani and backed by the powerful Dubai government — is building a roadmap for the creation of a complete fashion ecosystem, with an official fashion week, educational institutions and an entire real estate cluster — the Dubai Design District or D3 — to bring creative industries together. On a visit to D3 this week, enthusiastic officials painted a glowing picture of a future in which top global luxury brands, fashion start-ups and art and design students co-mingle in a district, like everything else in this city, created completely from scratch.

Still — fairly or unfairly — Dubai still has an image problem to overcome, what with its endless shopping malls and shocking conspicuous consumption, the kind that makes your stomach turn — multi-coloured Bentleys sitting outside chandeliered car parks, in front of countless hotels, restaurants and stores, all of which seem to have been imported from somewhere else. Why would anyone genuinely creative want to base themselves here when they could choose from any number of creative cities around the world with more authentic, home-grown, organic creative clusters?

Long-time locals say a genuine community of creative people has been germinating since the 2008 financial crisis emptied Dubai of financial professionals looking to make a fast buck. Indeed, perhaps the most surprising thing about Dubai is just how cosmopolitan and energetic the city feels.

So, yes, even if it at times it feels a bit like you're on a different planet, there is definitely something happening here in Dubai. Whether the stated aims of the DDFC are achievable remains to be seen, but with insiders openly whispering about the potential launch of Vogue Arabia in 2017, a fully-fledged fashion week on the cards (following a disastrous effort and subsequent retrenchment a few years ago) and young designers and global brands setting up shop here, they are certainly making a go of it.

It's not going to happen overnight, and possibly not as quickly as the 2020 target, just in time for the World Expo, but this city — and its people — have certainly captured my attention. My personal highlight of the week was meeting with the BoF community, after a wide-ranging talk about the growth of BoF and the current state of fashion at Fashion Forward Dubai. Afterwards, as people from Kazakhastan, Malaysia, Sri Lanka and scores of other places came to say hello, the exciting potential of the global mix of people here became clear. Perhaps this is Dubai's most valuable asset of all. I'll definitely be back to see how things are progressing.

You can watch my full talk at Fashion Forward Dubai in the video above, or click here to watch on YouTube.

Behind InStyle's Splashy New Red Carpet Awards
The celebrity-driven glossy is getting into the awards game with a new franchise trumpeting what it says it knows best: the red carpet. Will advertisers bite?

Breaking the Bill Blass Curse
The pioneering American brand is back with a new business model and a new creative director. Can Chris Benz succeed where so many others have failed?

Brazil’s Soap Stars Stir Passion for Fashion Brands
Love them or loathe them, Brazilian telenovelas are one of Latin America’s biggest marketing opportunities.

Taking Stock: Charlotte Stockdale's 20-Year Styling Career
The veteran stylist and fashion director tells BoF about the highs of being Karl’s right hand at Fendi, her need for autonomy, and pretending to work for Vogue Paris to get ahead.

Money Well Spent? Why Fashion Companies Spend Big on Lobbying Governments
Each year, fashion companies and organisations spend millions of dollars pushing their agenda by lobbying. Does it work?