HONG KONG, China — For decades, Hong Kong’s reign in Asia was unrivalled. Sitting on the Pearl River estuary, with a dazzling skyline and panoramic views, it was considered the New York of the East. A hub of finance, tech, manufacturing, design and trade, it has been a magnet for the world’s elite.

Historically, the flexibility enjoyed by Hong Kong as a British colony, like freedom of speech and press, helped it gain advantages in a range of sectors, including the fashion industry. But since the return of sovereignty to China 20 years ago, Asia has undergone dramatic changes and the Chinese mainland, in particular, has transformed into a global powerhouse.

"I think Hong Kong is basically trying to discover its position in terms of the new fashion landscape,” observes Shaway Yeh, group style director of Modern Media Group and a guest at Fashion Asia Hong Kong, a forum organised by the Hong Kong Design Centre, which ran during the latest Business of Design Week in December.

Featuring a range of local and international talent, from Vivienne Tam to Susie Bubble, the forum had big but blurred ambitions. “I didn’t quite understand the focus or the intention,” offers Yeh, continuing “but it’s a nice portfolio of speakers. It’s trying to address the big issues, yes, but what’s the point of view?”

During the city’s Business of Design Week, which featured over 70 speakers from 15 countries, Carrie Lam, chief executive of Hong Kong, announced her government will inject a further $1 billion into a fund to fast-track the creative industries. But with such ambitious financial support on the cards, why aren’t more Hong Kong designers breaking through?

Unpicking Hong Kong’s labyrinth of fashion initiatives and the complex structure of its events, as well as difficult positioning, could be part of the problem. Last September, when the fashion industry headed West for New York Fashion Week, Hong Kong was preparing for its own fashion week called Centrestage.

Organised by the Hong Kong Trade Development Council (HKTDC), it, along with nearly all of Hong Kong’s premier fashion events including Business of Design Week, is held at the sprawling Hong Kong Convention & Exhibition Centre. “We can handle scale, like the largest fairs in the world,” boasts Sophia Chong, assistant executive director of event organisers HKTDC. “But when we look at Centrestage, it’s a different matter.” 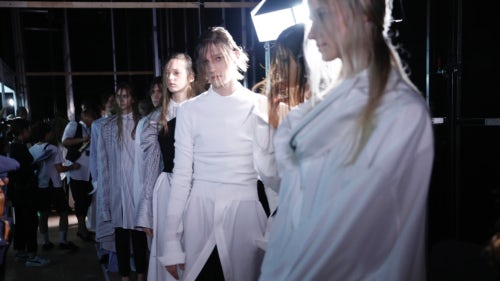 “We want it to grow in quality, not quantity, not exponential growth. We want a good curation of content so it will attract the right people to come. Buyers will see brands from both sides of the world, Chinese brands might come and get exposure westward as this is a two-way platform, but we still want to focus on Asian brands. Japan, Seoul, China — they all have their local buyers, but we want to act as a one-stop shop that is well-curated.”

Yet, with initiatives such as the recent China Day at New Work Fashion Week Men’s and last year’s Innersect event in Shanghai — where Edison Chen brought a slew of cool fashion brands and the likes of A$AP Rocky — the services offered by Hong Kong events like Centrestage can seem almost static in comparison.

“Right now, it is a very well meaning showcase that gives designers the opportunity to hone their skills in presenting and production,” says Simon Lock, chief executive of Ordre, an online luxury wholesale platform. “But does this event attract any meaningful buyers? No. Their opportunity has long gone, long gone. They should have been much more proactive 20 years ago in realising what the opportunity was. Now, Shanghai has it and well done to them.”

Erica Ng, senior editor of retail intelligence at WGSN Asia is well aware of the strides that other Asian countries are making. “It’s only a matter of time before Shanghai and China catches up,” she says. However, she is positive about her hometown. “I tend to think Hong Kong still has something going for it. It’s going to be a while before mainstream brands are thinking more deeply on the mainland about brand building. Hong Kong brands are aware of the power of brand-building.”

Taking part in the opening show at Centrestage, which featured 10 local designers, was menswear duo Ka Wa Key who have been cleverly building their brand through an experimental mix of installations and performances. “Hong Kong is definitely one of the more interesting cities for fashion retailing,” says co-founder Ka Wa Key Chow, whose brand moves between showing at London, Shanghai and New York.

With big box retailers and well-established niche boutiques, Hong Kong is essential for any fashion brand’s global wholesale and retail strategy. But retail sales are also critical for Hong Kong, accounting for an estimated 17 percent of the economy’s growth and about a tenth of its jobs. Consultancy firm PwC expects retail sales growth in the city to grow 4 to 6 percent in 2018 and to remain firm for several years after that, following a 1.9 percent rise in 2017 after two straight years of decline. However, some industry insiders feel that the city has lost its place at the top of the Asian pyramid when, in its heyday in the 1990s, Hong Kong stood firmly in second place behind Tokyo.

“I think 10 years ago when we talked about Asian fashion, fashion retailing here in Hong Kong was very strong. Lane Crawford, Joyce, I.T and others, they all had a lot of influence on the market,” says Tasha Liu, co-founder of Chinese retailer Dong Liang. [But] there is no denying that in the past five years, Shanghai Fashion Week has given more brands advantages. “Now, many fashion businesses and talents are moving into the Greater China market, so maybe Hong Kong is kind of losing its position. I don’t think it’s about the nationality; ultimately, it’s about the individualism of the design.”

Hong Kong’s importance as a tourist destination, especially for luxury retailers, has also been put in question in recent years, although visitors to Hong Kong from the Chinese mainland are rising again. Numbers increased 3.9 percent in 2017 after falling 6.7 percent in 2016. Total visitors also increased in 2017 after declining in 2015 and 2016.

Hong Kong should have been much more proactive 20 years ago in realising what the opportunity was.

Still, the scene in Shanghai is naturally expanding and trading on its newfound ‘cool’ factor. “Showrooms have now opened, selling Chinese designers. There is now the Mode trade show, people like Tranoi and Tomorrow Showroom are looking at going there and having a part of it, and buyers are going too. China is such a huge domestic market with new multi-label boutiques. The consumer market is becoming sophisticated and emerging designers like Angel Chen are quickly becoming local heroes. Shanghai has got it right and Hong Kong has lost it,” argues Kirsten Lock, fashion director at Ordre.

But not all agree with this assessment. Based between Shenzhen on the mainland, and Hong Kong, is duo Ffixxed Studios. Taking part at Centrestage, founder Kain Picken says, “there’s a unique relationship between Hong Kong and Shenzhen and we can capitalise on this.”

Shenzhen is a tech hub that is easily reachable from Hong Kong and is now home to the recently opened V&A-approved culture centre on on the waterfront in Shekou, a gentrifying port district in Shenzhen, as well as multiple creative zones across the city. “Everything is streamlined for foreign investment and foreign business here. Also, aside from the practical nuts and bolts, there’s still something very special about Hong Kong as a city. There’s a pace and a density to the city that you don’t see elsewhere,” explains Picken.

That is not all. Thanks to the legacy left by sourcing giants like Li & Fung and its competitors, Hong Kong remains one the world’s largest clothing exporters. The H&M Foundation recently initiated a partnership with the Hong Kong Research and Institute of Textiles and Apparel, Hong Kong’s renowned research facility. An estimated $6.8 million funding backs this collaboration and total investment in the project, due to run until 2020, is estimated to be over $35 million .

Hong Kong’s economy is forecast to grow by 3 percent in 2018, according to BMI Research, and while this is a downtick from previous forecasts, it remains strong compared to many Western economies.

As a leading financial hub for Asia with a familiar legal system, Hong Kong continues to be a favourite location for Asia-Pacific headquarters when fashion and luxury brands establish regional offices. And while its status as a gateway has been diminished due to the city’s rocky relationship with the Chinese government, Hong Kong is about to reclaim some of that back when the Hong Kong-Zhuhai-Macau bridge opens later this year. The 55-kilometre crossing will link Macau and Hong Kong with cities on the Chinese mainland. It is hoped that the increased connectivity will bring big economic benefits to Hong Kong. 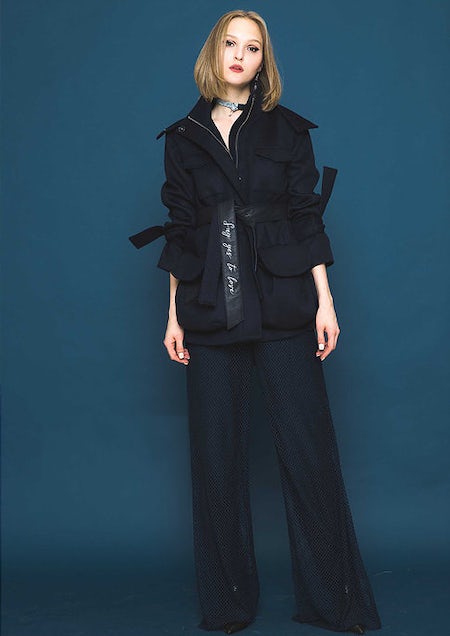 “In these recent years there has been a new will to improve things, plus an injection of money and new direction, but it takes time. We were going to move to Shanghai at one point, but now it really suits us to stay,” says Ffixxed co-founder Fiona Lau.

Hong Kong has overtaken Singapore to reach the top of the Heritage Foundation’s economic freedom rankings which looks at factors like corruption and mobility of labour. Mao Ji-Hong, the founder of Exception de Mixmind, a Chinese fashion brand that garnered attention after China's first lady wore a trench coat custom-made by the label, sits on the advisory board of the HKDTC advisory and agrees that the commercial procedures are clearer in Hong Kong, but believes that designers have better opportunities in China not least due to the size of the market.

“In Shanghai, for example, the atmosphere is forming, there are more local designers training outside of China. But as a hub, Hong Kong should explore more in Thailand, Vietnam and Japan to enhance its reputation in Asia,” he says.

Dong Liang’s Liu, who was also a judge at Centrestage, echoes these sentiments. “Hong Kong can have a great impact on Southeast Asia and is a hub for cities like India, Thailand and so on.”

While Lawrence Leung, HKTDC Garment Advisory Committee chairman, agrees that the parameters are shifting, he is optimistic. “Although there is little manufacturing in Hong Kong now, the brains are here. We have few restrictions to visit and easy access into China and Asia.”

Ordre’s Lock, who is also a Hong Kong resident, cites some of the globally renowned insiders from the city such as retailers like Hypebeast, photographers like Tim Wong, stylists like Declan Chan and bloggers like Tina Leung as key to keeping the cool factor alive in Hong Kong.

“There is an underbelly of movers and shakers, influencers who are often born in Hong Kong, but educated internationally, so they have a ‘glocal’ view on branding, somewhat different to their predecessors,” explains Lock. “Their influence is known to those embedded in the Asia-Pacific industry and they are now starting to go global too.”

Disclosure: Gemma A. Williams travelled to Hong Kong as a guest of the Hong Kong Trade Development Council.