SHANGHAI, China — Even on a muggy day, with intermittent smog in the air, a cluster of lycra-clad runners, sporting an array of wireless headphones and Fitbits, can be spotted stretching their hamstrings in Shanghai’s Century Park or jogging along the tracks and trails of the Olympic Forest Park in Beijing. Some are practising for a marathon; others are just in it for the exercise.

Across much of Asia — especially China, where pollution is dire and often hovers above levels where doctors discourage running or even going outside — running is not something most people have traditionally chosen to do in their leisure time. The joke is that when there's a person running in the city (and it's often a Westerner), people turn to see who's chasing him.

But thanks to government encouragement and a rising middle class with higher disposable incomes, who are taking up exercise as part of a healthier lifestyle — just like their western counterparts — running has become increasingly popular in China. In 2017, the Chinese Athletic Association (CAA) registered a total of 328 marathon events, with five million runners taking part, compared to the 22 races held only six years ago.

It’s a big shift from the days when most Chinese people were only exposed to running at school, where they take part in physical education classes or athletic drills. “Up until recently, running in China was not a ‘thing,’” chuckled Tim Hill of Hylink, the largest independent digital agency in China. Now that many Chinese runners are hitting the tracks, some of the world’s biggest sports giants are picking up on the trend.

Last month, Adidas hosted a four-week long running initiative with environmental non-profit organisation Parley for the Oceans. The event, aimed at raising awareness and funds to help fight marine plastic pollution, attracted 555,426 registered runners across China, who together covered almost 4.5 million kilometres. The outcome, said Gavin Lum, brand communications director of Adidas’ Running category, demonstrated the passion for running in China. “Running is a low-barrier and inclusive activity that is easy for everyone to get involved in. It is also a category which we see is experiencing exponential growth,” he told BoF.

Nike, meanwhile, launched a running campaign with advertising agency Wieden+Kennedy in March. Aimed at raising awareness of its Nike Epic React shoe in China, the brand hijacked the globe-shaped Metro City building in Shanghai, installing a 5-metre-tall invisible screen on top, which projected runners who were running on a treadmill or on the streets in real time. This included acclaimed sprinter Su Bingtian and Edison Chen, co-founder of streetwear brand Clot. In less than two hours, over 2 million people had seen the campaign online. According to a spokesperson from Nike, a key objective was to "inspire more runners to get out and get moving."

Greater China is the second-largest market for Nike, while Asia Pacific (which includes China) is the largest for Adidas. The brands together account for about a third of China’s sportswear sales.

However, future momentum for Nike and Adidas sales could also be dented by competition from players such as Under Armour (China makes up roughly half its total Asia Pacific sales, which were about $434 million in 2017.) In February, the sportswear brand launched a running shoe, UA Hovr, which includes new cushioning innovation. To promote the launch, Under Armour hosted experiential events across the world, including in Shanghai, which, according to Topher Gaylord, Under Armour's general manager for running, "proved to be the biggest turnout of any of our global stops." He said that the category is a "priority and growth driver" for Under Armour in China, where the brand will add more than 200 doors this year in over 60 cities.

Bragging about your latest run has become du jour on Chinese social media.

Consultancy firm Euromonitor forecasts the sportswear market in China to grow to $43.1 billion by 2020, surpassing luxury goods. Yet running as a segment in the whole sportswear industry is far from being fully developed in China.

There’s opportunity in it for brands. An average Chinese runner spends 3,601 yuan ($556) a year on their hobby, while experienced runners tend to spend more, averaging 4,594 yuan ($711), according to research firm Nielsen. At Li Ning, one of the largest sportswear companies in China, 26 percent of its revenue is generated in the running sector of the business, which significantly outperforms other categories. “We’re also seeing a shift where it’s not just sports brands taking part in running and fitness activities,” said Elijah Whaley, chief marketing officer at ParkLu, a KOL influencer marketing platform.

Earlier this year, Calvin Klein hosted an event in Shanghai for the launch of their new women's activewear line, Performance. The event was unlike any the brand had held before, having flown over fitness coaches from New York to meet with a handful of popular Chinese fashion and fitness KOLs including Sporty Bitch, Yuwei Zhangzou, Black Bab and Kiki Kang. According to ParkLu, Calvin Klein was mentioned 334k times that day on WeChat, a 1,427 percent increase. Meanwhile, the campaign’s hashtag #CalvinKleinPerformance generated 925k views the same day on Weibo. 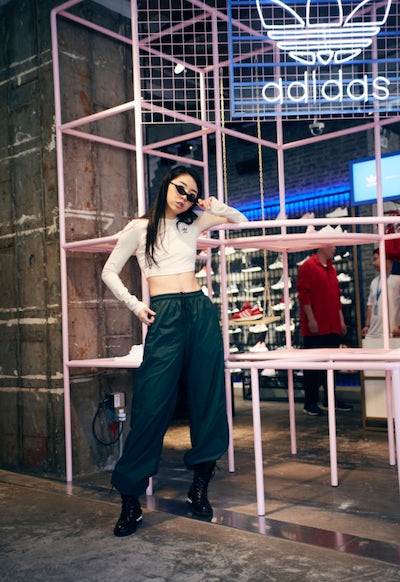 “Running has become a trend and going to different fitness classes has also become a very popular activity,” said Zhangzou, better known as Yuyu, who has over 1 million followers on Weibo and over 200,000 subscribers on WeChat. The influencer launched her channels in 2014 while living in France. (Her fluent French, English and Chinese has been significant in forging relationships with key luxury houses like Dior and Saint Laurent.) “I’ve also been working [on fitness and running related initiatives] with New Balance and Tory Burch Sport, which is launching in China very soon,” she told BoF.

Even beauty companies are getting in on the action. Estée Lauder previously teamed up with Beijing-based KOL Melilim Fu, who applied the brand’s high-performance makeup range (designed to be worn when working out) before going for a run and live streamed the entire experience on Yizhibo, the most popular livestreaming platform among Chinese consumers. This social aspect is important for many Chinese fitness enthusiasts and bragging about your latest run or marathon feat has become du jour on Chinese social media, as evidenced by the 100 million-plus views of posts with the hashtag #Wuxi and #marathon on Weibo on the day of this year’s race.

It has also led to the rise of several running groups. Codoon, which lets runners track their workouts as well as find a community of other runners, has recently gained popularity in China: it currently has more than 100,000 running groups in the country’s first- and second-tier cities. Adidas runners are invited to sign up and track their runs on Joyrun, while the Nike+ running club hosts daily events in Shanghai and is booked out days in advance.

“Like everything else in China, it starts with the government,” said Hill, referring to the Chinese party’s recent push on the country’s uptake of sports. Last year, the government launched a nationwide health and fitness campaign, with the goal of increasing output of the country’s fitness sector to more than 3 trillion yuan ($442.5 billion) by 2025. Some local governments are using races, especially televised ones, to promote tourism in their areas. According to Du Shaocai, vice chairman of the CAA, the group hopes to host “over 800 races by 2020, with more than 10 million participants.”

Whaley believes it’s possible. “You only need running shoes and you can go out there and do it. When it comes to health and fitness, which is on the rise in any industrialised country, it’s quite natural that it would be one of the first things that people would gravitate towards.”

Activewear Brands Limber Up in China