A bonanza awaits fashion entrepreneurs who can build bridges between India and Pakistan. But can business interests overcome a deeply troubled past?

KARACHI, Pakistan — Suspicion, tension and intermittent war. Such has been the unfortunate nature of relations between India and Pakistan since the bloody partition that carved them from the fading British Empire — and from each other — 68 years ago. But theirs is also a relationship punctuated by rare moments of kinship, of the kind that is practically inevitable for two neighbouring countries so different in some respects, yet so similar in others.

Although hostility may often prevail at a government level, businessmen and women on both sides of the divide have come to realise that these two nations, once united, can sometimes have remarkably similar consumer habits. Those working in the apparel trade understand this business opportunity better than most. After all, the fashion industries of both countries are built on the foundations of a joint costume history that has developed over many millennia across the Indian subcontinent.

In both India and Pakistan, silhouettes often mirror each other’s, while embellishment such as elaborate embroideries are widely appreciated. The Pakistani shalwar kameez is very similar to its Indian counterpart and while the sari may be more popularly worn in India, the garment also features frequently within Pakistan’s sartorial diaspora. At the same time, there are certain elements of dressing that are distinctive to one side or the other, making each country’s fashion exciting — but not overly foreign — to customers across the border. 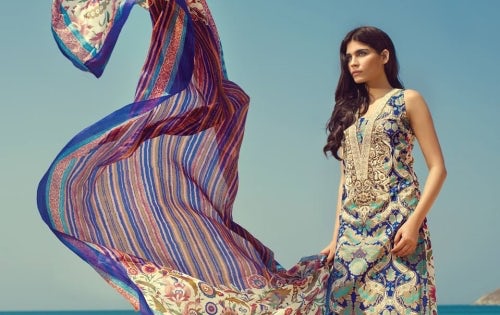 “I definitely see an avid interest in the Indian market for Pakistani fashion,” observes veteran Indian designer Tarun Tahiliani. “Up until a few years ago, Pakistani label Sana Safinaz was selling well at my multi-brand store Ensemble [in Mumbai and Delhi]. The tunics were very similar to our own Indian kurta but the blend of colour with print, lace and embellishment gave the clothes a unique vibe.”

Tahiliani also points to the crowds of Indians that were drawn to Pakistani fashion and textiles at an exhibition at Pragati Maidan in Delhi, organised by the Trade Development Authority Pakistan (TDAP). Ensemble Pakistan, a multi-label store unaffiliated with Tahiliani’s operation in India, participated in the fair.

Shehrnaz Hussain, the store’s creative director, recollects her experiences: “We stocked Pakistani ready-to-wear at the exhibit and a lot of [Indian] women asked us for certain outfits worn by Pakistani actresses in some television drama or the other. Pakistani television productions are huge hits in India and they, along with the far reaches of the Internet, have made Indian consumers very aware of what our fashion has to offer.”

A veritable scion of Bollywood fashion, designer Manish Malhotra also observes how orders once filtered in from Pakistan asking for replications of his creations for popular actresses like Priyanka Chopra.

In both countries, weddings are exorbitant, grand affairs that have given rise to a thriving bridal industry, and at a high-society wedding in Pakistan, it is not uncommon to see guests wearing creations by Indian designers like Manish Malhotra or Sabyasachi Mukherjee, which stand out due to their uniquely Indian colour palette and traditional embroideries.

Given such keen interest in cross-border fashion trends, Pakistani and Indian designers should — in theory, at least — be enjoying the profits of trading with consumers on either side of the frontier. But even the lure of certain profits has not been enough to persuade many to confront the cumbersome trade legislation, political uncertainties and a general sense of unease that comes with doing cross-border business in this part of the world.

The Carnival de Couture, a black-tie fashion extravaganza in Pakistan featuring designers from both countries, was hastily cancelled in 2008 due to the mistrust that followed the tragic terror attacks that struck Mumbai that year. The event took place in 2010, only to again fade away, crippled by logistical challenges and security concerns that made it risky for Indian designers to cross the border to participate. 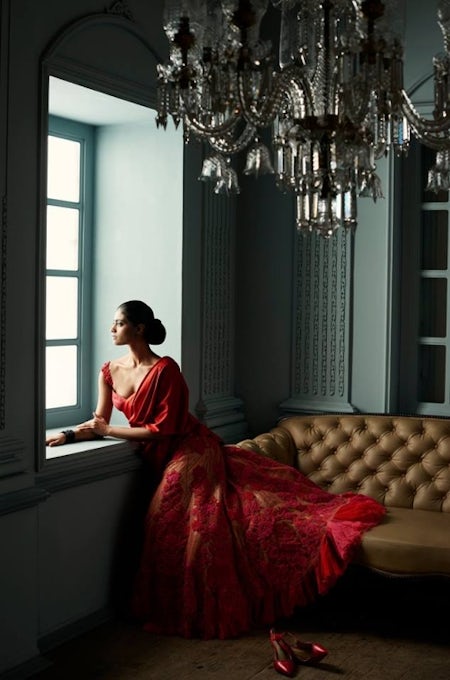 Last year's Lifestyle Pakistan exhibit in Delhi and the participation of Pakistani designers at India’s Lakme Fashion Week was preceded by protests from right-wing Indian nationalist party Shiv Sena. Business can also be hampered by the lengthy customs procedures and excessive red tape that plague entrepreneurs on both sides of the border.

“It’s definitely not easy,” admits Umair Tabani, chief executive officer at Sania Maskatiya, a Pakistani atelier that has been endeavouring to build its presence in India by participating in the Vogue Wedding Show in Delhi this year and in Lakme Fashion Week last year.

“We can’t carry direct financial transactions or open an account in India,” he explains. “When we send export garments, we have to create prototypes that are extensively tested before the shipment is allowed through. A number of Indian multi-labels like Ensemble and Ogaan do stock designs from Pakistan, but by the time taxes and duties are added to the selling price, the garment is too expensive compared to its Indian counterparts. Customers often lose interest in buying it.”

As a result, trade continues to yo-yo from the heights of the occasional sold-out trade show to the paltry lows of small-scale ‘suitcase exhibits’ where designers’ friends carry clothes across the border and a handful of orders are made at people’s homes.

According to a 2014 report, which estimates how the normalisation of trade relations could affect the economies of India and Pakistan, the authors estimated that the bilateral trade potential ($19.8 billion) between the countries is ten times larger than the actual volume of bilateral trade ($1.97 billion). Presented by the Indian Council for Research on International Economic Relations, the report suggested that the apparel sector, in particular, could benefit from the untapped cross-border opportunity, because textiles and fabrics account for a significant number of the “sensitive items” that do not enjoy free trade status under the terms of SAFTA (South Asian Free Trade Area), of which India and Pakistan are both members.

To complicate matters, Indian designers are less keen to explore the relatively nascent, smaller market across the border in Pakistan than the reverse. This is hardly surprising, however, as, according to the World Bank, India’s GDP is worth $2 trillion, about eight times more than Pakistan’s $246 billion. Measured by population estimates, India’s market size is about ten times bigger than Pakistan’s. “The Indian fashion industry is growing steadily and there is a large market to explore within the country itself,” explains Bandana Tewari, fashion features director at Vogue India.

“Every year, a series of incredibly promising young designers enter the fray while older brands continue to evolve. The Indian arena is getting increasingly competitive and most designers are currently more focused on gaining a stronghold locally as well as amongst the large number of Indian communities dispersed worldwide. There’s a definite curiosity regarding Pakistan but designers get dissuaded by the umpteen trade restrictions,” she adds. 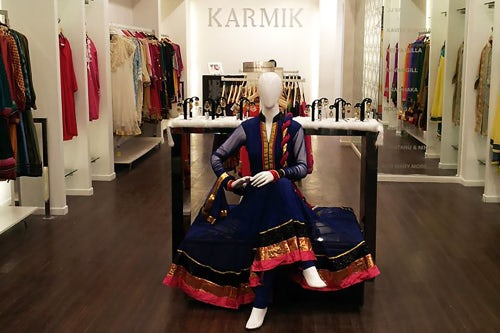 For many cross-border fashion enterprises, failure is the unfortunate outcome. Indian multi-designer fashion boutique Karmik opened with much fanfare in 2013 in Lahore by Pradeep Hirani of Kimaya Fashions, only to close down a few months later. And the popular Pakistani label Sana Safinaz no longer stocks at Tarun Tahiliani’s Ensemble in India.

“We have a very strong Indian fan-base that still purchases our prêt via our e-store or through friends visiting Pakistan,” says designer Safinaz Muneer. “It’s not worth the effort, though, until trade relations become more conducive.”

For designers who have managed to garner a considerable clientele across the border, Dubai’s neutral terrain serves as a convenient marketplace. Manish Malhotra, for instance, often meets Pakistani clients at his Dubai store, or in London, while Pakistani designer Shehla Chatoor caters to Indian customers by sending consignments to Dubai from where they can be shipped onwards, foregoing tedious customs regulations.

“Logistics do hamper trade to a large extent but my forte lies in high-end luxury-wear, with substantial profit margins,” Chatoor explains. “So even a limited number of orders from India are very lucrative for me.”

There are others willing to push forward despite the challenges. Rohit Gandhi, one-half of Indian designer duo Rohit + Rahul, says that he is keen to build his market in Pakistan. “How can I let security concerns or baseless government restrictions hamper the growth of my business?” he says. A selection of designs by Rohit + Rahul, as well as Indian heavyweights like Sabyasachi Mukherjee and Ritu Kumar, are sporadically available at Ensemble Pakistan.

Some designers find other ways to bypass the more arduous of trade barriers or they build a clientele loyal enough to make them seem less arduous. Pakistani designer Faiza Samee has long enjoyed a steady Indian customer base, thanks to consistent exhibits and an intermittent retail presence in Indian multi-label stores Ogaan and Karma. Her bespoke designs are often ordered by Indian customers via Skype and images are sent by e-mail for approval before shipping.

There are other encouraging signs, too. Indian fabric manufacturer OCM has recently gained distribution rights for the retailing of Sana Safinaz’s unstitched designer voile in India, cashing in on the huge demand for the fabric. Meanwhile, Pakistani designer Maria B. regularly creates line-ups of unstitched lawns and linens that are manufactured and distributed in India by textile company Sahiba.

By being tenacious, adaptable and exceptionally savvy, a few companies are finding ways to circumvent government-level barriers and overcome the burdensome red-tape to reap profits from across the border. It may be a drop in the ocean compared to the potential bonanza that fashion trade could yield between India and Pakistan if left unhindered — but it is a hopeful sign that the entrepreneurial spirit of the subcontinent might one day help business break free from the shackles of partition.

The Future of Fashion Resale