How 3-D Printing Is Saving the Italian Artisan

Techniques such as the 3D printing have helped turn northeastern Italy into an unlikely hothouse of innovation.

MILAN, Italy — Northeast Italy’s industrial heartland stretches roughly from Milan to Venice, along the floodplains of the Po River all the way to the Adriatic. In the 1960s, farmers in the region began setting up small family-owned businesses, each specializing in just one small part of a finished product. Within a generation, many of these companies became world leaders in their respective fields, and small Italian cities thrived as manufacturing hubs. The town of Montebelluna, north of Venice, once produced about three-quarters of the world’s ski boots, with different companies specialising in buckles, plastic shells, and foam linings. About 70 percent of Europe’s chairs were designed and manufactured by the 1,200 small outfits centered around Manzano, near Italy’s eastern border with Slovenia — with each part of the production process handled by a different highly specialized company.

Like much of the rest of the country, however, the region has fallen on hard times. Italy’s craftsmen have been undermined by competition from China and other parts of Asia. Since the beginning of the global economic crisis, the northeast’s industrial sector has shed about 135,000 jobs — some 17 percent of its total workforce. “We needed to find an escape route,” says Ignazio Pomini, the president of HSL, a 27-year-old maker of automotive prototypes located in Trento, northwest of Venice. “To use the same technology, the same skills, the same space, the existing investments, but for a new business.” 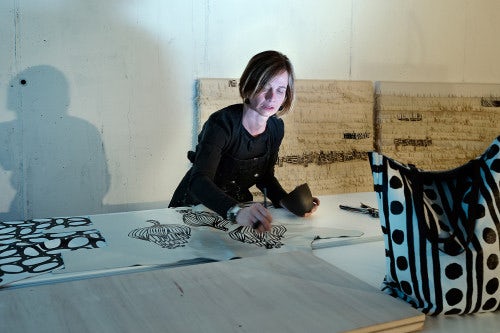 A few years ago, in an effort to diversify his company’s offerings, Pomini teamed up with Selvaggia Armani, an artist and designer. The two began working on a series of lamps designed by Armani and manufactured to order on Pomini’s 3D printers. The pieces — some of which include intricate meshwork or interlocking chains that would be difficult to produce using traditional methods — take shape slowly, each layer fused from powdered nylon by a high-power laser. The project was a surprising success: Pomini now works with more than a dozen designers; he introduced 3D­-printed jewelry in 2012. “This is the beauty of this technology,” says Armani, 47. “You can build things that are impossible.”

Techniques such as the 3D printing used by Pomini and Armani have helped turn northeastern Italy into an unlikely hothouse of innovation. Last year growth in the region was positive for the first time since 2007, at 0.5 percent. Exports rose by 3.5 percent in 2014 and are expected to keep climbing. In the province of Trento, for instance, the public and private sectors together invest some 2 percent of gross domestic product in research and development. At the Centro Moda Canossa — a trade school in Trento for children age 14 to 18 specializing in fashion design and tailoring—the faculty recently added a class in which students incorporate 3D printing, laser cutting, and microcontroller chips into their designs. “You can’t offer a job from the past. Nobody will come,” says Michele Bommassar, 36, the school’s vice director. “You have to offer the jobs of the future.” He points to a student project, a purse with a laser- cut pattern on its flap and an interior that lights up when it’s opened: “It’s beautiful, but we believe it is also necessary. The alternative is to be eaten by others.” 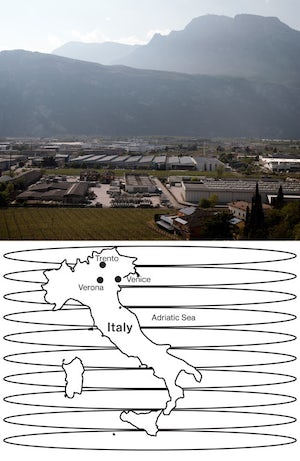 According to analysis from Italian research firm Prometeia, the use of 3D printing and other similar technologies has the potential to boost revenue at Italy’s small-scale manufacturers by 15 percent, or at least €16 billion ($17.8 billion). At their best, these technologies inject elements of the digital economy into the physical world, allowing a galaxy of small companies to compete with multinationals, in much the same way homemade YouTube videos hold their own against traditional video production. The advent of rapid prototyping and other innovations means “you can compensate for your disadvantages with variety, customization, and a rapid response to what the market is demanding,” says Paolo Collini, a business professor and the dean of the University of Trento. Or, as Armani puts it: “If something doesn’t work, you simply stop producing. You haven’t filled a warehouse. For a designer, it’s a dream. You can take more risks.”

This spirit of experimentation is palpable in Verona, the traditional center of Italy’s quality printing business. Like much of the rest of the country’s industry, it’s been gutted — the small-scale workshops are unable to compete with digital printing and faster, cheaper competition. “The traditional printers worked with their heads down for 30 years, and when they looked up, the world had changed,” says Nicola Zago, 33, one of the founders of Lino’s Type, a rare startup in the tradition-bound world of printing. With his business partner, Tommaso Cinti, 33, Zago bought a set of 1950s-era printing presses, made by the German company Heidel­berg, from an artisan who used to set many of his prints by hand. For a complex project, he might have spent days arranging letters taken from drawers, using technology not much changed since the time of Gutenberg.

Zago and Cinti still use the old Heidelberg presses, but they’ve integrated them into a manufacturing process that includes modern marketing, design, and computer-controlled production. “What the printers of Verona never understood is that in this world, it is no longer enough to work hard,” Cinti says. “You have to understand the new market, the new dynamic.”

New production processes are not the only technologies leveling the playing field for Italy’s small-scale producers. The connecting power of the Internet opens the possibility for small manufacturers to rapidly find new markets, even as Italian demand remains low. In the town of Mestre, where the causeway to Venice originates, Simone Segalin, a third-­generation cobbler, has regular customers who visit his store from as far away as China, Russia, and the U.S. Most of the technology he uses — wooden lasts, pliers, a hammer — would be familiar to his grandfather. “I’ve been around shoes since I was a child,” he says. “I grew up on bread and leather.”

Back in Trento, Pomini recently introduced customizable sunglasses, round frames with interchangeable accessories that can be clipped on and off. Since October, HSL has received unsolicited inquiries about the glasses from distributors in Ukraine, Greece, the U.S., and Brazil. The designer who created them, architect Rosa Topputo in Rome, took her inspiration from traditional Italian themes: hard angles taken from Italian rationalist architecture, a curlicue pattern derived from lacework typical of an island in the Venetian lagoon. Says Topputo: “Even when you do something with new technology, you can’t forget the aesthetics of the past.”