MOSCOW, Russia — As it has done for years, the Kremlin loomed large over the crowds lined up in front of the Manège building, waiting to enter Mercedes-Benz Fashion Week Russia. But this year, the seat of the Russian President, Vladimir Putin, seemed to loom that much larger.

No matter what those queuing for the event may individually think about Putin, his actions over the last year have radically changed the business environment for everyone involved in the Russian fashion scene; as well as dramatically impacting the economy of Russia, which accounts for 4 percent of the global luxury goods market.

Partially as a result of sanctions imposed by both the United States and the European Union, among other nations, as a consequence of the Russian Federation’s military actions in Crimea, the rouble has lost approximately 50 percent of its value. In response to the political situation, a new wave of anti-Western patriotism has popped up around the country, visible even in the bien-pensant liberal surroundings of Moscow Fashion Week.

Not more than a few metres away from the Manège building, where older generations of fur-wearing women, and younger fashionistas dressed in snow-covered black streetwear, hustled toward the fashion-events, shopkeepers sold t-shirts of Putin – shirtless on a horse, shirtless fishing, in a judo outfit, or kicking Obama in the face.

That sentiment was not here two years ago, nor was the economic crisis.

Luca Solca, head of luxury goods at Exane BNP Paribas, recently opined that Russian purchases of luxury goods would continue to decline in 2015, as a consequence of Russian consumers bringing transactions forward to the end of 2014, in a bid to spend roubles declining in value. 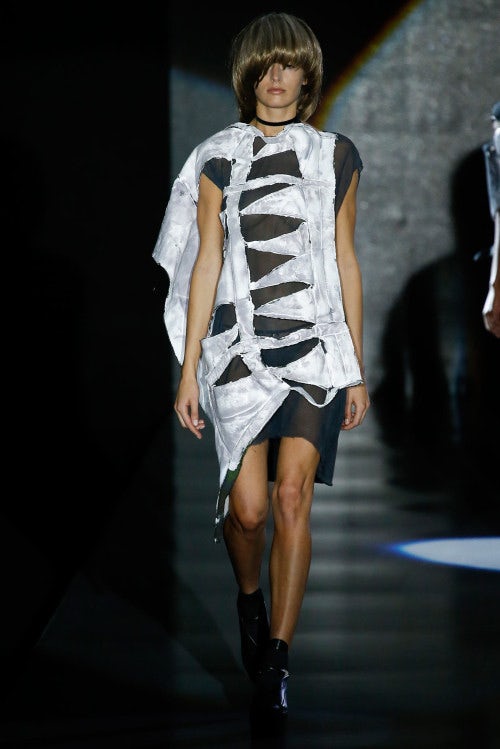 "Financially, it's been hard," said designer Jenya Malygina, after showing her Pirosmani label for a second time in St. Petersburg. "But it didn't stop me. To create this [collection], I grabbed fabrics from everywhere and anywhere I could find."

But, every crisis can be an opportunity, so the saying goes, which went repeated a few times over the course of the 30th installation of MBFW Russia.

The changed environment might provide an opportunity to convince Russian consumers to shift into buying local brands, which are now relatively cheaper – and whose talent and potential have been widely noted. And maybe, just maybe, after many years, the country might develop the kind of textile industry that would allow Russian designers to buy locally, rather than from Italy or France. The cloud may have a silver lining. But, for now, the only certainty is the cloud.

Alena Akhmadullina, one of Russia's better-known and well-liked designers, is optimistic that the shift could ultimately benefit local outfits. Since she buys her fabrics abroad but produces in Russia, her prices have not risen as much as foreign brands.

“The end costs of my clothes have gone up around 30 percent,” she says, sitting behind her shop near Red Square. “Even for very rich Russians, it's very difficult for them to see prices double [for foreign labels] and still feel comfortable purchasing them.”

Akhmadullina always bases her collections on fairy tales, this season she drew inspiration from Soviet-era folk illustrator Tatyana Mavrina, as well as celebrating distinctly Russian landscapes, like the snow-covered Tiga. But there's nothing about the current political or nationalist moment in her clothes, she says.

“Television here is so full of propaganda that I just avoid watching it,” she says. “I stay away from what's happening politically and concentrate on my work.” 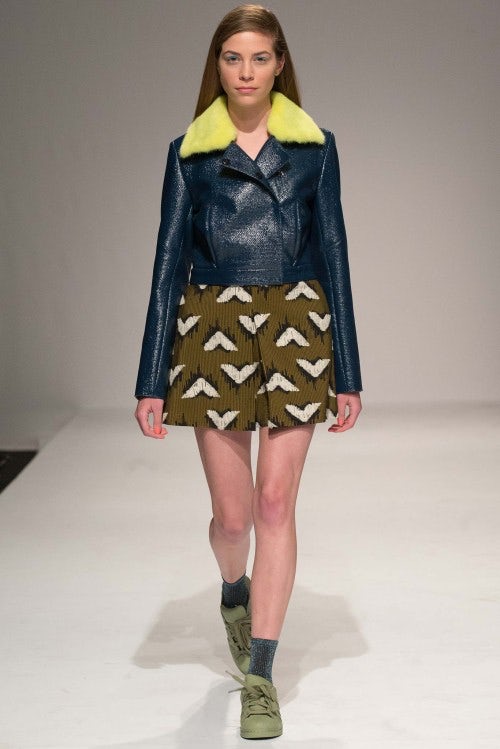 However, the current political moment, and the anti-western patriotism that informs it, could also be a boon for domestic designers, as consumers may want to shift their purchases to something “Made in Russia,” says Alexander Shumsky, President and founder of MBFW Russia.

“Due to the political situation, consumers here are more eager to buy something produced in Russia than two years ago, it's a strange type of patriotism applied to consuming goods,” said Shumsky. “Ten years ago, perceptions here started to change, as less people wanted just the big-name foreign brands and more were interested in style and sophistication. They want to buy made in Russia stuff, but if you go to the local mall, there's still very often little there that is from Russia,” he continued.

Indeed, despite the fact that some parts of production could make Russian designer clothes cheaper for export, designers like Yasya Minochkina, who shows in London, has a showroom presentation in Paris and is stocked in China, France and Italy, agree that the challenge now is to “become strong in the home markets.”

“Business-wise, the situation in the Ukrainian and Russian markets is not so inspiring for obvious reasons, on the other hand Russian retailers are waking up to the fact that there is a huge amount of talent active in Eastern Europe,” said Minochkina.

Solca, on the other hand, is not so sure consumers in the luxury sector change their brand preferences so quickly, and noted that foreign brands are no longer priced at 200 percent of their former rouble ticket value, having been marked down since the arrival of the crisis.

Vincent Bevins was a guest of Mercedes-Benz Fashion Week Russia while in Moscow.