For the first time, Australian Indigenous Fashion Week provides a platform for the country’s Aboriginal designers. 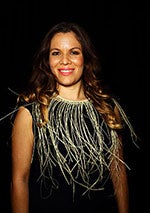 “In terms of Aboriginal and Torres Strait Islander art, the mediums have been visual — hieroglyphics and landscapes, sculptures and canvas,” Krystal Perkins, AIFW founder and granddaughter of Aboriginal civil rights activist, Charles Perkins, told BoF. “The international community knows that aesthetic, the style of our paintings and art. What we’re doing is trying to nurture the next level, which is textile design, fashion design, and the manufacturing of fashion and wearable accessories.”

With an eye towards capturing the global fashion industry’s appetite for authenticity, AIFW has established a national mentoring platform for indigenous fashion designers and encouraged the development of an “indigenous-made” garment supply chain, leveraging the traditional skills of Aboriginal and Torres Straight Islanders in remote communities, including block printing, silk weaving and using echidna quills and kelp for adornments. “There’s this sort of translation there between telling a story and using very old traditional methodology, such as land and sea management, to make garments which are sustainable,” Perkins says. “Communities have taken their skills and used them for fashion. It’s a nice ecosystem.”

The design world is cottoning on to that fact that story builds preciousness into objects.

Over the past year and a half, 18 Australian indigenous designers took part in an intensive design program at Sydney’s Whitehouse School of Design, tutored by former Sass & Bide designer Sophie Nixon, with the goal of creating collections to present at AIFW.

At the resulting shows, designers presented contemporary collections that drew on their own individual heritage and stories. Some used unexpected methods, such as Mia Brennan of MiMi designs in Byron Bay, who showed a boho look, using silks that she had buried underground for up to three weeks at a time to create unusual rock and clay imprints. Cairns-based designer Grace Lillian Lee, who studied fashion at the Royal Melbourne Institute of Technology (RMIT), put together a deconstructed version of resort-style island dress, working with silk, prints and charcoal drawings. “I’m reconnecting to part of my heritage and representing and showcasing it in a new dialogue,” she says. “I’ve been researching and reconnecting with elders of mine that have been teaching me techniques, such as weaving and also techniques used within ceremonies. However, it’s my view. It’s completely contemporary, seen through my own experience.” 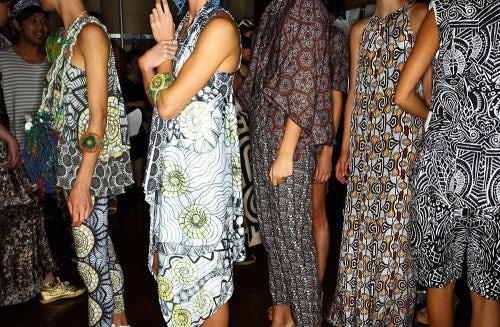 On the morning of the event, vice-president and global creative director of IMG, Jarrad Clarke, announced that AIFW would be part of the official schedule for Mercedes-Benz Fashion Week Australia, starting in 2015. “We’ve seen so many collaborations already happen with the Australian fashion industry,” said Clarke. “Our doors have opened for [AIFW] to be part of our on-site schedule next year. It’s a training wheel experience and we’re all really looking forward to seeing how this can grow. Not just for the local indigenous community, but the Australian fashion industry,” he continued, later adding: “You have a great opportunity here because the whole world is trying to create that storytelling and you have a great story to tell.”

“The design world is cottoning on to that fact that story builds preciousness into objects,” says Alison Page, an indigenous Sydney-based interior designer. “And as soon as you build preciousness into objects they don’t become disposable. They become something you want to pass on to future generations. And so if they’re made beautifully, and they’re made to last, why can’t you have these beautiful objects passed on? Some people call it the slow fashion movement; some people call it the slow craft movement. I call it Aboriginal design.”

How saleable indigenous-designed garments might be in the global fashion market was unclear, however. “To be a successful brand, I have this mantra for you,” advised David Bush, former general manager of womenswear at David Jones. “Be the first, be the best or be different. And if you can’t be at least one of these things, go home. Consumers have so much choice, you have to be able to offer them something they don’t have already. It has to be stylish. It has to be fashionable. It just can’t be a lovely design. There’s plenty of lovely art, but art doesn’t necessarily translate into fashion.”

“Yes, I’ve seen so many beautiful prints and designs here,” agreed Nancy Pilcher, former vice-president of editorial development at Condé Nast in Asia-Pacific. “From my perspective, I think the print is one thing but the design is vital. Does it have to be modern? Does it have to be of the trend, as we’re seeing in fashion magazines? There’s no doubt the prints are amazing, but if it’s done in a way that doesn’t suit the fashion trends, no one is going to buy it.”

Later, backstage after the show, Pilcher added: “There is a future here. There is a story and the indigenous know how to tell a story through their art. It’s so meaningful for them and so natural for them to do that sort of thing. [But] There has to be a plan to take it forward. These indigenous designers have to be guided. It has to be fashionable. It needs to have the edge that makes it interesting for the global fashion world.”

Brana Wolf, who has worked with brands including Valentino and Louis Vuitton, lent her hand to help style the show, and even visited some of Australia’s remote indigenous communities to help choose the fabric and observe the block printing used in the show. Wolf says the challenge for indigenous designers will be to find the right market, but that for the moment it is just “baby steps, very baby steps. The designers have been mentored for only 18 months. But there are definitely a couple of girls here that should be watched.”

“It’s a spark,” volunteered Kannon Rajah, the Sydney-born visual and casting director whose clients include Victoria’s Secret, Fendi and Versace. “[AIFW] is something we all need to get behind and support, because there is incredible talent here. But it’s hidden talent. These guys have never had the platform to showcase their work. And it’s very important. It will give the indigenous community other outlets and other avenues so that they can see a pathway. It’s important to give the youth coming through new role models and make them feel like their Aboriginal culture and design and beauty is to be recognised. Our dream is to within 10 years it to have someone make it on the international stage. We need to go at it hard.”

“I think non-indigenous Australians in the audience today connected with our Aboriginal past,” reflected an emotional Krystal Perkins. “I think Australians want to actually reconcile that. I know that’s a word — reconcile — that’s used a lot, but I think it’s about having a relationship and contact with Aboriginal people. And because it’s contemporary, it’s got nothing to do with politics or social issues. It’s about enjoying art together and being proud of culture together. It’s a huge process for Aboriginal people [to present their work in this way], because it’s so sensitive. We’re very visual and we’re very much about protecting our art and design and our stories. And they’re out there now. It’s about actually letting go and letting people understand it.”