MUMBAI, India — Last month, a record-breaking 42,000 participants took part in the 14th edition of the Mumbai marathon. Set against a backdrop of the city's historic Chhatrapati Shivaji Terminus railway station, elite and amateur runners joined Bollywood celebrities, sports personalities and business tycoons in a bid to cross the finish line, making the run the largest mass participation sporting event on the Asian continent.

Over the past few years India has rapidly caught up with the wider global fitness trend. Driven by the country's growing wealth, changing lifestyles, and rising urbanisation, an increasing amount of Indian consumers are becoming more health conscious and are adding new health and wellness routines to their hectic lifestyles as a result.

From 2015 to 2016, the Indian sportswear market grew 22 percent, outpacing the segment's global increase of 7 percent according to Euromonitor. By 2020, it is expected to grow an additional 12 percent CAGR (compound annual growth rate) with sales expected to reach $8 billion.

"There are many factors at play here," explains Bandana Tewari, Vogue India’s editor-at-large. "Rising incomes and discretionary expenditure in urban India have allowed people to focus increasingly on health and wellness, as well as rising awareness of lifestyle diseases. The proliferation of international brands represented by sports and Bollywood stars have kept sportswear in the public eye fuelling this drive as well."

Previous generations made no bones about the hourglass figure being the beauty ideal, but the millennial beauty vocabulary has changed.

Meanwhile, running, cycling and team sports are amongst India's fastest trending exercises — the number of gyms in the country is projected to rise 7 percent year-on-year till 2020 — and the rise of social media in the country has shifted consumer perception of what is now considered to be 'body-beautiful'. A growing number of consumers – both female and male – are emulating the daily fitness routines and sportswear purchases of Bollywood stars and famous athletes.

With these social, cultural and market shifts continuing in the years to come, India is gearing up for its biggest sporting boom to date. This makes the country’s sportswear sector increasingly attractive to a host of local and international brands.

Though it has an exceptionally high number of underweight people among its poorest classes, India also has an obesity problem among the more affluent. In 2014, it was the fifth most obese country amongst men and jumped to the third rank for women — with over 20 million of them being obese, as reported by British medical journal The Lancet.

Motivated by this, government backing was one of the catalysts to initiate the fitness movement that started about three years ago. Making use of subsidies, local councils started focusing on fitness accessibility by making public jogging tracks, gyms and swimming pools.

"In my opinion, the biggest driver [of sportswear purchases] is the fact that India is a very young country," says Tewari. In fact, India is set to become the world's youngest country with 64 percent of its population in the working age group by 2020, and for many of them beauty standards have radically changed from those of past generations. “In the past, people were not as conscious about their looks as the youth today who are also more careful about what they eat. In fact, being overweight used to be celebrated as looking good because it was seen as prosperous,” says Bengaluru-based Euromonitor research analyst Shreyansh Kocheri.

"Previous generations made no bones about the hourglass figure being the beauty ideal [in line with] visual imagery of gods and goddesses depicted in books and temple carvings," agrees Tewari. "But the millennial beauty vocabulary has changed to include terms like lean, ab-fab, and muscle tone, making the famous S-Curve take a back seat," she adds.

Driving the sportswear trend further into the masses are Indian pop culture icons, who are becoming self-proclaimed spokespersons for the movement. "Bollywood is an integral part of Indian households and everyone looks up to Bollywood celebrities and the trends they follow. When they come out and tell their followers to have a much better and healthier lifestyle, people listen," adds Kocheri.

Indeed, in the past year alone, several Bollywood actors have voiced the importance of a healthy lifestyle and looking fit. This year's Vogue India January 'Body-Beautiful' edition featured Bollywood stars Hrithik Roshan and Lisa Haydon. Roshan has been at the forefront of India's fitness movement after he launched his popular activewear line HRX in 2013. Additionally, actress Deepika Padukone was one of the faces of Nike's 2016 'Da Da Ding' campaign; Bollywood superstar Salman Khan was appointed as Goodwill ambassador for the 2016 Rio Olympics; and Priyanka Chopra's sculpted body can be seen in this summer's remake of Baywatch.

International sportswear brands were among the first to spot an opportunity, with many of them entering India in the mid-1990s. For those that did, franchising was the only viable business model. "Previously, companies could not come and open up their own stores in India. They had to get into a partnership with a local player that needed to have a higher stake than the brand," explains Kocheri.

Over the years, a flood of local franchisees got into business with aspirational sportswear brands, facilitating a rapid expansion of their presence throughout India.

Today, 80 percent of India's sportswear market is dominated by the "Big Four" global players (Adidas, Reebok, Nike and Puma), with others such as Under Armour, Fila and Lotto, domestic multi-brand sportswear retailers like Planet Sports and Royal Sporting House, and emerging local players, collectively battling for the remaining 20 percent.

Between the "Big Four," Adidas AG — parent company of Adidas and its subsidiary Reebok — currently holds a 45 percent share of the market, operating all of its 760 stores through the franchise model. "We would like to take this number [of own retail and franchises] up to 1,000 stores by 2020," says Dave Thomas, managing director of Adidas and Reebok India. Competitors like Puma and Nike also run their operations in the country through franchising — all of Nike's 200 outlets are licensed by local franchising partners.

In the past it was seen that a smaller store was less rent, which meant more profits. Now the logic is, a bigger store will drive profits.

However, change is afoot. In September 2012, India's Department of Policy and Promotion permitted 100 percent foreign direct investment across single-brand retail. Two years later, Adidas became the first multinational sportswear company to get the governmental nod to open single brand retail in the country — a similar application filed by Nike in August 2014 was rejected.

The shift in regulations has provided brands with opportunities to rethink their distribution strategies, and many are now doing so as the challenges around franchising are starting to show. "The franchise model in the past has limited us a bit. It made us open a lot of stores but not all stores in the right places. They were neither strategic nor representing our brand properly or profitably," says Thomas.

Last year, Adidas AG shut 100 stores, as part of its move towards a directly owned retail restructuring across India's key cities, including Delhi, Mumbai and Bengaluru. In the next five years, Adidas is set to open between 20 to 40 large format monobrand stores. The way the firm approaches franchising will also evolve. "We'll show our franchise partners what's possible for our brand. In the past it was seen that a smaller store was less rent, which meant more profits. Now the logic is, a bigger store with better products and a better experience for the consumer will drive profits," Thomas adds.

"We see more demand every day with more people coming to our website and retailers," says Rajiv Gaba, national sales head at Punjab-based sporting goods company Vector X. The brand, which prices its products below Nike and Adidas, counts over 500 stockist in India, including e-commerce giants Flipkart, Jabong and Snapdeal. 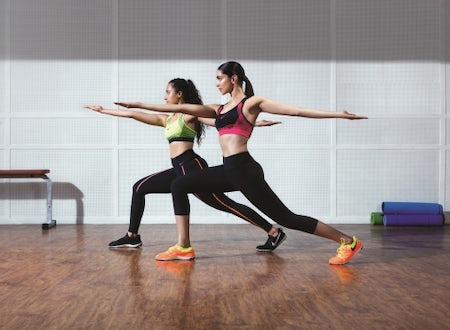 Still, popular Indian sportswear labels like Wildcraft India, Future Lifestyle and HRX are finding difficulty penetrating a market that is becoming increasingly crowded. "Domestic players have only now started looking at this growing trend in this space, and international players have a big head start," says Kocheri, who notes that the opportunity for domestic players is to dive into the masses by leveraging affordable price points to consumers in tier two and three cities.

However, for brands wanting to compete with established names like Adidas and Reebok, differentiating themselves by making product accessible to markets outside of the country's urban centres, might not be enough in today's online culture, where Indian e-commerce players like Amazon India, Flipkart, Jabong and Myntra act as brand middlemen.

"Having a large portfolio of brands ranging from low price to premium sportswear, we cater to all types of customer demands," says Arun Sirdeshmukh, head of fashion at Amazon India. "Between 2015 and 2016, sportswear in metro and tier two and three cities grew close to 80 percent. The footwear category grew 100 percent for metro and tier two cities and there’s also a strong demand we see from tier three cities which grew over 110 percent."

To broaden its reach, Adidas is diversifying and adapting to the Indian market reality. "We still have a mass-market appeal and in India that appeal does go down to a lower price-point. We've segmented and brought different products at different price-points to the market in different channels," says Thomas. "Being a driver and developer of the market will be about growing strongly, profitably and sustainably."

Is India the Solution to Fashion's Woes?