BERLIN, Germany — On paper, Germany should be the fashion capital of Europe. The country is Europe’s largest national economy and its biggest consumer of apparel and footwear, according to Euromonitor. Berlin alone is the site of ten fashion schools, a Mercedes-Benz Fashion Week and more than five leading fashion trade fairs. German cities are brimming with fashion businesses; Berlin is home to 3,670; Munich, 2,670; Hamburg, 2,220; and Cologne, 1,910, according to a report by Berlin Partner for Business and Technology, a public-private initiative that markets the city.

Germany is also home to several important luxury brands — from Hugo Boss, to Escada, to Jil Sander — as well as the birthplace of sportswear giants Adidas and Puma. Fast-fashion behemoth H&M counts the country as its biggest market.

And yet, Germany is not a significant influence in international fashion. New York, London, Paris and Milan are globally recognised fashion capitals. The same cannot be said of Berlin, Hamburg, Munich or Cologne.

“Germany has never had really big labels,” said Martin Premuzic, creative and managing director of Temporary Showroom, a Berlin boutique and sales agency that showcases emerging German and international fashion designers. “Of course, you have Karl Lagerfeld, though I wouldn’t say he’s German, he’s more French than German. Of course, we have German designers, but we don’t have a German Donna Karan or other really big ones.”

German brands do not wear their heritage on their sleeves, and rarely trade on a sense of German-ness. “Our roots are German, however we are very much a global brand; the majority of our revenues come from outside Germany,” said Megha Mittal, chairman and managing director of Escada.

“[Germany’s] attractiveness for exceptional fashion talents — not only designers, but also fashion photographers for example — is not very high and they tend to leave the country for a more inspiring environment like Paris, London or New York to gain international success,” said Kai Margrander, fashion director of Harper’s Bazaar Germany, citing Karl Lagerfeld, Bottega Veneta creative director Tomas Maier and photographer Jürgen Teller as examples of this.

The German taste for understatement and simplicity may also be part of the reason for the country’s relatively small fashion influence. With a few notable exceptions (Hugo Boss, Jil Sander and Escada), Germany’s biggest clothing brands are positioned at the middle of the market, delivering practical basics and styles that serve the tastes of the country’s ageing population (Germany has one of the lowest birthrates in the European Union).

In fact, Germany is home to many of the biggest fashion brands you’ve never heard of. German fashion group Gerry Weber ranks in the top 100 of the world’s largest fashion firms, along with Hermès and Prada. Bavarian brand s.Oliver and NewYorker, a label based in Braunschweig, both post annual sales exceeding a billion euros, generated, in no small part, through healthy domestic sales. Both s.Oliver and NewYorker have global store networks, but neither have entered the US or UK markets. 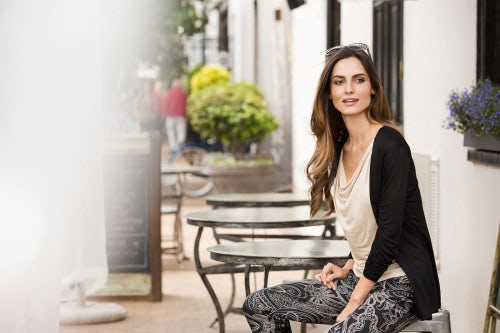 “It is a wealthy country but quite conservative when it comes to fashion,” said Adriano Sack, style editor at German Sunday newspaper Welt am Sonntag. “That might be due to its Prussian work and life ethic and a general hesitation to show off. More subtle and less ‘fashion’ labels are doing well, but Germans spend their money rather on cars than on couture.”

“There is a prejudice, which is true, that Germans like functional wear,” said Martin Premuzic, noting that the majority of brands sold at Temporary Showroom are international and that the same is true of the store’s clientele. “Concerning fashion, Germans don’t really spend here as much; I can really feel it in my store… you can really see that Germans go more for the safe stuff.”

Germany’s relative lack of fashion influence can also be linked to the country’s fragmented political history. Since 1871, when the Germanic states were first united, the country has repeatedly been broken into pieces and put back together again. Hewn into East and West after the Second World War, Germany spent most of the second half of the twentieth century divided into two different economic and political systems.

Even today, the country remains somewhat divided — between the thrifty north and the wealthier south and by the insularity of its 16 Bundesländer (geographical states), which each retain a measure of sovereignty. According to Kai Margrander, the fragmentation that pervades the country’s history is, in part, responsible for the lack of cohesion in the nation’s fashion infrastructure, and, indeed, the absence of a German fashion canon.

“Maybe the situation would be different if the German fashion industry had managed to focus on one city as its capital in the past 25 years after the reunification, and Berlin — or Hamburg, or Munich, or Düsseldorf — would be more internationally recognised,” said Margrander. “We are still very far away from finding this focus.”

“As [with] many things in our country, I am sure this fact roots in the dark days of the Nazi reign,” Margrander continued. “Before coming into power in 1933, Berlin indeed was one of the major fashion capitals in the world. Its wild decadent nightlife was the international stage for the fashion extravaganzas of the time and even had a German Vogue edition for a short period in the late twenties.”

This liberal spirit was erased by the Nazis. Jewish businesses were shut down or forced out of the country; the liberal-minded creative and intellectual elite subdued or expelled. “The country is still recovering from this massive cultural loss and wounds today,” said Margrander.

Fashion simply does not run in Germany’s blood in the way that it runs in the blood of the French and the Italians. But there are signs that things are evolving. Berlin, today, attracts a wide range of creative communities like a magnet. And, since 2007, the inaugural season of Mercedes-Benz Fashion Week Berlin, the number of fashion shows and presentations held during the week has increased by almost fivefold. According to Berlin Partner, between 600 and 800 working fashion designers call the city home and the city government lays down €75 million in subsidies for local businesses, including creative firms.

“Berlin is the creative epicentre of Germany,” said a spokesperson for IMG, which runs Mercedes Benz Fashion Week Berlin. “The city’s inspiring energy and various commercial opportunities create the perfect home for both emerging and established designers.”

“There is something rather solid about the German fashion houses, which is almost an opposite to la frivole française,” said international Vogue editor Suzy Menkes, adding that, in a world where taste for spectacle is fading, “this could be Germany's moment.”

Yet few big labels show at Berlin Fashion Week — Hugo Boss, its biggest draw, decamped last year to show in New York — and the international fashion press pay the event little attention. When asked why he wasn’t showing at Berlin Fashion Week, Kostas Murkudis, who, in 2012, served as an adviser to Nicolas Ghesquière at Balenciaga and was tipped to be Germany’s next big designer, told German weekly news magazine Der Spiegel: “I'm not really into all this domestic self-congratulation in a city with no real competition. I'd rather fail on the international stage.”

Berlin’s fashion schools, too, enjoy little international acclaim. And, last week, the city’s key international trade fair, Bread & Butter, cancelled its upcoming January edition, saying in a statement: “We have not been able to motivate a sufficient number of exhibitors to participate this season.”

Berlin is home to a number of trailblazing stores, however, including Darklands, which stocks labels like Alexandre Plokhov and Raf Simons x Sterling Ruby; Andreas Murkudis, in the gallery-riddled area of northern Schöneberg; and Bless, which offers ground-breaking fashion and interior design objects. Domestic fashion role models are also emerging in the form of young brands like Tillmann Lauterbach and Augustin Teboul, a Woolmark Prize finalist, with something of a distinct Berlin aesthetic beginning to bloom: dark, minimalist and tailored. But Berlin’s fashion scene remains fledgling and small-scale.

“The scene is new, creative and young and is currently developing its own signature. This obviously takes time,” conceded Berlin-based fashion designer Marina Hoermanseder.

With Germany’s usually sturdy economy heading for rough waters and a potential recession, cultivating a strong internationally recognised fashion identity that reflects the city — unpretentious, edgy, avant garde and socially conscious — will not be easy.