A customer walks out of Mitsukoshi department store after being closed earlier than usual in Tokyo's upscale Ginza district on April 7 | Source: Getty Images
Global Markets
Share
Comment
By Zoe Suen May 1, 2020 05:20

LONDON, United Kingdom — Japanese culture evokes either futuristic efficiency or an admirably stubborn sense of traditionalism. When it comes to the local retail scene, it’s definitely the latter.

“A lot of people think Japan is ‘advanced,’ but we aren’t there yet in comparison to other countries, especially when you talk about high-end e-commerce,” said Seiko Mbako, co-founder of Tokyo-based consultancy Awa’Tori.

Amid the current coronavirus crisis, Japan’s resistance to online sales channels spells trouble for international fashion brands who now find themselves unable to leverage e-commerce to the extent that they need. Luxury players are far more dependent on physical retail in Japan than they are elsewhere.

In-store spending has largely ground to a halt since the Japanese government on April 16 announced a nationwide, month-long state of emergency that was extended this week. Though Prime Minister Shinzo Abe’s administration stopped short of imposing a full lockdown, street traffic dropped between 50 and 80 percent in major urban districts last weekend according to data from mobile phone operator NTT Docomo.

Drawing on previous crises in Japan like the 2011 earthquake and tsunami, Credit Suisse Analyst Takahiro Kazahaya noted in a recent report that Covid-19 is finally set to spur an uptick in e-commerce’s market share in the country. But it will also be an overdue reckoning for brands and retailers in a luxury market that global research firm Gartner estimates is worth $24 billion and has been slow to shift sales online.

China has understandably dominated the spotlight when it comes to Asian luxury consumption because of its unrivalled scale, growth and dynamism, but Japan remains a critically important market. Last year, Japan made up 13 percent of Hermès' global revenues — a remarkably high proportion for just one country when you compare the brand’s revenues from the entire western hemisphere (including the United States, Canada, Mexico and Brazil combined) which totalled just 18 percent.

To understand just how critical the Japanese market is for luxury conglomerates, consider that almost a quarter of all LVMH’s physical stores across the Asian region (including those in China and India) are located in the country. For Kering, Japan’s importance — and its need for a distinctive approach — is underscored by the fact it remains the only country that the group consistently breaks out in its earnings report; the breakdown of the rest of the world is done by region.

Luxury players are far more dependent on physical retail in Japan than they are elsewhere.

As the coronavirus crisis exposes how over-reliant many luxury players have become on China, it makes sense for brands to direct some of their attention toward other smaller, high growth emerging markets around the world. At the same time, brands need to invest and strategise carefully to maintain much-needed revenue streams from old reliable mature markets such as Japan.

When one looks beyond brands' own e-commerce sites — which 88 percent of luxury players operate in Japan, according to Gartner data — multi-brand e-commerce lags behind most other markets. No online luxury destination — global or local — has yet to claim a clear market leader position.

The likes of Net-a-Porter, Mytheresa and MatchesFashion do operate in the market. “In Japan, [when] we launched our localised website last year, order numbers increased year-on-year throughout [the first quarter],” MatchesFashion’s Head of Brand & Communications Jason Lam told BoF.

However, awareness remains low, said Mbako, who often gets confused reactions from consumers when she mentions these big global e-tailers. “In Japanese we call it tententen, meaning people [react by staying completely silent because they don’t recognise the names I’m saying].”

According to Gartner, the homegrown frontrunner is multi-brand marketplace Zozotown, but adoption has only been high among accessible luxury brands — 91 percent of them sell on the site and no pure luxury brands have followed suit. The platforms is, however "planning to include luxury brands as part of future product expansions," a company spokesperson told BoF — something global brands should keep an eye on.

Meanwhile, mass e-tailers like Rakuten, Amazon Japan and Yahoo Japan have yet to link up with many top brands or successfully launch high-end platforms — something China’s Alibaba-owned Tmall has succeeded at with its now three-year-old invite-only Luxury Pavilion, which stocks the likes of Chanel and Bottega Veneta.

Rakuten, which launched its Brand Avenue portal in 2012 and last fall signed on as Tokyo Fashion Week’s new title sponsor, has yet to pull a major premium brand. When asked about plans to enter the high-end segment, a Rakuten spokesperson said that the firm didn’t have any concrete plans to share.

“Rakuten and Amazon have tried to build their identity as an e-commerce site for high-end fashion, but they haven’t given it their 100 percent,” said Mbako.

Although the outlook for Japan’s social distancing measures remains unclear, brick-and-mortar-dependent luxury brands will be impacted regardless because footfall has not been high since the local outbreak began to increase in severity.

Any hit that luxury brands take in Japan will be partly down to underinvestment in digital channels in recent years, suggest analysts like Yo Douglas.

“Over the past four years that we’ve been observing the luxury sector’s e-commerce utilisation in Japan, we haven’t seen significant development either by brands or e-tailers,” said Douglas, Gartner's senior specialist for research and advisory in the APAC region. Douglas compares this with the Chinese market, where brands and retailers have made leaps and bounds with brands aggressively adopting new direct-to-consumer channels and retailers revamping the online experience.

Japan’s rapidly ageing population has been one reason for the glacial pace of growth for its e-commerce industry. According to a 2019 Morgan Stanley report, over 28 percent of Japan’s population is aged 65 or older. Moreover, the firm cited older generations’ reluctance to shop on mobile phones as a reason that mobile commerce accounts for just under a quarter of completed e-commerce sales in the country.

Any hit that luxury brands take in Japan will be partly down to underinvestment in digital channels.

Covid-19 could also be the tipping point for Japan’s adoption of cash-free transactions, said Tatsunori Kuniyoshi, analyst at Euromonitor International. “[The] Japanese government is eagerly promoting non-cash payment methods by providing incentive to both retailers and consumers... this movement is likely to [accelerate] thanks to the fact that these non-cash payment methods such as QR codes are considered as an option to prevent infection.”

The current crisis will push consumers of all ages to adopt new technologies and this juncture could serve as a valuable opportunity for luxury brands to make long overdue investments — studies have found that so-called “silver shoppers” display stronger brand loyalty and favour repeat purchases.

Luxury brands catering to older shoppers should cater to their needs digitally too. In its report, Morgan Stanley encouraged companies to invest in building an accessible and user-friendly user interface (or partnering with a local on-brand retail platform) and ensuring their e-commerce experience is compatible with a largely single-language nation.

In recent years, many of Japan’s esteemed century-old department store giants have survived in part thanks to inbound tourists’ luxury spending – especially the Chinese.

“As the traditional department store’s strategy is to provide unique and specialised shopping experience through well-designed physical outlets, for a long time it seemed to be okay to place less focus on online shopping,” Euromonitor’s Kuniyoshi said. But with stores shuttered and travel at a virtual standstill that could persist beyond the second half of 2020, outmoded business models have come into sharper focus.

“Department stores will be most negatively affected by the crisis because they still heavily rely on in-store sales,” said Gartner’s Douglas. “The majority of their customers are over 40 and they’re less attracted to online shopping.”

In its annual report for the fiscal year ended February 29 2020, J. Front Retailing (the owner of department stores Ginza Six and Parco) forecasted 165 billion yen (around $1.5 billion) and 3.3 billion yen ($30.9 million) declines in its gross sales and operating profit respectively due to Covid-19. The report stated that major challenges — like the vulnerability of its business model, a weakening middle class and shrinking apparel market following a nationwide tax hike — were exacerbated by the pandemic but made no explicit reference to e-commerce. 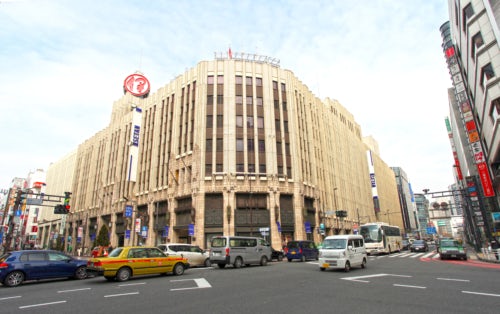 Even groups with online channels aren’t safe. “According to some data we’ve seen, traffic to [Isetan Mitsukoshi Holdings’] e-commerce platform... hasn’t increased in the past three months,” Douglas added.

As the crisis forces department stores to explore new business models, it will only become more important for luxury brands to diversify their retail channels in the market. Though tourism flows and spending will eventually recover for the department stores that survive the fallout, brands at the forefront of digitisation will be better equipped to make the most of a rebound.

The Race to Get in Line

Ultimately, Japanese shoppers’ high awareness of luxury brands and appreciation of experiential retail signal the market’s largely untapped potential when it comes to digital and online-to-offline (O2O) offerings. Furthermore, the country’s sophisticated logistics infrastructure means that brands can count on efficient systems for delivery while brick-and-mortar recovers from the pandemic.

For agile and resilient businesses, Covid-19 could be the wake-up call that brings about a long-overdue digital transformation. Luxury brands looking to tap into this need to act now.

This could speed up development across the platform’s existing e-commerce capabilities, which haven’t yet been embraced by luxury players. “This [merger] gives Line a very good position to become a hub for multiple online services... covering all aspect of consumer’s daily life,” said Euromonitor’s Kuniyoshi.

In other words, Line is set to follow further in WeChat’s footsteps to become a super-app by developing an all-encompassing digital ecosystem, which it has so far been comparatively slow to do. This will bode well for luxury brands like Louis Vuitton with established followings on the app.

Gartner’s Douglas added that though Line launched a “mini app” function (its answer to WeChat mini programs) this year allowing brands to introduce digital membership cards and make in-store appointments, the response from luxury players has been muted.

By staying abreast of new e-commerce functionality developments that emerges out of the upcoming merger, companies could build e-commerce infrastructure on top of their existing communities. In the meantime, shifting spending from now-redundant activations like digital events towards a wider range of marketing functionalities on the app will keep them top-of-mind and likely to benefit from a rebound in demand further down the road.

The BoF Podcast: Luca Solca on ‘The Worst Year in the History of Modern Luxury’