Made in America | From Detroit's Urban Decay, Shinola Rises

Amidst the urban decay of Detroit, a shoe polish purveyor reborn as a luxury watchmaker is bringing hope to the city's beleaguered manufacturing industry.

DETROIT, Michigan — America’s “Motor City,” once world famous for the scale of its automobile manufacturing industry, filed for bankruptcy on July 22 in the largest municipal collapse in US history. In a city with up to $18.5 billion in debt, the signs of severe urban decay are everywhere: 40 percent of street lights do not work; the clearance rate for crimes is a measly 8.7 percent; 78,000 buildings sit abandoned. But there is also Shinola, the recently revived American heritage brand, whose primary business is watches, that’s bringing new hope — and new manufacturing jobs — to the beleaguered city. “It’s all based around the premise of creating jobs,” Shinola CEO Steve Bock told BoF.

Many worlds away from Detroit, in New York’s affluent TriBeCa, Shinola recently opened a 2,000 square-foot, white-washed flagship (complete with a newsstand and juice bar) which surpassed its sales goals for the entire year within its first month of operation. Shinola watches are also stocked at luxury retailers Barneys New York, Nordstrom, Bloomingdale’s and Neiman Marcus, as well as 40 independent dealers. And while the privately-held company does not disclose revenue figures, Bock reports that Shinola plans to produce between 40,000 and 50,000 watches in 2013. At prices that average around $600, that’s between $24 million and $30 million in revenue at retail.

From 1907 to 1960, Shinola (then based in Rochester, New York) was best known for its shoe polish. “You don’t know shit from Shinola” was once a popular colloquialism. But in 2011, the long-defunct brand was relaunched by Tom Kartsotis, founder of Fossil, who bought the rights to the name and established a new business in Detroit focused on watchmaking. Kartsotis, who founded Fossil in 1984, has been in the watch business for more than 30 years. But the majority of this time was spent focused on the $150 timekeepers that constitute the bulk of Fossil’s multi-billion dollar business. (Much like Luxottica in eyewear or L’Oréal in beauty, Fossil also designs a good deal of licensed watch lines for brands including Michael Kors, DKNY and Diesel.) 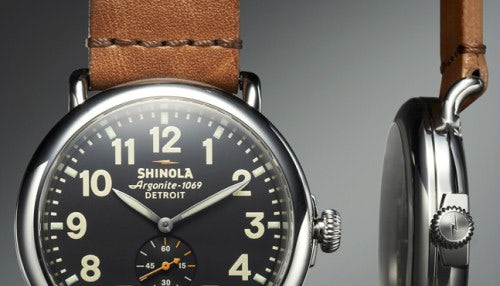 Shinola has a different strategy. The company aims to disrupt the luxury watch market by offering a quality product — that would normally cost $2,000 from an established made-in-Switzerland brand — for only $600. As with many luxury watches, Shinola’s parts are produced in Switzerland by movement company Ronda. But, critically, the final timepieces are assembled in Detroit at the company’s 40,000 square foot facility on the fifth floor of the College for Creative Studies.

Swiss movements, as they are called, are incredibly complicated, which means those who are experts in their assemblage are very expensive to hire. Instead of hiring experts, Shinola decided to take on eager workers in Detroit, then bring in watchmaking experts from Switzerland to train them. They have also imported a manager from Ronda to run their production facility. Shinola currently employs 115 people, about 70 of whom live in Detroit, of which 45 work in manufacturing. “They come from the automotive industry, the retail industry — all walks of life,” said Bock, who previously worked for Kartsotis at Fossil and spent time at Sephora, Saks Fifth Avenue and Avon.

Shinola’s workers are also crucial to the company’s marketing strategy. Each of these “craftspeople,” as Shinola refers to them, is featured on the brand’s website, which lists their place of birth and length of service to the company. “The heroes of our marketing are the people assembling the watches, as well as the quality of the products, the quality of the components, and the city of Detroit,” Bock says. “We don’t have to go out and build a false structure to cover [marketing] costs.” Indeed, the brand’s mission has a built-in marketing story with plenty of potential to generated earned media attention. “It’s all based around the premise of creating jobs,” said Bock.

But Shinola is realistic about its impact on the overall economy. After all, adding 45 new manufacturing jobs over two years is not going to make a dent — not even a tiny one — in Detroit’s catastrophic unemployment rate, which was 16.3 percent in May 2013. But what it does help to create is a sense of hope that Detroit has a future.

Shinola aims to ramp up production to 500,000 watches annually. “While we have excellent capacity potential, much of that capacity will be non-Shinola watches and potentially even non-Bedrock brands,” says Bock, alluding to Shinola’s parent company, which acquired Filson, in 2012, and has invested in Steven Alan, Claire Vivier and Mollusk Surf Shop, amongst others, some of whom may also begin producing watches in Detroit. Licensing — a key to the success of Fossil, which, in 2012, posted double digit growth for a third consecutive year — could be part of the plan, too.

But whatever the future holds for Shinola, one thing’s for certain: Detroit will be at the centre of the plan. “I think in 10 years, we’ll all look back and see a different city.”