LONDON, United Kingdom — Ten years ago, the Middle East was famous for producing fashion stars with a reverence for the rituals of couture. Most of the designers who made an international breakthrough were either wedded to the eveningwear category or moulded by red carpet style. Today, those making inroads from the Middle East to the fashion capitals are a much more diverse bunch than the generation led by Elie Saab, Reem Acra and Zuhair Murad. And that means that the more daring among them often appeal to a broader slice of the global marketplace.

“As the world gets smaller, I think our design language gets richer but, at the same time, it becomes more coherent across different cultures and markets, don’t you think?” offers Elinor Avni, who together with Tammar Edelman designs the cutting-edge accessories brand, Noritamy. 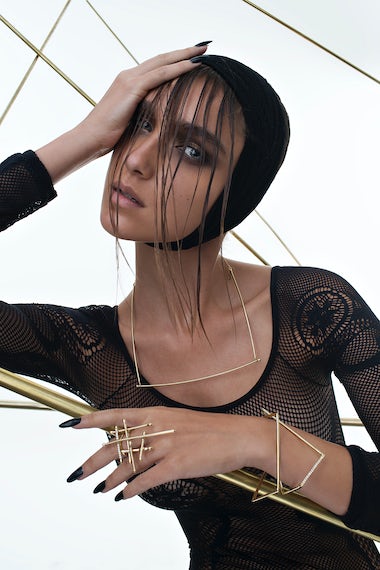 Having gained stardom in her hometown of Tel Aviv, Avni made the leap from Israel to Europe a few years ago where she started selling at the Paris trade show Premiere Classe and exhibiting at the showrooms during London Fashion Week. Now she counts tastemaker boutiques like Luisa Via Roma, Kabiri and 10 Corso Como Seoul as stockists, and says she is in talks with one of London’s major department stores.

“Before, you could often sense which part of the world a design was coming from. But these days, you can’t really tell unless a brand’s collections are specifically orientated that way. In my opinion, design can definitely benefit from a sense of place, but I think it’s more powerful if it’s working below the radar on a more subtle or even subconscious level,” she adds, gesturing toward one of her collections that infuses delicate geometric architecture with dramatic motifs of primordial nature.

Adding nuance and light and shade to apparent design contradictions seems to be a common theme for many of the young designers of Avni’s generation, regardless of where they call home across the great expanse of the Middle East, with its myriad cultural codes and clothing traditions.

“We love our culture but when we’re creating, we don’t think it belongs to a certain place; we think it’s for everywhere,” says Shiva Vaqar, one of the two Iranian sisters behind the Tehran-based label Vaqar. Boasting a “modern and casual” aesthetic, which she says is aimed at a woman who “has her own values and her own point of view”, Vaqar was nominated for this year’s LVMH Prize.

Hala Kaiksow is another case in point. A womenswear designer who hails from Bahrain, Kaiksow is inspired mostly by menswear and workwear, but tends to explore their structure through softness. “Oversized is something I love to play with,” says the young designer who is inclined to take a traditional Bahraini garment like an oversized robe and turn it into a jumpsuit. As the winner of this year’s International Fashion Showcase (IFS), Kaiksow secured victory over more than 80 designers from 24 countries in a competitive exhibition presented by the British Council and the British Fashion Council during London Fashion Week. 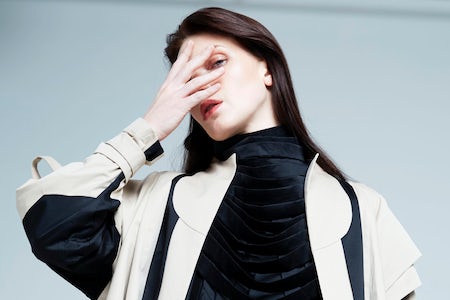 A design by Shiva and Shirin Vaqar of Vaqar | Source: Courtesy

Niamh Tuft, programme manager of the IFS at the British Council, notes how the evolving role of women at work and the challenges women face in some Middle Eastern societies can lead to unexpected design outcomes. Referring to Mashael Alrajhi, who also participated in the showcase, Tuft says: “She must be the only female designer in Saudi Arabia right now doing menswear [which is] really interesting because that’s quite confident to be able to say ‘I can dress a man’ in that society.”

The IFS award is just one of several accolades which are bringing new names to light from the region thanks to the vetting of international juries and industry leaders. Beirut-born Hussein Bazaza won last year’s Style.com/Arabia fashion prize while Bahrain-native Hind Matar took away the Cadillac Design Challenge at the same event in Dubai. Khulood Thani, a UAE national who launched her “everyday luxury” label Bint Thani in 2012, has been nominated for the 2016 edition of the International Woolmark Prize. Meanwhile, Egyptian jewellery label Sabry Marouf — designed by Ahmed Sabry and Daki Marouf — was spotted by the Vogue Italia team after being featured at Fashion Forward Dubai in 2013.

As the world gets smaller, I think our design language gets richer.

According to Katrina Judd, founder of In+Addition Consulting, a firm whose clients include a substantial Middle Eastern roster, young Middle Easter designers such as these “might inevitably draw on stories and references from their respective cultures [but] are designing for a global audience and a cosmopolitan woman of the world.”

Among In+Addition’s clients is The Kayys, a Qatari brand by three sisters whom Judd first discovered on social media. “They had a strong Instagram following early on and, at the time, it was one of the only labels to be creating contemporary daywear rather than eveningwear, which was so generally typical of the region,” she says. 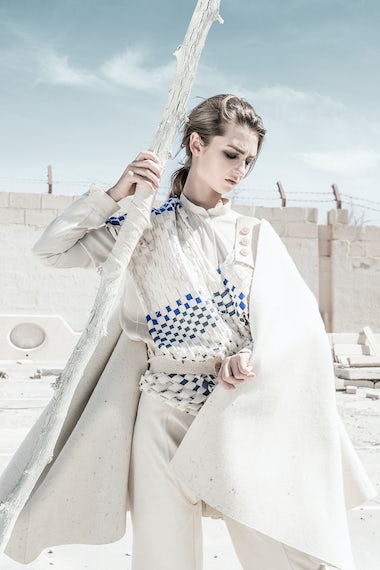 Propelling these designers forward is not only the power of social media but also an increasing number of regional support platforms and initiatives (although there are still relatively few in comparison to those in the Europe or North America).

“The [regional] industry has grown so much; we’ve come a long way in the last 10 to 15 years,” says Tala Hajjar, founder of the Starch Foundation, a non-profit support scheme that helps to launch Lebanese designers. However, the lack of fashion schools and specialist educational institutions remains a big challenge for aspiring designers in the region.

“We had no design schools in Lebanon until recently. Each year, more are cropping up and more designers are enrolling. It has become culturally more acceptable to become a fashion designer [now whereas before] it was regarded as not a real profession like an engineer or a doctor,” says Hajjar, who was the winner of this year’s IFS curation award.

“These barriers are now coming down [and] you can see it with the noise that’s being made internationally,” she continues. “All of this combined with Fashion Forward in Dubai, there’s so much going on.”

The Style.com/Arabia Fashion Prize, Cairo Fashion Nights, Riyadh Fashion Days and the aforementioned Fashion Forward in Dubai are a few examples of such platforms. But it is the launch of Dubai Design District’s (d3) ambitious creative-meets-retail initiative, which has insiders most excited. By 2018, d3 plans on creating a one-million-square-foot “creative community”, a place from which designers from the region and beyond can run their businesses (and are being encouraged to relocate to do so); and where fashion concept stores will exist too.

“It will be like a Box Park [London’s pop-up mall of fashion and lifestyle stores in Shoreditch] of super dimensions,” describes Stefan Siegel, founder and chief executive of Not Just A Label, the designer platform for showcasing and nurturing fashion talent from around the world, which has recently just announced a partnership with D3. The two will join forces to champion the region’s talent. 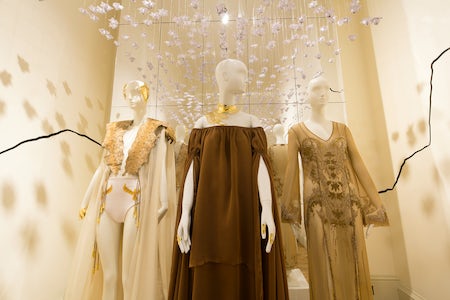 “Now there is this phenomenon…where they say, instead of importing all of these Western brands, let’s look at what we can produce [locally]. There is a sense of discovery for engaging with their own talent,” he says.

According to Susan Sabet, the growing local demand for local design is key to helping nurture some designers before they crossover from the Middle East to the fashion capitals of the West. “Like everywhere in the world, consumers here are constantly looking for new buys. The quest for young, unique local brands has spilled over to consumers in Middle Eastern markets too,” says Sabet, the Egyptian publisher of the pan-Arab fashion magazine Pashion.

“Those who find the right mix of local inspiration adapted to international trends are on the right path here,” sums up Sabet, whose curation for the Egypt pavilion at IFS saw her bring home a special mention for the country award. “But above all else — and no matter where you are from — they have to be innovative on a global level.”

Disclosure: The Business of Fashion was represented by Robb Young on the jury of this year’s International Fashion Showcase.